The New York Times was appalled! In late May, the paper splashed across its front page – along with a large photo – the story of seven Palestinians in Gaza who were denied visas to attend U.S. universities on Fulbright scholarships they’d been awarded.

Multiple stories followed, along with a finger-wagging editorial, the message of which was that bungling and benighted Israelis had thwarted the educational advancement of innocent Palestinians who sought nothing more than advanced degrees.

Congratulating itself, the paper reported on June 6: “When Secretary of State Condoleeza Rice read last Friday of the cancellation of the Fulbright grants, she told her lieutenants to get the Israelis to let the grant recipients out and to reinstate the scholarships, and that is now happening.” (Click here for CAMERA’s response to the initial Times stories on the Fulbrights.) 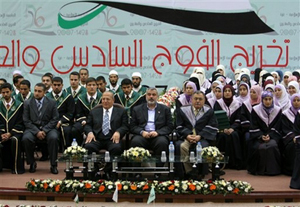 At the same time, the exultant New York Times coverage notably neglected information reported in the New York Sun on June 20 that there were potentially serious questions about several of the Fulbright winners. According to the Sun’s Eli Lake, Fidaa Abed, Osama Dawoud, and Zohair Abu Shaban “have studied or taught at the Islamic University of Gaza.” Lake cited Israeli news reports that kidnapped soldier Gilad Shalit had been held captive at the same university at one point and that rifles and rocket launchers had been stored there.

He quoted U.S. Congressman Mark Kirk faulting the State Department for allowing the Fulbrights to be awarded to students associated with Islamic University. Kirk said such action seemed “on its face” to be “a direct violation of new U.S. law.”

Kirk called on the inspector general of the State Department, Harold Geisel, to make sure the Fulbright winners were vetted through the U.S. Agency for International Development’s Terrorist Screening Center.

Lake reported a letter to Geisel from Kirk that quoted Jameela El Shanty, a professor at the Islamic University who said: “Hamas built this institution. The university presents the philosophy of Hamas. If you want to know what Hamas is, you can know it from the university.” 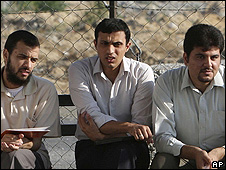 And so it came to pass eventually on August 5, the New York Times had to report that all might not be on the up-and-up with every one of the Fulbrights. While three were said to be in the United States and one had changed her mind about leaving Gaza, the three others cited by Eli Lake were, indeed, on closer inspection raising concern.

Seemingly annoyed, the Times began its story saying: “The State Department has, for a second time in two months, reneged on its offer to three Palestinians in Gaza to study in the United States on Fulbright grants, this time citing unspecified security concerns.”

The reporter then recounted the faltering efforts of these three to reach the U.S. with reference to initial U.S. irritation that Israel proffered only “broad accusations of links to Hamas.” In the 10th of 11 paragraphs in the story, the reporter notes that Israel provided “more specific information” leading to the State Department rescinding the Gazans’ entry into the U.S.

Evidently something in that information alarmed the Americans, who, as the Times relates, refused entry to one of the three students who reached Washington only to be turned back to the Middle East.

Nowhere, however, did the reporter indicate the concerns of Congressman Kirk and the information regarding the Islamic University of Gaza.