In response to CAMERA's communication with The Times about the reference to a non-existent checkpoint, The New York Times yesterday corrected. See below for a detailed update.

"Today, even on the calmest days, Palestinian children often tell emotional stories of crossing the checkpoint on the bus ride in from East Jerusalem to West Jerusalem," wrote Ruth Ebenstein in her New York Times Opinion column on a heart-warming initiative to bridge the geopolitical, religious, language and nationality gaps between Muslim and Jewish school-aged children via social and educational encounters in Jerusalem's Bible Lands Museum ("Child's Play Across the Palestinian-Israeli Divide," Feb. 14).

The column's detail about traversing the dreaded checkpoint, presumably manned by Israeli soldiers that the Palestinian children perceive as "threatening and scary," as their teacher put it, juxtaposed with touching descriptions of exchanged smiles between girls who don't share a common language but learn together "through art, history, religion and play time" and "homemade Arabic-and-Hebrew glossaries," heightens the column's narrative element, painting a picture of young children facing down adversity and oppression to find unlikely friendship against all odds.

Author Ruth Ebenstein, who has taught others storytelling skills, knows the tools of the trade.

The checkpoint is a compelling detail. But it's not true.

There are no checkpoints separating eastern and western parts of Jerusalem, a fact that Israel's Police Spokesperson Unit confirmed yesterday in an email to CAMERA.

During the 2015 "knife intifada," when Palestinians carried out numerous stabbing and other attacks against Israelis, Israel temporarily erected checkpoints and unmanned barriers, which were long since dismantled. While there are checkpoints in the Jerusalem area located between Jerusalem and the West Bank, the temporary checkpoints in between east Jerusalem and west Jerusalem were dismantled more than five years ago. (Nevertheless, this is not the first time that a guest writer at The New York Times has falsely alleged restrictions on freedom of movement for Jerusalem Arabs.)

I loved reading about this lovely initiative. But what checkpoints are there now btwn eastern, western parts of Jerusalem? Those in place for short period were dismantled during 2015 "knife intifada" AFAIK. Can you please clarify? @nytimes pic.twitter.com/2D3arDp59n

Thus, "emotional stories" of the Palestinian children "crossing the checkpoint on the bus ride in from East Jerusalem to West Jerusalem" are just that: emotional stories. The non-existence of the checkpoint in question begs the question: Did the children really tell the stories, or was that an embellishment on the part of the adult author, identified by the Times as "an American-Israeli journalist, historian, public speaker and peace activist"? Indeed, according to Ebenstein's own telling, the encounters are focused on art and play, not checkpoints, terrorism and politics. She wrote:

In The Image of Abraham, the act of reaching-across-the-divide is subtle, even secondary. “Peace” and “coexistence” aren’t mentioned. Learning is threaded through art, history, religion and play time. This entry point is less charged than the Israeli-Palestinian conflict, as the museum’s Arabic Department director, Tareq Samman, has said. 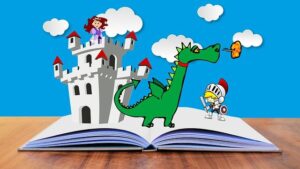 Image by Tumisu from Pixabay

So were these alleged stories something that the children shared directly with the author, between rounds of Chinese jump rope and icebreaker games, perhaps with the help of a translator? Ebenstein didn't say. Her syntax about the children's storytelling is also puzzling: "Today, even on the calmest days, Palestinian children often tell . . ." On a particular day, children "often tell" stories about a checkpoint? What does that even mean?

"Whether presenting their versions of real events or making up tales of adventure and discovery, children enchant us with their stories," explains the book The Stories Children Tell by developmental psychologist Susan Engel. "But the value of those stories goes beyond their charm. Storytelling is an essential form through which children interpret their own experiences and communicate their view of the world. Each narrative presented by a child is a brushstroke on an evolving self-portrait - a self-portrait the child can reflect on, refer to, and revise." 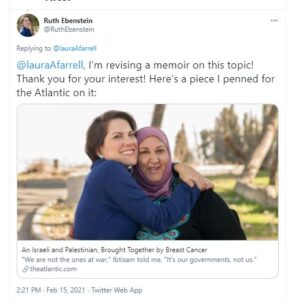 The role of storytelling in the evolving self-portrait resonates with Ebenstein's case, who has tweeted  "I'm revising a memoir on this topic!" In her Times Opinion piece about the children participating in "The Image of Abraham" program, she drew on her own story. "For me, a person-to-person experience did spark a far-reaching shift," she recounted as she launched into a closing paragraph about her friendship with a Palestinian woman who lives across the separation barrier.

Whatever the origins of the checkpoint narrative enhancement, its presence in a New York Times piece dovetails with the paper's increasing drift towards a "Paper of Narrative" and away from its history as the "Paper of Record."

As the paper's Ben Smith observed, "The paper is in the midst of an evolution from the stodgy paper of record into a juicy collection of great narratives."

“That’s a certain kind of storytelling that is much valued and does have this built-in entertainment quality,” The Times quoted Ann Marie Lipinski, the head of the Nieman Foundation for Journalism at Harvard, on narrative journalism. “But you can never sacrifice the reporting to that.” 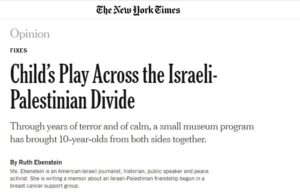 Above the headline, Ebenstein's Op-Ed carries the tagline "Fixes." If The Times fails to carry out its own fix on the checkpoint falsity, it continues to signal that it opts for storytelling over reporting.

CAMERA has contacted The Times to request a correction. Stay tuned for any updates.

In response to CAMERA's communication with editors, the newspaper appended the following correction to the bottom of the article:

An earlier version of this article referred incorrectly to checkpoints that some Palestinian students in The Image of Abraham program must cross to reach the Bible Lands Museum Jerusalem. There are checkpoints between their homes and their schools in East Jerusalem, not between West Jerusalem and East Jerusalem.

The amended online article now states: "Today, even on the calmest days, Palestinian children often tell emotional stories of crossing checkpoints to reach their schools in East Jerusalem." Children who live in east Jerusalem neighborhoods on the opposite side of the separation barrier would have to pass through a crossing if their school is on the other side.

As of this writing, there has not been a correction in the print edition.