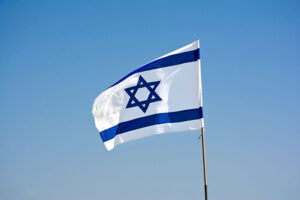 A Jan. 1 New York Times editorial urging New Yorkers to join in a solidarity march in Brooklyn today rejecting antisemitism and affirming the city’s “deep spirit of pluralism and tolerance” was encouraging, but that spirit of pluralism of tolerance was under attack by a deeply troubling reader comment in response to the editorial which a Times editor outrageously selected to highlight as a “Times Pick” (“It’s an Old and Insidious Hatred. And New Yorkers Can’t Stand for It“) The intolerant comment, which fuels more hatred, appears at the very top of the 556 comments, and instructs that Zionists should neither be welcomed nor tolerated at the march. Greg of Lyon wrote:

Stamping out anti-semitism is definitely a good idea. Attempting to stamp out criticism of Israel is definitely a bad idea, and could well lead to more anti-semitism.
Be VERY VERY CAREFUL not to allow any part of this march to be seen as a pro-Israel demonstration. Israeli flags or blue and white banners will do much more harm than good. 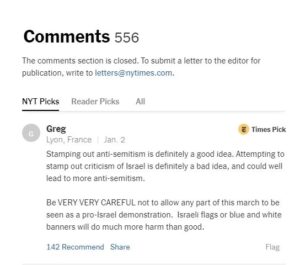 The exclusion of Zionist Jews in the city-wide hug for Jews is particularly hurtful and misguided given that the Monsey Hanukah attacker, who stabbed five Jews celebrating the holiday at a rabbi’s home, specifically sought out Zionists. As The Times itself reported: “In recent weeks, the criminal complaint said, the man, Grafton E. Thomas, had also searched for ‘German Jewish Temples near me,’ and ‘Zionist Temples’ in Elizabeth, N.J., and in Staten Island.”

When the Dyke March in Chicago banned Zionists and Israeli symbols earlier this year, the Anti-Defamation League condemned that exclusion as antisemitic. “It is outrageous that in preparing to celebrate LGBTQ pride, the D.C. Dyke March is forbidding Jewish participants from carrying any flag or sign that includes the Star of David, which is universally recognized as a symbol of the Jewish people,” ADL’s CEO Jonathan Greenblatt was quoted at the time. “Banning the Star of David in their parade is anti-Semitic, plain and simple. The LGBTQ community and its supporters are diverse, and that is part of its tremendous strength. We call on the organizers to immediately reverse this policy.”

Unfortunately, this is not the first time that editors have chosen to give the prestigious “Times Pick” designation to antisemitic comments. In 2017, editors highlighted a comment which employed the antisemitic charge that “super-rich individuals of Jewish descent . . . buy our politicians” and the anti-Jewish canard that Prime Minister Benjamin Netanyahu controls Congress and is a parasite. The Times deleted both bigoted comments in response to CAMERA’s communication.

CAMERA has urgedTimes to remove its paper’s recommendation to exclude more than 60 percent of American Jews from a march, ironically, against antisemitism. Indeed, the comment has no place in a space meant to encourage pluralism and tolerance.