“Confirmation bias,” as explained by Britannica.com, is “the tendency to process information by looking for, or interpreting, information that is consistent with one’s existing beliefs.” For a case study in confirmation bias, one need only look at the statement issued by a UN spokesperson for the Office of the High Commissioner for Human Rights (“OHCHR”) on the death of Shireen Abu Akleh.

As CAMERA has pointed out in response to several media reports, much of the details surrounding Abu Akleh’s death are unclear. Even those details subject to ostensibly forensic analyses are built on assumptions and speculations.

Yet, somehow, without detailing any new findings itself, the UN only managed to gather information “consistent with the finding that the shots that killed Abu Akleh and injured her colleague Ali Sammoudi came from Israeli Security Forces.”

Consider the claim, stated in definitive terms, that the bullets “were fired towards [Abu Akleh] from the direction of the Israeli Security Forces.” While several news outlets claim their findings suggest it came from Israeli forces, none have offered any definitive evidence of the direction of fire, only an approximate range from which the fire came.

For the UN to claim that all the evidence it gathered in this regard is “consistent,” it would have to have ignored several statements by Palestinian witnesses made immediately after the incident. While the CNN and NY Times pieces suggest the fire came from the direction of IDF vehicles over 200 meters down the road, Shatha Hanaysha – who was there with Abu Akleh – stated at the time, “We heard the sound of shooting from the occupation soldiers standing on the roofs of the buildings opposite us…” (translated from Arabic by Google Translate).

Another interview with Hanaysha, posted by AJ+, suggests the same:

Interviewer: “Did you see the sniper who was shooting at you?” 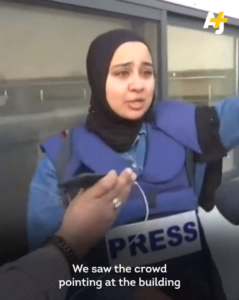 A screenshot of the AJ+ interview with Shatha Hanaysha.

Yet, the only Israeli forces position known at that time was over 200 meters down the road. Those articles pointing the finger at Israel, such as the NY Times piece, suggest the gunfire came “from the approximate position of an Israeli military vehicle.” None have pointed to any Israeli position in any buildings. Hanaysha’s statements certainly do not preclude the possibility that the fatal shot came from that IDF convoy on the road. Even honest eyewitness testimony can be unreliable for a multitude of reasons. Nonetheless, Hanaysha’s statements provide inconsistent evidence that the OHCHR statement fails to acknowledge.

Other contradictory pieces of evidence have been presented, too, but they don’t seem to bother the UN. For example, the Palestinian Authority’s investigation claimed the bullet came from a Ruger Mini-14 rifle, while Al Jazeera cited experts claiming the bullet came from an M4 rifle. One bullet cannot have been fired by two different rifles, and it’s unclear if the IDF even has or uses Ruger Mini-14 rifles.

Elsewhere, the UN’s statement hides behind vague, unsupported language that seems intended to lead readers to the conclusion that Abu Akleh was deliberately murdered by Israeli forces.

Not only is the UN certain that the bullets came “from the direction of the Israeli Security Forces,” but, the spokesperson tells us, they were “seemingly well-aimed bullets.” Made without evidence or explanation, this speculative statement comes immediately after these two sentences:

“The journalists said they chose a side street for their approach to avoid the location of armed Palestinians inside the camp and that they proceeded slowly in order to make their presence visible to the Israeli forces deployed down the street. Our findings indicate that no warnings were issued and no shooting was taking place at that time and at that location.”

The UN is relaying what those with Abu Akleh state they did. At no point does the UN provide any indication that Israeli forces saw Abu Akleh, who was over 200 meters away, let alone that they realized she was wearing press identification. Even the NY Times investigation “found no evidence that the person who fired recognized Ms. Abu Akleh and targeted her personally” and “was unable to determine whether the shooter saw that she and her colleagues were wearing protective vests emblazoned with the word Press.”

Vague language is used elsewhere in ways that seem intended to lead readers to assumptions of Israeli guilt. For example, the spokesperson tells us:

“…the shots that killed Abu Akleh and injured her colleague Ali Sammoudi came from Israeli Security Forces and not from indiscriminate firing by armed Palestinians, as initially claimed by Israeli authorities. We have found no information suggesting that there was activity by armed Palestinians in the immediate vicinity of the journalists.”

First, it should be noted that while Israel suggested Abu Akleh could have been killed by indiscriminate firing by Palestinian terrorists, nothing in Israel’s statements can be interpreted as ruling out other explanations. To the contrary, Israel has acknowledged from very early on that “it is not possible to unequivocally determine the source of the gunfire,” but that it could have been either Israeli or Palestinian gunfire that hit Abu Akleh.

Second, the wording leaves much to be desired. By “immediate vicinity,” the UN seems to be evading the question it had just set up. If the IDF suggested it could have been “indiscriminate firing by armed Palestinians,” that wouldn’t require that they be in the “immediate vicinity” of Abu Akleh. Rather, that would simply require they be at the approximate distance that audio analysis suggests the bullet was fired from.

The NY Times investigation admits there were armed Palestinians within that range. While it also claimed, based on an image of those terrorists, that they would not have had a line of view toward Abu Akleh from the street, that leaves unaddressed the obvious possibility they could have moved between the period of time that image was taken and the moment Abu Akleh was shot. The ultimate point, however, is that Palestinian gunmen were in the vicinity, within the general range from which the fatal bullet could have been fired.

The UN’s word choices tell the audience half-truths that, yet again, seem intended to paint Israel in a negative light. The spokesperson says, “It is deeply disturbing that Israeli authorities have not conducted a criminal investigation.” This is a bizarre statement. Israel has and still is conducting an investigation. What the OHCHR seems to be saying, in effect, is that the investigation must proceed into a criminal investigation, notwithstanding the fact that no evidence of criminal intent has been presented.

It would seem the UN is more interested in optics and narrative-building than in actually getting to the bottom of the matter.

Amidst all the slanted, vague language and half-truths, a charitable reading of the UN’s claim of all the evidence being “consistent with” Israeli guilt is that it meant it in the sense that all the available evidence would, theoretically, fit with the hypothesis that the shots came from the Israeli forces. But that’s not the same as saying the evidence is conclusive. As any scientist could tell you, there can be many consistent hypotheses with the same data. If the UN meant “consistent with” in this sense, why did it not also evaluate the other possibilities? Why is it so sure that there needs to be a criminal investigation at this point in time, and if it has such evidence of a criminal intent behind the shooting, why has it not provided it?

One hypothesis, of course, is that the OHCHR doesn’t employ rigorous scientific standards in its investigations. Instead, the hypothesis might go, UN institutions seek first to declare the Jewish state guilty, and then go about finding the “evidence” that fits.