“Only a U.S. investigation could decide who shot Abu Akleh in a way that would put the matter beyond dispute.” That’s the ostensible premise of a June 7, 2022 article in The Atlantic, and on its face it’s not a bad one. The problem, however, is that writer Yasmeen Serhan and her editors seem to have already concluded what the outcome of such an investigation should be. ( “The United States Must Stand Up for One of Its Own.”)

The article’s subheading gives away its game: “If the Biden administration refuses to investigate the killing of Shireen Abu Akleh, those who target American journalists will have impunity.” No one on either side has alleged that Palestinians have “targeted” Abu Akleh. The baseless claim that Abu Akleh was intentionally targeted has been made only about one side, Israel, and it came most prominently from CNN and its witness, Shatha Hanaysha. Serhan writes, “A recent review of the available evidence by CNN—including video, photography, eyewitnesses, and geo-data—suggested Abu Akleh was ‘shot dead in a targeted attack by Israeli forces.’”

But, as CAMERA and others have explained, CNN’s work on this issue was shoddy at best, and its “review of the available evidence” was selective. CNN’s main witness, Shatha Hanaysha, has promoted terrorism as a method of keeping Jews from even touring the West Bank. On the same day in 2019 that a member of the Popular Front for the Liberation of Palestine detonated the bomb that killed 17-year-old Rina Schnerb, Hanaysha tweeted, “Maybe this attack would become a model to follow, which would make ‘hiking trips’ in the hills and plains of West Bank, an adventure of undesirable consequences.” (Translation by CAMERA Arabic. The tweet has now been deleted.)

Regarding Abu Akleh, Hanaysha told a credulous CNN reporter, “but I think they want to kill us. This is why they shoot. I don’t have another reason why they shoot. And they know that we are journalists.” Rather than push back with questions such as, “how do you know what they were thinking?” or, “why would Israel intentionally target journalists?” CNN egged her on, saying, “it felt targeted?” Hanaysha responded, “Yeah….” But feelings are not evidence. 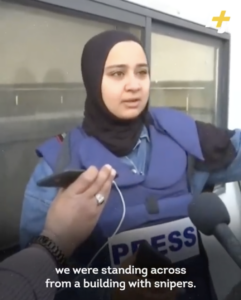 Even more damning is a video interview that Hanaysha gave to Al Jazeera on the day that Abu Akleh was shot, in which she states that the shots that killed Abu Akleh came from snipers in a building. These statements directly contradict both CNN’s conclusion that the shots that killed Abu Akleh were fired from Israeli military vehicles about 200 meters away, and Hanaysha’s claim that there were no Palestinian gunmen in the area at the time.

But CNN, and in turn, The Atlantic, overlooked the Al Jazeera interview.

While even the Guardian has acknowledged that the circumstances surrounding Abu Akleh’s death are still in dispute, Serhan quotes an array of pundits known for anti-Israel animus such as Dalia Hatuqa, Matt Duss, and Tareq Baconi, president of the board of the anti-Israel group Al-Shabaka, all of whom implicitly or explicitly agree that Israel is to blame.

Serhan asserts that, “violence against journalists is not uncommon in Israel and Palestine.” Of course, there is no sovereign entity known as “Palestine,” and mainstream news outlets have rejected such terminology. Nor does Israel intentionally target journalists in a way that could remotely be deemed violence “against” them. In contrast to her concern over alleged Israeli actions, moreover, Serhan seems to ignore treatment of journalists under the Palestinian Authority, for example, Abdulrahman Thahir, who was sentenced to three months in prison “for defaming authorities” earlier this year, according to the Committee to Protect Journalists, or the 35 journalists who, according to Reporters without Borders, were attacked in July of 2021 while covering protests against the PA government.

Absurdly, Serhan compares Abu Akleh’s death to that of Daniel Pearl, the Jewish Wall Street Journal reporter who was beheaded on video by terrorists in 2002. While it is still unknown whether the bullet that killed Abu Akleh came from a Palestinian or an Israeli gun, it was almost certainly accidental, and such comparisons trivialize premeditated murder.

Of course, this is an opinion piece, so Serhan has the right to be one-sided – as she is in her description of Abu Akleh’s funeral, and in her comment about the death of another Palestinian woman, a purported journalist, earlier this month in Hebron. But it’s her pretense at objectivity that grates: “We need an investigation! (But we already know the outcome….)” is the pseudo-journalistic theme of this article.

Her concluding paragraph is no different. Serhan writes, “the Biden administration still has the opportunity to determine definitively who killed Shireen Abu Akleh and turn her case into a deterrent for those who might otherwise have little compunction about murdering members of the press.” This sentence perfectly encapsulates the article. The beginning of the sentence disingenuously claims to seek a definitive determination from the Biden administration, but the end endorses a foregone conclusion.