See update and Times correction below.

In a report published Aug. 31, 2003  (Israeli Strikes Kill 2 Militants and a Girl), New York Times correspondent James Bennet mistakenly asserted that no Israelis had been injured in Qassam rocket attacks:

While Hamas has not successfully sent suicide bombers into Israel from the Gaza Strip, it has repeatedly fired crude rockets over Gaza’s fenced boundary. The attacks have not caused any injuries, however. Israeli security officials said one of the men killed today, Mr. Akel, had been involved in manufacturing and firing the rockets …

In fact, a number of Israelis, including infants, have been seriously wounded by Qassam rockets. One 16-month-old infant, in particular, suffered two broken legs and shrapnel wounds to his head, cheek and eye when a Qassam rocket exploded a few yards from where he was playing. In other cases the rockets have narrowly missed hitting crowded schools and factories. By misstating the results and the danger of the Qassam attacks, and in the next sentence reporting Israel’s retaliation against a Qassam ringleader, the Times article tends to call into question the legitimacy of the Israeli reprisal. 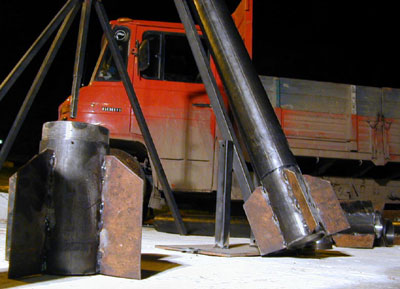 Had the Times reported the true impact of the Qassam rockets, including their large size – six feet long and carrying a payload of more than 10 pounds of high explosives – readers might have better understood why Israel is so determined to prevent the Palestinians from building or firing this new terror weapon.

Qassam-related injuries ignored by the Times include:

UPDATE: In response to a note from CAMERA the Times on September 3, 2003 printed the following correction:

Because of an editing error, an article on Sunday about Israeli tank and missile attacks that left two Palestinian militants and an 8-year-old Palestinian girl dead misstated the toll taken by crude rockets fired by Hamas over Gaza’s fenced boundary. While they have indeed caused no injuries in recent days, rockets have damaged several homes and factories over the last 18 months, leaving Israelis suffering from shrapnel wounds, broken limbs, smoke inhalation and shock.