After Israel approved building a new neighborhood in Ma’aleh Adumim, a few miles east of Jerusalem, many news reports indicated that such building is objectionable because it would prevent Palestinians from controlling “contiguous territory” in the West Bank, both cutting them off from Arab neighborhoods in eastern Jerusalem and bisecting the northern and southern areas of the West Bank. These charges – an extension of the accusation that Israel is trying to separate the Palestinians into “cantons” or “bantustans” – are false. Moreover, they demonstrate a double standard in that they advocate contiguity for Palestinians by cutting off contiguity for Israelis.

The most blatant hypocrisy was demonstrated by a March 29, 2005 Ha’aretz editorial entitled “Provocation in Ma’aleh Adumim.” The editorialist posited:

…it is difficult to accept the revelation that the government plans to build another 3,500 housing units in the area known as E-1, between Jerusalem and Ma’aleh Adumim, and thus obstruct the territorial contiguity needed for a Palestinian state.

Acknowledging that “the chance that [Ma’aleh Adumim] will be evacuated is nil,” he/she asserted that:

Logic says the area [between Ma’aleh Adumim and Jerusalem] should be preserved for Palestinian construction.

In other words, Ma’aleh Adumim should be “cantonized” to allow the Palestinians more convenient passage through the West Bank and Jerusalem. The Ha’aretz editorial is clearly spelling out what others in the media only imply – that Palestinian contiguity (in fact, not contiguity but convenience) should be preserved at the expense of Israeli contiguity.

But even the question of contiguity for Palestinians is contrived. Palestinian contiguity in the West Bank would be no more cut off with the so-called E-1 corridor than would Israeli contiguity if Israel were to withdraw to its pre-1967 borders, even with slight modifications.

Update: In fact, the residential area in E1  will cover no more than 30-35% of the plan. Included in the E1 plan is a garbage collection site which would serve both Israelis and Palestinians, surrounded by open space.  Most of the area is planned as “open space.”

As for Palestinian access to Jerusalem, it would not be precluded by building in a corridor between Ma’aleh Adumim and Jerusalem.

The building project, [Palestinians] say, will not only cut East Jerusalem off from Palestinian communities in the West Bank, but will place a wide wedge of Jewish homes between the northern and southern West Bank. That would be a blow to Palestinian hopes for controlling contiguous territory to form a nation. (3/22/05)

Critics of settlement expansion said the extension of Maaleh Adumim would nearly bisect the West Bank and seriously set back the Palestinian goal of establishing a contiguous independent state – an aim also articulated by President Bush. (3/22/05)

Greg Myre also touched on the idea in the New York Times, writing that

an expanded Maale Adumim would serve as a barrier between the northern and southern parts of the West Bank. Palestinians traveling between the two parts would face a lengthy detour… (3/22/05)

The American Heritage Dictionary defines contiguous as continuous without a break or a continuous connection. Regarding Israel and the West Bank, the concept and interpretation of contiguity can best be understood by examining a map of the area. 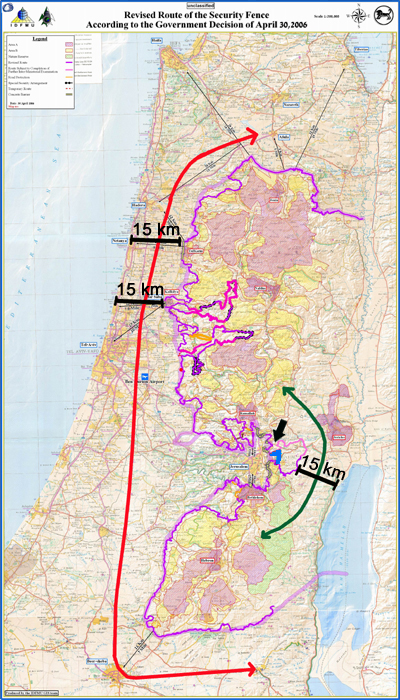 The black X marks the approximate location of the new neighborhood near Ma’aleh Adumim. To the west of the X is Jerusalem. The red line surrounding the X is the planned route of the security barrier, which will encircle Ma’aleh Adumim and Jerusalem.

Those who charge that Israeli building in Ma’aleh Adumim severs north-south contiguity disregard the fact that Palestinian-controlled areas would be connected by land east of Ma’aleh Adumim (marked on the map) that is at its narrowest point ~15 km wide.

Moreover, Israel proposes to build tunnels or overpasses to obviate the need for Palestinians to detour to the east through the corridor.

Ironically, many of those who argue for greater contiguity between Palestinian areas, at the same time promote Israeli withdrawal to its pre-1967 boundaries, which (even with minor modifications) would confine Israel to a far less contiguous territory than that of the West Bank. As shown on the map above, there is a roughly 15 km wide strip of land separating the Green Line (and the Security Fence) from the Mediterranean Sea (near Herzliya). Also shown is the circuitous route necessary to travel via this corridor between northern and southern Israel. (e.g. from Arad to Beit Shean.)

Palestinians Cut Off From Eastern Jerusalem

The Washington Post‘s John Ward Anderson has reported that building around Ma’aleh Adumim is, according to anti-settlement activists, “the final step in sealing off north and east Jerusalem from Palestinians living in the West Bank.” (Feb. 7, 2005)

This claim is also untrue. Access to Jerusalem through Abu Dis,  Eizariya, Hizma and Anata is not prevented by the proposed neighborhood, nor would it be precluded by a string of neighborhoods connecting Ma’aleh Adumim to Jerusalem.