An Agence France Presse photo caption yesterday whitewashed an Islamic Jihad terrorist, saying only that he was a Palestinian killed in an Israeli air strike, and omitting that he was reportedly preparing to launch rockets at Israel when Israel’s air force fatally fired on him. After Israel killed Islamic Jihad commander Baha Abu al-Ata yesterday, a senior terrorist responsible for numerous recent rocket attacks against Israeli civilians, including one in August targeting a major children’s festival with thousands in attendance, the terror organization bombarded southern and central Israel with over 200 rockets during the course of the day. 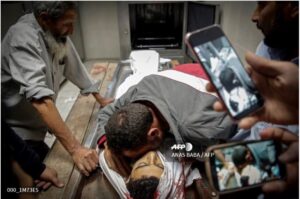 A relative of 20-year-old Palestinian Mohammed Hamuda, who was killed in an Israeli air strike, mourns over his body at the hospital morgue in Jabalia in the northern Gaza Strip on November 12, 2019. Israel’s military killed a commander of Palestinian militant group Islamic Jihad in a strike on his home in the Gaza Strip early, prompting retaliatory rocket fire and fears of a severe escalation in violence. ANAS BABA / AFP

As Times of Israel reported:

The Hamas-run Gaza Health Ministry releases the names of the three Palestinians killed in the Gaza Strip since Tuesday morning.
The three are named as Palestinian Islamic Jihad commander Baha Abu al-Ata, 42, his wife Asma Abu al-Ata, 39, and Mohammed Hamouda, 20. Hamouda was killed in an Israeli strike on a cell preparing to launch rockets toward Israel.
In addition, the ministry says, 18 people have been wounded.

Gaza‘s health ministry reported one Palestinian killed in that strike in the northern Gaza Strip.

CAMERA urged AFP editors to amend the caption to reflect the fact that Hamuda was an Islamic Jihad terrorist who reportedly was preparing a rocket when Israel’s air force fired on him. As of this writing, AFP has yet to revise the caption but subsequent AFP captions about other Islamic Jihad terrorists killed by Israel as they were preparing rockets to include the key information about their rocket-launching preparations. 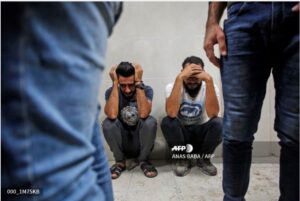 Relatives of Palestinian Zaki Ghanama, 25, mourn in the morgue of a hospital in Beit Lahia in the northern Gaza Strip on November 12, 2019, following an Israeli strike. Israel said it had carried out an air strike against militants preparing to launch rockets. The incident took place amid an escalation in violence between the two sides that followed an Israeli strike that killed an Islamic Jihad commander in the Gaza Strip. ANAS BABA / AFP