In response to timely communication from CAMERA’s Israel office, Agence France Presse deletes from both English and French articles today the erroneous claim that the United Nations considers Israel’s occupation of the West Bank “illegal.” Today’s story, “Norwegian pension fund sells off groups linked to Israeli settlements” (5:18 am GMT), had erred: “The occupation of Palestinian territories is considered illegal by the United Nations.” 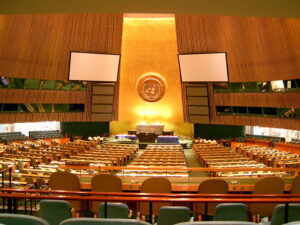 CAMERA contacted AFP editors and noted that while the UN has made clear that any Israeli annexation of the West Bank would be “inadmissible,” and has also labeled Israeli settlements “illegal,” none of its post-war resolutions — General Assembly resolutions 2252, 2253, 2254, and 2256, and Security Council resolutions 236, 240, and 242 — argued that the capture of the West Bank from Jordan and subsequent occupation was unlawful.

The drafters of Security Council Resolution 242, which called for an Israeli withdrawal from unspecified “territories occupied in the recent conflict,” have repeatedly clarified that their resolution calls for any Israeli withdrawal to be to “secure and recognized boundaries” negotiated in peace talks between the parties to the war, and do not regard the occupation as illegal:  “Until that condition is met, Israel is entitled to administer the territories it captured – the West Bank, East Jerusalem and Gaza Strip – and then withdraw from some but not necessarily all of the land,” explained Eugene Rostow, one of the resolution’s drafters and an Under Secretary of State for Political Affairs in President Johnson’s administration.

In 2019, Bloomberg corrected the identical error and The New York Times twice corrected after similarly misreporting that the international community considers the Israeli occupation illegal. Moreover, also in 2019, InfoEquitable, a French media-monitoring organization which works closely with CAMERA, prompted an AFP correction of this very point.

Following CAMERA’s correction request, AFP commendably updated the English and French articles, at 10:28 am GMT 10:03 am GMT respectively, deleting the erroneous sentence from the English, and replacing “occupation” with “settlements” in French. The erroneous version still appears on France 24, and CAMERA calls on the news site to correct.

For the French version of this post, please see InfoEquitable.