In his page-one July 2 article “A day at sea with Gazan fishermen,” The Los Angeles Times’ Nabih Bulos incorrectly stated that the farthest that Israel has permitted Gaza fishermen to venture is 12 nautical miles. The article errs: “Although the Oslo peace accords between Israel and the Palestinians in the early 1990s obligated Israel to allow boats to go as far as 20 nautical miles from Gaza’s shore, the maximum it has ever permitted is 12.” (Emphasis added.) 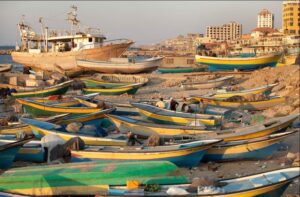 In fact, for much of the last year, as recently late April, Israel permitted Gaza fishermen to travel up to 15 nautical miles from the coast in search of their catch. On several occasions, following Palestinian attacks from the Gaza Strip against the Jewish state, Israel reduced the 15 nautical mile zone in response to attacks from the Gaza Strips. For instance, the UN’s Office for the Coordination of Humanitarian Affairs reported in its “Protection of Civilians Report April 13-26, 2021“: “On 25 April, the Israeli authorities reduced the permissible fishing zone off the southern Gaza coast from 15 to nine nautical miles . . .”
Likewise, on Sept. 1, 2020 Deutsche Presse-Agentur reported (“Israel reopens key border crossing with Gaza following ceasefire”):  “In addition, the fishing zone in the Gaza Strip was expanded to 15 nautical miles (around 28 kilometres) after Israel closed it two weeks ago in response to attacks from Gaza.”
Agence France Presse reported on Aug. 12, 2020 (“Israel cuts Gaza fishing limits over incendiary attacks”): “The Israel defence ministry said in a statement that the zone was cut from 15 nautical miles to eight ‘immediately and until further notice.'”
AFP reported on Feb. 19, 2020 (“Israel eases Gaza restrictions over ‘relative calm'”), that following a period of relative quiet after a wave of rocket attacks and incendiary balloons: “‘As long as calm is maintained, Israel will extend the fishing zone to 15 nautical miles (on Wednesday) and issue 2,000 new permits’ for Gaza residents to enter Israel, said a statement by COGAT, the ministry’s unit in charge of civilian affairs in the occupied Palestinian territories.”
In a separate factual error, Nabih Bulos errs that since the fighting between Hamas and Israel that started May 10, Israel “has since permitted fishermen to go six nautical miles from the shore.” In fact, a June 24 COGAT (Israel’s Coordinator of Government Activities in the Territories) statement reads: “In light of the security calm during the last week, following a security assessment and approved by the political echelon – it has been decided to to [sic] expand the fishing zone in the Gaza Strip from six to nine nautical miles . . . . “
Information from Gisha, an Israeli organization which is highly critical of Israel’s blockade of the Gaza Strip, refutes both of Bulos’ errors. Gisha reported on July 1: “On June 25, Israel expanded the limit to nine nautical miles off the coast. Before the escalation, access was permitted up to a maximal distance of 15 nautical miles in some areas of the sea.”

Bulos is co-author of a separate June 7 Times article which contained yet another uncorrected blatant factual error about the Gaza Strip, greatly overstating the unemployment rate in the Hamas-rule coastal territory. CAMERA has contacted The Los Angeles Times to request correction of the two fishing zone errors, and to remind editors of the outstanding obligation to correct the erroneous figure for the territory’s unemployment rate.

In addition, it’s troubling that Bulos irresponsibly retweeted a blatantly false tweet by Al Jazeera reporter Laila Al-Arian accusing the international media of “obscur[ing] the reality” by failing to cover the “ongoing killings of Palestinians.” To that end, Al-Arian falsely alleged that settlers shot to death a Palestinian who did nothing at all while standing on his roof. In fact, as international media outlets such as Reuters and AFP reported, the Israeli military said Farid Ali Hasan lobbed an explosive device at troops, who fired back at him.

Who exactly is obscuring reality? The reporter for Al Jazeera — (a media outlet which won accolades from Hamas for its favorable coverage) — who concealed that the Israeli military said troops fired on a Palestinian who threw an explosive device at them, or the international media outlets which included that information?
What business does a Los Angeles Times reporter have amplifying such shoddy, problematic Al Jazeera reporting?

Troubling to see @latimes reporter @nabihbulos retweeting this false tweet from @AlJazeera reporter. Hasan was reportedly shot by IDF, not settlers, after he threw an explosive device at them @LATreadersrep pic.twitter.com/JvNvHevzCV

For some strange reason, Al Jazeera has cult status in some Western circles.

It shouldn’t. It should be viewed with contempt.

Here’s an updated “greatest hits” list to underscore that point: