Continued settlement construction by Israel in the West Bank has slowly eaten away at hopes for a two-state solution to the conflict.

The settlements are considered illegal under international law and are built on land that the Palestinians see as part of their future state.

Israel argues that Palestinian intransigence, violence and incitement are the main impediments to peace. 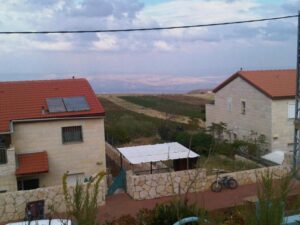 While the Palestinian view is presented as fact: “Continued settlement construction by Israel . . . has slowly eaten away at hopes,” the Israeli view that Palestinian intransigence, violence and incitement has slowly eaten away at hopes for peace is cast as just that with the qualifying language, “Israel argues.”  Why the double standard?
Notably, the French version of the same article more objectively reports (CAMERA’s translation):

Many countries regard the settlements as an obstacle to peace, and in particular to the creation of a Palestinian state alongside Israel, as part of the so-called two state solution, embraced by a large part of the international community.

Following communication from CAMERA, AFP’s article today removed yesterday’s editorializing in which the view that settlement construction jeopardizes the two-state solution was depicted as fact. Today’s improved language attributes that position to Palestinians and many governments (“Israel okays homes for Palestinians, settlers before Kushner visit“):

Palestinians and many governments around the world warn that continued settlement construction by Israel in the West Bank is slowly eating away at hopes for a two-state solution to the conflict.