Hamas, the Palestinian Islamist group that controls the Gaza Strip, released a statement that did not claim the attack but blamed it on Israel’s treatment of Palestinians.
Speaking to a Hamas-controlled radio station, group spokesman Hazem Qassem said the “operation is a response to the policy of ethnic displacement practiced by Israel against our Palestinian people inside the occupied territories.” 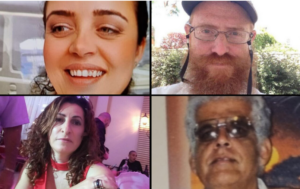 “The occupation’s crimes shall be met with heroic operations: stabbings, ramming and shooting,” al-Qanou says.

Hamas and Islamic Jihad spokesmen praised the attack. Hamas spokesman Abdel-Latif al-Qanou called it a “heroic act,” vowing the group’s “battle against the occupation continues and we will not stop.”

In the Gaza Strip, some Palestinians were seen distributing sweets to express happiness following the attack. The Hamas militant group’s spokesman, Hazem Qassem, praised the attack as “a response to the policy of ethnic expulsion” against the Arab citizens of Israel.

We affirm that this heroic operation is a link in the chain of our steadfast, heroic people’s resistance, confronting the Zionist arrogance which ventures on Palestinian blood. We call our struggle-engaged people in the rebellious occupied Negev, in the West Bank with occupied Jerusalem in its heart, and the enduring people of our 1948-occupied lands, to further escalate the confrontation against the occupation and its flocks of settlers, in defense of the land and the sanctities and in fidelity to the martyrs’ blood – until liberation and return.

In addition, the official site of Hamas’ al-Qassam Brigades published the following statement this morning:

The Islamic Resistance Movement ‘Hamas’ affirmed that the heroic Beersheba operation cuts the occupation’s hand as it continued its acts of expulsion and Judaization in the occupied Negev. […]
The movement’s spokesman on behalf of the city of Jerusalem Muhammad Hamadeh said in a press announcement that the operation’s perpetrator, hero Muhammad Abu al-Qi’an has set a great example of heroism and sacrifice. […]
Hammadeh indicated that operations carried out by the people of the occupied interior [i.e. Israel’s internationally-recognized territory – YNG] inflict the most pain and post the gravest danger to the enemy […]

In turn, Hamas spokesperson Abd al-Lateef al-Qanoo’, has saluted the perpetrator […]
Qanoo’ said that ‘this operation is in line with the anniversary of founding Sheikh Ahmad Yaseen’s martyrdom, affirming the correctness and persistence of the path of the method that the Sheikh has founded.

Five usurpers were killed and two were wounded – one severely – on Tuesday evening.

AFP’s failure to report the Hamas government’s official praise for the attack and residents’ celebratory distribution of sweets is particularly striking in light of the fact that the article did report that “dozens” of Israelis gathered at the scene “waving Israeli flags and chanting ‘Death to Arabs.'” By what professional calculation is the latter newsworthy but the former isn’t?

With research and translations by CAMERA Arabic.