Agence France Presse recently published an in-depth feature sanitizing the noisy Palestinian riots taking place at Beita as a unique grassroots effort, stripping them of their violent elements and ignoring their likeness to riots by the Gaza border. The article’s flaws are manifold, including the glaring failure to report the burning of a swastika inside a Star of David, a disturbing incident which drew the attention of the Israeli and Jewish press, but was universally ignored by the international mainstream media.

Using laser pointers and noisy horns to torment Jewish settlers across the valley, Palestinians in Beita have set themselves apart from others demonstrating against Israel’s occupation of the West Bank.

But beyond attention-grabbing tactics, protesters in the Palestinian town near Nablus insist their weeks-long campaign against the wildcat settlement of Eviatar is distinct for another reason.

They describe it as a grassroots movement, not inspired or directed by Fatah secularists who control the Palestinian Authority in the West Bank, or their rivals from the Islamist Hamas that runs the Gaza Strip.

Among the article’s multiple blatant omissions is the fact that the Beita demonstrations are also characterized by the use of explosives and the burning of tires in addition to lasers and loud horns.

Far from ‘distinct,’ the Beita riots’ tactics closely mirror the methods of the night confusion’ units which have been operating on and off for three years along Israel’s border in the Hamas-controlled Gaza Strip.

In addition, the article omits the striking case of the burning of a swastika combined with a Star of David, widely reported last month by multiple Israeli and Jewish media outlets, even as mainstream international media outlets completely ignored it.

Palestinian Media Watch reported that organizers of the protest responded to criticism of the swastika with ugly vitriol, stating: “You [Israelis] are worse than Hitler and the Nazis … Yes, we want to burn you alive.”
Also ignored is the fact that far from “distinct,” the Beita riots’ tactics closely mirror the methods of the “night confusion” units which have been operating along Israel’s borders in the Hamas’-controlled Gaza Strip on and off for three years. In both Beita and along the Gaza border, rioters lob explosives, burn tires, shine blinding lasers, and blare high volume noise. In addition, the article’s depiction of the violent demonstrations as “grassroots,” with no connection to either Fatah or Hamas, is dubious considering that Fatah‘s fingerprints are all over them.
Finally, regarding the status of the land ownership, the article reports that the protesters “say the surrounding land belongs to them.” AFP ignores that Israel’s Civil Administration is studying the case and has not yet determined to whom the land belong.
Times of Israel Further Improves AFP’s Shortcomings
Times of Israel, which frequently publishes AFP items after introducing its own edits and additions, initially published an improved version of AFP’s inadequate piece, yet it too still fell short on several points. Unlike AFP’s story, Times of Israel’s article, published Aug. 25, commendably included references in the first paragraph to the use of explosives and burning tires, along with the acknowledgment that the disturbances parallel the Gaza “night confusion” model.
In addition, while Times of Israel had edited the article to add that authorities “promised to study the land to evaluate the prospect of eventual retroactive authorization,” the additional information does not obviously address the question of ownership. Retroactive authorization could be granted if it’s found that the land is not privately owned by Palestinians, but readers wouldn’t know that from this report.
In response to communication from CAMERA, Times of Israel commendably rectified all of the omissions. The following information about the swatiska now appears prominently, in the updated article’s second paragraph:

In one incident, demonstrators burned a Star of David with a Nazi swastika within it. Palestinian protesters deemed the spectacle — roundly denounced on Israeli television as anti-Semitic — to be a way of comparing Israeli rule in the West Bank to Nazi Germany.

In addition, Times of Israel’s updated article adds the following information about the riots’ ties to Fatah (and Hamas):

Fatah officials have occasionally shown up to provide symbolic support at the nightly protests, and some of those killed or wounded during violent clashes with Israelis have been Hamas activists. But local Palestinians say they have spearheaded the movement. 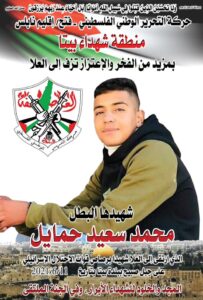 (Mohammad Hamayel, the 15-year-old mentioned in the article who was killed during Beita demonstrations this past June, was pictured in a mourning poster affiliated with Fatah. CAMERA does not have information about Hamas activists killed in Beita riots.)
In addition, on the unresolved question of land ownership, Times of Israel commendably added:

Israeli authorities have not yet determined who owns the plot, and are surveying the land over the next few months as part of the compromise which saw Evyatar’s residents leave the site. If Israel’s Defense Ministry determines that the land belongs to the state, it will be far easier to build an authorized Israeli settlement on the hilltop.