(All translations, emphases and in-bracket remarks are by CAMERA Arabic.)

Clashes between Israeli security forces and worshippers this morning, against the backdrop of hundreds of settlers entering [the Jerusalem sanctuary] to commemorate what they consider the destruction of the Temple anniversary. 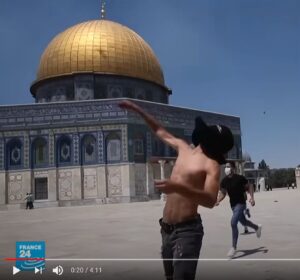 Notably, an image (at left) of running rock-throwers (including one who is shirtless) lobbing their projectiles appeared exactly as the host cited alleged “worshippers.”

With a misleading question regarding the Tisha B’Av violence, Sahali subsequently introduced commentator Khaled al-Gharabli, (whose counter-factual observations on the Israel-Hamas escalation in May previously found a welcome platform at France 24 Arabic):

Khaled, what is this anniversary, anniversary of the Temple’s destruction, which every year causes clashes and intrusions into the al-Aqsa Mosque plaza? (Emphasis added.)

That was Al-Gharabli’s signal into launch a monologue which surpassed even the excesses of Odeh, who had uncritically adopted false terminology and the Palestinian nationalist narrative. Al-Gharabli, for his part, claimed that there is “no material evidence” of a Jewish Temple on Temple Mount.

Al-Gharabli also falsely claimed that only Jewish “hardline groups” believe that the Temple stood where Temple Mount is, as if this is an unfounded matter of faith of Jewish extremists and not a consensus among Jews, Christians and Muslims for generations, supported by modern archaeology, as a 2015 New York Times correction was infamously compelled to acknowledge.

He further fabricated that Israel’s alleged archeological digs under the compound, supposedly to locate non-existent evidence of the Temples, threaten the buildings’ foundations. While allegations of Israeli digs on the Temple Mount are a mainstay of Muslim anti-Israel incitement, no such excavations have taken place in the past four decades. Meanwhile, Muslim Waqf construction continues uninterrupted.

The commentator used the terms “al-Aqsa,” “al-Aqsa plaza,” “al-Aqsa Mosque” and “the Jerusalem Sanctuary” interchangeably, thereby confounding the mosque itself, which take up a tiny portion of the Temple Mount plaza and is adjacent to the southern wall, with the entire compound.

Al-Gharabli also railed that the Israeli government’s use of the term “Temple Mount” (the same nomenclature Jews have favored for over two millennia) suggests a sinister intention to destroy the Mosque and the Dome of the Rock and replace it with a rebuilt Jewish Temple. Similarly, he implied that the fact that Jews are even allowed to enter the compound is further proof of Israel’s alleged plan to tear down the Mosque.

In addition, Al-Gharabli raised the flames by referring to “operations of Judaization” (Tahweed in Arabic) while avoiding specifics. “Judaization” is a vague term among Arabic speakers than can signify any increase of either the physical, metaphorical or imagined presence of Jews in a given place; it is often used in the context of Jerusalem with the sole intention of raising unfounded accusations. Acts of “Judaization” include, but are not limited to, the following: scholars searching for archeological findings in the Old City and its surroundings, visitors walking peacefully around the Temple Mount compound, or even a Christian individual trying to set the Al-Aqsa mosque on fire.

France24 is owned and overseen by the French government. The fact that an in-house commentator is permitted to fabricate about Judaism, Islam, history and current affairs alike, and incite with wild speculation, is alarming.

Moreover, several viewer comments inciting violence and hatred against Jews and Israelis appear in response to the video on France24’s YouTube channel. Among the vitriolic comments which have appeared for months on France24’s platform are: “Brethren, carry out stabbing attacks against the Zionists’ dogs;” “Weapon[s], weapon[s] for the Palestinian people to kill the dogs who fled the Holocaust;” and “There is no solution but deporting all Zionists from Palestine back to their countries, Russia, America and Europe and the return of its original people to it, with noble Jerusalem as its capital, with Allah’s help.”

“According to Jewish doctrine, the Temple, Solomon’s Temple, where the Ark of the Covenant was found, along with the Tablets, on which the divine Commandments came down to the Jews, this Temple was destroyed twice, according to the Jewish doctrine. Once in 589 [in fact, 586] BC, at the hands of the Babylonians, and the second time was in 70 AD at the hands of the Romans. This is a day of sadness for the Jews, a day of grief, they fast and refrain from anything of comfort, to mark or to indicate their sadness and grief of that day, the day where the Temple was destroyed and the Tables were lost. Of course nowadays it became a [Judaism] cornerstone.

“What is worrying with this issue is, I think, if this was the conduct of a few hardliners… what is worrying is the conduct of the Israeli authorities. Firstly, the digging operations are carried out with the Israeli authorities’ consent, which allow them. Why do they allow them, while it threatens al-Aqsa’s remaining in place? And they know full well that al-Aqsa is one of the Islamic faith’s, and Muslims,’ cornerstones. Why does the police allow the intrusions? The police is the one which protects those who carry out the intrusion the Jerusalem sanctuary.

“Why does Netanyahu, even when he had promised that Muslims could enter and perform their religious rituals in al-Aqsa Mosque, he never uses the word[s] ‘al-Aqsa Mosque,’ he uses the word[s] ‘Temple Mount.’ When he speaks about the al-Aqsa Mosque, he says ‘Temple Mount.’ Why does he see the Temple Mount on this place and does not see al-Aqsa while al-Aqsa is the one found [there], and we do not see Temple Mount. Does this mean that he wants to rebuild the Temple in that place? Palestinian voices accuse the Israelis that they want to enforce sovereignty on the Jerusalem Sanctuary as a first step to destroy the al-Aqsa Mosque and subsequently rebuilding the Temple.
And the conduct of Israeli authorities, by the means of allowing the digging, by the means of allowing operations of Judaization, in talking about dividing al-Aqsa plaza in time and space, by using terms like ‘Temple Mount’ regarding al-Aqsa Mosque, all of this strengthens what the Palestinians say, i.e. fears concerning the idea of rebuilding the Temple instead of al-Aqsa. And the gravity of the matter, is that here the conflict shall no longer be a conflict about occupied land and a people suffering from occupation, but rather a conflict between two religions, and religious conflicts are the most bloody.”