Victor Sorokopot, 38, and Dimitri Mitrik, 23, were just named as the two Ukrainian citizens among the five murdered in a Palestinian terror attack in the Tel Aviv suburb of Bnai Brak yesterday. Palestinian Diaa Harshemah of a West Bank village near Jenin gunned down the two Ukrainians as they sat outside a grocery store. The circumstances of the murders of two peaceful civilians on a city street within Israel’s internationally recognized lines exposing the false propaganda casting Israel as Russia and Palestinians as Ukrainians. 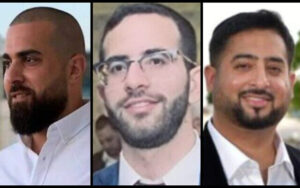 Three of the victims of the deadly attack in Bnei Brak on March 29, 2022 from left to right Amir Khoury, Avishai Yehezkel and Ya’akov Shalom (Courtesy via Times of Israel)

Embraced by anti-Israel elements, the fallacious Palestine-is-Ukraine narrative enjoyed a boost at the Associated Press yesterday. Joseph Krauss’ lengthy article, of some 1200 words, gave prominent space to its proponents (“Many in Mideast see hypocrisy in Western embrace of Ukraine”).

The response has elicited outrage across the Middle East, where many see a glaring double standard in how the West responds to international conflicts.

“We have seen every means we were told could not be activated for over 70 years deployed in less than seven days,” Palestinian Foreign Minister Riad Malki told a security forum in Turkey earlier this month.

About the Palestinian situation, Krauss detailed further down:

Israel’s occupation of lands the Palestinians want for a future state is well into its sixth decade, and millions of Palestinians live under military rule with no end in sight. The U.S., Israel and Germany have passed legislation aimed at suppressing the Palestinian-led boycott movement, while major firms like McDonald’s, Exxon Mobil and Apple have won praise by suspending business in Russia.

On social  media, the world has cheered Ukrainians as they stockpile Molotov cocktails and take up arms against an occupying army. When Palestinians and Iraqis do the same thing, they are branded terrorists and legitimate targets.

Buried deep the article’s 25th paragraph, Krauss finally suggested there may be holes in the Palestinian-Ukranian comparison. Persistent readers are told:

The Israeli-Palestinian conflict dates back more than a century — long before the 1967 war in which Israel seized east Jerusalem, the West Bank and Gaza. Most of the world considers those areas to be occupied Palestinian territory and Israel’s ongoing settlement construction to be a violation of international law. Israel portrays the conflict as a territorial dispute, accusing the Palestinians of refusing to accept its right to exist as a Jewish state.

“Only the severely context-challenged could compare Israel’s wars of defense to Russia’s invasion of its neighbor,” the Jerusalem Post said in a March 1 editorial on the topic.

About most of that context, Krauss is largely mum, a striking contrast next to the extensive airing of the arguments of those in favor of the tortured comparison. Here’s some of the essential context, ignored by Krauss, and detailed in that Jerusalem Post editorial (“The Palestinians are not like the Ukrainians“):

As to [MSNBC journalist Mehdi] Hasan’s “illegal occupation” reference, it is worth noting that Israel has been trying for the last half-century to figure out a way to end the “occupation” – one forced on it during a war it did not choose – and stay alive. Because of unrealistic Palestinian demands, as well as a greater Palestinian interest in dismantling the Jewish state than in actually building a Palestinian one, that formula has remained painfully elusive.

All those trying to paint Israel as imperialist Russia and the Palestinians as the freedom-seeking Ukrainians should keep a couple of truths in mind:

First, the Ukrainians never tried to throw the Russians into the Black Sea, nor does the Ukrainian constitution include a clause stating that Russia has no right to exist.

Second, the Ukrainians did not arm their people with explosive vests and encourage them to ride buses in Moscow and blow themselves up along with as many innocent passengers as possible.

Third, the residents of Kharkiv in northern Ukraine have not been firing rockets for nearly two decades at apartment blocks in Belograd just across the border.

Fourth, this writer adds, is the fact that not one inch of the disputed land which Krauss claims “[m]ost of the world considers … to be occupied Palestinian territory” was ever under Palestinian governance prior to the bilateral Oslo Accords in the late 1990s, a fact acknowledged in multiple media corrections, including at the Wall Street Journal, New York Times, Los Angeles Times, and Washington Post, among others.

Citizens of democratic Ukraine making Molotov cocktails are doing so to throw at tanks which are part of an unprovoked military onslaught by an authoritarian, expansionist Russian regime. Palestinians, on the other hand, who manufacture and use bombs against Israelis typically use such explosives on civilians, and are usually affiliated with anti-Semitic extremist organizations which seek Israel’s destruction.

And it is precisely that existential threat that is at the heart of the matter. If analysts seek to draw real parallels, perhaps it would be better to delve into the very essence of the conflict.

Just as Putin does not consider Ukraine a legitimate state and does not believe it should exist, so, too, do Fatah, Hamas, Iran and not a few others believe that the Jewish state has no right to exist. Just as Ukraine is fighting an existential war, Israel is facing groups financed, armed and trained by an aspiring nuclear power whose leaders have made it clear that Israel must disappear. In the words of Jibril Rajoub, former deputy secretary-general of the Fatah Central Committee and former head of the Preventive Security Force in the West Bank, “I swear that if we had a nuclear bomb, we would have used it this very morning.”

Or in the words of Ayatollah Ali Khamanei, sponsor of the above, Israel “will disappear from the map” and its territory “will certainly be returned to the Palestinian nation.”

One needn’t look further than the crumpled bodies of Sorokopot and Mikrit to grasp the vacuity of the Palestine-Ukraine analogy is: two peaceful Ukrainians civilians murdered as they enjoyed a quiet moment in central Israel. Their murderer, Diaa Harshemeh, has nothing at all in common with Ukrainians resisting Russian invasion and destruction of their homes.

Indeed, while Sorokopot’s and Mikrit’s countrymen in Ukraine are repelling the Russian troops who are attacking their home cities, Harshemeh’s countrymen are celebrating his victims’ murders.

The Jerusalem Post‘s Seth Frantzman reflected on the significance of Palestinian celebrations of the “heroic operation,” including the murder of two foreigners whose only connection to the Israeli-Palestinian conflict was their residence and work in Israel:

There is no other place in the world and no other cause that has this kind of celebration related to mass killing and passing it off as “heroic.” …

One can’t accurately call this conflict. A conflict is between two groups or states. A conflict in which a man gets up in the morning and sets off and shoots people who he has decided are sub-human, but who are in fact a diverse swath of people killed at random because they are in a state he doesn’t like; goes beyond the concept of “conflict.” …

When it became known that two Ukrainians were victims of the hate crime attack, one woman posted the photos of the victim and called it a “heroic operation.” A man replied that “no one is safe in Palestine, they will have to go back where they came from.” They post smiling faces as comments. They even laugh at the deaths. They post images of clapping and write “wherever you are, death will catch you.”

Now that Palestinians have celebrated the murder of Ukrainian foreign workers slaughtered for the crime of their presence in Israel, will AP publish a lengthy article dedicated to examining how Palestinian claims of similarity to Ukraine’s situation are baseless?