In its coverage of Saturday’s hostage-taking of Sabbath worshippers at Congregation Beth Israel Congregation in Colleyville, Tx., the Associated Press has advanced, intentionally or not, the absurdly false narrative that the terror attack was not connected to the Jewish community. The leading news agency has completely ignored statements by the Anti-Defamation League, the largest and most established American organization combatting antisemitism, along with remarks by President Joe Biden, Vice President Kamala Harris, and other senior U.S. and British officials, all indicating that the assault on Jews gathered for prayer in a synagogue on their holy day, was, unsurprisingly, antisemitic.

Meanwhile, AP has repeatedly highlighted an FBI official’s extremely poorly-worded statement pointing to the hostage-taker’s efforts to obtain the release of Pakistani terrorist Aafia Siddiqui while seemingly rejecting antisemitism as a motive — as if the former factor necessarily negated the latter. (AP’s has two spellings for her name, including also Saddiqui.) (Indeed, for thousands of years, antisemites have scapegoated Jews for a myriad of grievances, real and imagined. That’s the very nature of antisemitism.)

Right it had nothing to do with Jews but this radical Islamist targeted the Jews anyway. It’s called #antisemitism. https://t.co/yJjz41Eh23

FBI Special Agent in Charge Matt DeSarno said the hostage-taker was specifically focused on an issue not directly connected to the Jewish community. It wasn’t clear why Akram chose the synagogue, though the prison where Saddiqui is serving her sentence is in Fort Worth.

Michael Finfer, the president of the congregation, said in a statement “there was a one in a million chance that the gunman picked our congregation.”

Indeed, DeSarno’s distancing of the antisemitism motive in an attack on a synagogue carried out to force the release of a terrorist with a history of vitriolic antisemitism is an immutable fixture in AP’s coverage over the last two days. Thus, Sunday’s article reported (“Hostages safe after Texas synagogue standoff; captor dead“) :

DeSarno said the hostage taker was specifically focused on an issue not directly connected to the Jewish community and there was no immediate indication that the man had was part of any broader plan, but DeSarno said the agency’s investigation “will have global reach.”

The original headline for this article was particularly egregious, and ignited a firestorm of rebuke. It read: “Hostage taker was not focused on Jewish community, FBI says.” Though AP later amended the headline, which no longer appears on its site or on news database Lexis-Nexis, versions of that original egregious wording are still available at secondary news outlets.

Hard to fail much harder. Detecting an ugly pattern at this news agency. pic.twitter.com/ymGwUYynth

Later today, even as the FBI backtracked and finally affirmed the obvious — that the synagogue hostage-taking incident is directly connected to the Jewish community — the news agency used this occasion to repeat DeSarno’s earlier attempt to disassociate the attack from antisemitic motives. Thus, Bleiberg and Tucker report this morning (“Texas rabbi: Security training paid off in hostage standoff“):

FBI Special Agent in Charge Matt DeSarno had said Saturday night that the hostage-taker was specifically focused on an issue not directly connected to the Jewish community. It wasn’t clear why Akram chose the synagogue, though the prison where Siddiqui is serving her sentence is in nearby Fort Worth.

On Sunday night, the FBI issued a statement calling the ordeal “a terrorism-related matter, in which the Jewish community was targeted.” The agency said the Joint Terrorism Task Force is investigating.

Michael Finfer, the president of the congregation, said in a statement “there was a one in a million chance that the gunman picked our congregation.”

Meanwhile, unlike AP which ignored President Biden’s calls to renew the fight against antisemitism in the wake of the Texas synagogue attack, other news agencies highlighted the president’s remarks citing the world’s oldest hatred. Agence France Presse reported today and yesterday that “the Jewish community and Biden renewed calls to fight anti-Semitism.” AFP added:

The siege had sparked an outpouring of concern from Jewish organizations.

Biden pledged to “stand against anti-Semitism and against the rise of extremism in this country.”

But she said it was “not shocking” the crisis occurred in a Jewish community.

“Cases of anti-Semitism have risen lately, but since Jews were first walking the Earth, we have been persecuted,” she said.

United Press International, for its part, reported statements by Texas’ attorney general and by Vice President Harris tying the attack to antisemitism:

He said he told Texas Attorney General Ken Paxton to make sure word spreads to synagogues and other places of worship “that we’re not going to tolerate this, that we have this capacity to deal with” assaults and antisemitism.…

“While we will learn more about the hostage taker’s motivation, we know this: what happened yesterday at Congregation Beth Israel is a reminder that we must speak up and combat antisemitism and hate wherever it exists,” Harris said. “Everyone has a right to pray, work, study, and spend time with loved ones not as the other — but as us.”

ADL Is Out, CAIR Is In 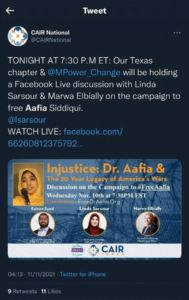 Another striking feature of AP’s coverage from the last two days is that while the news agency has not once mentioned the Anti-Defamation League, it has repeatedly given voice to the Council on American-Islamic Relations, an unindicted co-conspirator in the largest terror finance case in U.S. history. With a history of Hamas ties, and a vast record of antisemitism, CAIR has unsurprisingly campaigned in recent months on behalf of Aafia Siddiqui, the Pakistani terrorist whose release captor Malik Faisal Akram sought. Dubbed “Lady al-Qaeda,” Siddiqui was found with plans for chemical attacks on New York landmarks and called for DNA testing of all jurors in her case to ensure they weren’t Jewish.

“Zionist synagogues,” the Anti-Defamation League, Hillel and other Jewish organizations are “enemies” who are part of a conspiracy behind Islamaphobia [sic], American police brutality, and US border control, according to a speech made by the Council on American-Islamic Relations (CAIR) San Francisco executive director and former Women’s March board member Zahra Billoo.
“When we talk about islamophobia, we often think of the vehement fascists… but I also want us to pay attention to the polite Zionists, the ones that say ‘let’s just break bread together,'” said Billoo on November 27 at the American Muslims for Palestine’s (AMP) Annual Convention for Palestine in the US.

It appears that AP took Billoo’s advice to heart, granting the antisemitism-peddling CAIR the opportunity in at least five separate articles to carry out damage control  while completely shunning groups like the ADL and Secure Community Network, which counter and protect against antisemitism (“Texas rabbi: Captor grew ‘belligerent’ late in standoff,” “Texas rabbi: security training paid off in hostage standoff,” “A closer look at the case of Aafia Siddiqui, jailed in Texas,” “Hostages safe after Texas synagogue standoff; captor dead,” “Ranting man takes hostages at Texas synagogue”).
Retired federal prosecutor Henry Kopel argues in his recently released book, War on Hate: How to Stop Genocide, Fight Terrorism, and Defend Freedom, that “what is needed above all [to fight terror] going forward is a simple, empirical insistence on truth and accuracy: rather than bending facts to fit some preferred theory, determine and follow the facts wherever they lead.”
In clinging to the false narrative rejecting antisemitism as motive for attacking Jewish worshippers, and in insisting on propping up the purveyors of antisemitism while spurning the whistleblowers against antisemitism, AP not only misinforms, but also fuels a toxic environment enabling the next attack on a Jewish congregation. (Not that it would be antisemitic, of course.)

AP has deleted its original tweet highlighting DeSarno's remark alleging that "Hostage taker was not focused on the Jewish community." The news agency's tweet about the deletion follows: