In response to communication from CAMERA, UPI commendably amended the headline and article to remove the unfounded claim that the man died while in custody of the Israeli military. In addition, editors appended a note to the bottom of the article alerting readers to the changes. See below for a detailed update.

Palestinian news agency WAFA reported that an elderly Palestinian-American was found dead in a village near Ramallah after being detained by the Israeli military, and according to the Israel Defense Forces, the army detained the man, then released him alive.

It's not clear, then, how United Press International has determined that 80-year-old Omar Abdalmajeed As'ad died while in Israeli military custody, a claim not found even in the Palestinian news story, and contradicted by the Israeli military. 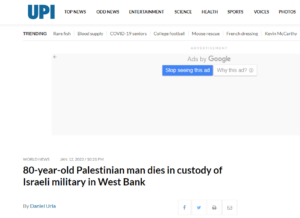 Daniel Uria's UPI article yesterday, "80-year-old Palestinian man dies in custody of Israeli military in  West Bank," begins: "An 80-year-old Palestinian man died while in custody of Israeli forces in the occupied West Bank on Wednesday."
Other media outlet report that he was detained by Israeli troops and then later his body was found in a village outside Ramallah. They do not report that As'ad died while in Israeli custody. Moreover, the very same Haaretz article which Uria cited in his story included this key information:

The Israeli military confirmed he had been held by soldiers "after resisting a security inspection," but said he was then released and only later, in the morning, found dead near his village.

Haaretz was hardly the only news outlet to report that the IDF said they released As'ad alive. Reuters likewise reported:

The Israeli military said it had carried out an overnight operation in the village, and that a Palestinian was "apprehended after resisting a check". It said he was alive when the soldiers released him. 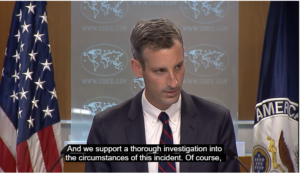 State Department spokesman Ned Price yesterday on the death of As'ad: "We support a thorough investigation into the circumstances of this incident."

"An initial inquiry by the commanders at the scene indicated that during the inspection process aPalestinianwas apprehended after resisting a check, and he was released later that night," the army said in a statement.

In addition, AP reported ("Israel probes death of elderly Palestinian who was detained"):

It’s unclear when he died. . . .
The Israeli military said in a statement Wednesday that Asaad was arrested “after resisting a check” and was released later that night, implying he was alive.

While UPI reported the Israeli military's confirmation that the army detained As'ad, the news agency inexplicably and inexcusably omitted the military's information that he was subsequently release. Thus, UPI selectively recounted:

The Israeli military confirmed As'ad had been held by soldiers after resisting a security inspection, and the Military Police Criminal Investigation Division is set to launch a formal investigation.

CAMERA earlier today contacted UPI to request either substantiation for the claim that As'ad died while in custody of Israeli forces, or, if none is available, then a clarification. Stay tuned for an update.

In response to communication from CAMERA, UPI yesterday commendably amended both the headline and the accompanying article. The headline now accurately reports: "80-year-old Palestinian man dies after being detained by Israeli military in West Bank." In addition, the amended article now begins:

An 80-year-old Palestinian man died after being detained by Israeli forces in the occupied West Bank on Wednesday.

Furthermore, editors commendably appended the following information to the bottom of the story alerting readers to the correction:

This article has been updated to correct the fact that Abdalmajeed As'ad did not die in Israeli military custody.