“Full Measure with Sharyl Attkisson is a weekly national news program focusing on investigative, original and accountability reporting unique in today’s media and is dedicated to pursuing untouchable subjects through fearless reporting,” says Sinclair. By “fearless reporting,” does Sinclair mean journalists report on topics about which they actually know very little? (Also, as serious consumers of international news well know, coverage about these Jerusalem issues is obsessive, hardly “untouchable.”)

Sinclair’s chief political correspondent flounders in the unfamiliar foreign terrain, starting with his erroneous reference to the potential “reopening of a diplomatic compound, an American consulate, located in a part of Jerusalem considered Palestinian territory.”

Thuman’s error is two-fold. First, no part of Jerusalem is, or ever has been, “Palestinian territory.” From 1948 to 1967, it was occupied by Jordan. Before that, Jerusalem was part of the British Mandate. The Nov. 29, 1947 partition plan had called for Jerusalem to be a corpus separatum, an international city administered by the UN for 10 years, at which point the city’s status was to be decided in a referendum. Before the British Mandate, the city was under Ottoman control, and so on. Going back through history, at no point was any part of the city “Palestinian territory.”

Other leading media outlets have corrected the identical or similar error. For instance, AP published the following significant correction Feb. 21, 2018, after erroneously reporting “east Jerusalem is Palestinian territory occupied by Israel since the 1967 war”:

In a story Feb. 21, The Associated Press reported that east Jerusalem is Palestinian territory occupied by Israel since 1967. The story should have made clear that this was quoting a speech by Palestinian President Mahmoud Abbas to the U.N. Security Council. The Palestinians claim east Jerusalem as the capital of a future state, a position backed by most of the international community. Israel considers the entire city, including the eastern sector, to be its undivided capital. 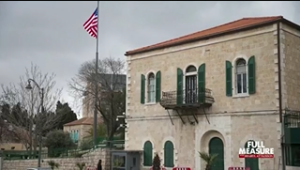 Second, contrary to the report, the American consulate is located in west Jerusalem. The Palestinian Affairs Unit of the U.S. consulate in Jerusalem was located on Agron Street, in the western part of the city, not in east Jerusalem, which is the part of the city that Palestinians claim as capital of their future state. The west Jerusalem Agron Street building appears at 2:46 minutes into the broadcast (screen capture at left), precisely when Thuman refers to the “reopening of a diplomatic compound, an American consulate, located in a part of Jerusalem considered Palestinian territory.” The broadcast again show the Agron Street building and refers to the “reopening of the U.S. diplomatic facility for Palestinians in Jerusalem” at 4:09 minutes.

Both Reuters and Haaretz have previously corrected after mislocating the U.S. consulate in east Jerusalem.

Thuman’s misinformation was not limited to supposed Palestinian sovereignty in Jerusalem or the location of the Agron Street building. Thuman also grossly misled about President Trump’s declaration that Jerusalem is Israel’s capital, stating: “At the time no other country in the world had made such a declaration.” Thuman also misreported that Trump’s declaration was a reversal of decades of US policy. In fact, The Jerusalem Embassy Act of 1995 clearly and explicitly states:

The Congress makes the following findings: (1) Each sovereign nation, under international law and custom, may designate its own capital. (2) Since 1950, the city of Jerusalem has been the capital of the State of Israel.

Moreover, multiple other countries have previously located their embassies in Jerusalem.

Finally, in a startling indication that Thuman was clearly outside his depth, he employed extremely problematic and highly objectionable language referring to Palestinian “sovereignty blocked by an American and Jewish alliance.” What, precisely, did Thuman mean by an “American and Jewish alliance”? Did he mean American and Israeli? If so, that’s what he should have said because a) Jews also live in America in addition to numerous other countries all around the world. Are these dispersed Jews in their respective countries allegedly responsible for blocking Palestinian sovereignty? And b) The American government is largely Christian and its policy is mostly determined by the overwhelmingly Christian voting public which backs Israel. If Thuman cites “Jewish” as shorthand for Israel, shouldn’t he be consistent and cite “Christian” as shorthand for American? Obviously, the answer to the rhetorical question is “no,” and merely underscores that Thuman should have said “American and Israel alliance.”

Sinclair TV Group stations is affiliated with various national networks in cities across the country and owns 112 local television stations. According to Newsweek, an Emory University paper maintained that stations bought by Sinclair have decreased their local coverage in favor of national affairs.

With research by Myron Kaplan.