“Equally reflexive, CAIR tars as an Islamophobe anyone who questions the organization,” observed then Columbus Dispatch editorial page editor Glenn Sheller back in 2004 (“Muslim Group’s Conflict with Discrimination is Uphill Fight”).

In the interim 15 years, Sheller has moved on and his former paper has adopted the longstanding CAIR (Council of American Islamic Relations) tradition of tarring the organization’s critics as anti-Muslim.

Thus, in coverage this week of the Ohio chapter’s firing of its executive director for allegedly leaking confidential information to the Investigative Project on Terrorism, The Columbus Dispatch repeatedly states as fact that the research organization is “anti-Muslim.”

(Full disclosure: CAIR has also baselessly smeared CAMERA as anti-Muslim in a report in which it named 39 non-profits, the Investigative Project among them, as part of an alleged “Islamophobia network.” Report co-author Zainab Arain, a research and advocacy manager at CAIR, “has a long history of praising Islamist movements such as the Muslim Brotherhood and promoting anti-Semitic conspiracy theories, such as the modern variation of the long-debunked blood libel that claims Israel kills Palestinians to steal their organs,” according to The Daily Wire. Could there be a less disqualified judge of bigotry?)

In their Dec. 14 article, “Romin Iqbal, of CAIR-Ohio, fired for allegedly leaking information to anti-Muslim group,” reporters Danae King and Yilun Cheng describe the Investigative Project on Terrorism as “anti-Muslim” three times in their article, not counting the headline itself. 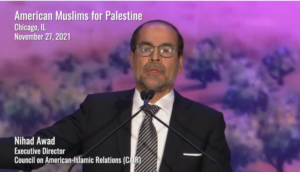 The Investigative Project is a longtime critic of CAIR, prompting ire from the Islamist organization. In recent days, for instance, Steven Emerson’s Investigative Project reported that CAIR executive director Nihad Awad called Tel Aviv “occupied,” denoting that Israel has no right to exist in any borders; recounted that CAIR San Francisco chapter head Zahra Billoo said of Israel: “And I am clear about I am not going to legitimize a country that I don’t believe has a right to exist”; and detailed CAIR’s long history of antisemitism.

Those who advocate for a two-state solution – one that leaves Israel intact – “are your enemies,” she said moments later. “There are organizations and infrastructures out there who are working to harm you. Make no mistake of it. They would sell you down the line if they could. And they very often do behind your back. I mean, the Zionist organizations, I mean the foreign policy organizations who say, they’re not Zionists, but want a two-state solution.”

What’s remarkable, though, is the Dispatch‘s uncritical application of the bigotry characterization to the Investigative Project. The paper’s wholehearted adoption of the smear, and its probing insinuations about the project’s funding and associations, are particularly striking in light of the reporters’ kids-gloves treatment of CAIR.

The Dispatch‘s article “What is CAIR-Ohio and What Does It Do in Columbus?” by Monroe Trombly is representative of the paper’s deferential treatment of the Islamist organization:

On its website, CAIR-Ohio, which has an office in Hilliard, says its mission is to enhance understanding of Islam, encourage dialogue, protect civil liberties, empower American Muslims, and build coalitions that promote justice and mutual understanding.

CAIR-Ohio specializes in immigrants’ rights issues and seeks to empower non-citizens by helping them achieve independence, security and the opportunity to fully participate in American society, according to its website.

The article dedicates three more paragraphs to CAIR’s self-declared work supporting refugees, fighting discrimination and combatting alleged anti-Muslim media bias. (Regarding the latter activity, CAIR provided a scholarship for student journalist Raja Abdulrahim who, in her University of Florida campus paper, wrote that a fellow student “erroneously refers to Hamas and Hizbollah as ‘fundamentalist’ and ‘terror organizations’ that have ‘murdered innocent Israeli civilians.’” Abdulrahim later went on to report for The Los Angeles Times and is now a reporter at The New York Times.)

In the mold of CAIR-protégé Abdulrahim, The Columbus Dispatch entirely conceals that CAIR is an unindicted co-conspirator in the 2009 Holy Land Foundation (HLF) retrial, the largest terrorism financing case in U.S. history.

“CAIR was named as an unindicted co-conspirator of the Holy Land Foundation for Relief and Development in United States v. Holy Land Foundation et al…. During that trial, evidence was introduced that demonstrated a relationship among CAIR, individual CAIR founders (including its current President Emeritus and Executive Director) and the Palestine Committee. Evidence was also introduced that demonstrated a relationship between the Palestine Committee and Hamas, which was designated as a terrorist organization in 1995. In light of that evidence, the FBI suspended all contacts between CAIR and the FBI.”

The FBI’s decision to suspend formal contacts was not “intended to reflect a wholesale judgment of the organization and its entire membership. Nevertheless,” the Bureauordered that until it “can resolve whether there continues to be a connection between CAIR or its executives and Hamas, the FBI does not view CAIR as an appropriate liaison partner.” As a result, the FBI restricted its field offices’ “non-investigative interactions with CAIR,” according to a Sept. 2013 U.S. Department of Justice Inspector Generalreportissued under the Obama administration.

Ghassan Elashi, co-founder of CAIR’s Texas chapter. Elashi was one of five men sentenced to prison in the Holy Land Foundation case for raising more than $12 million for Hamas.While well-meaning individuals may be active in CAIR at local or state levels, the council has also had no fewer thanfiveformer lay leaders or staffers who have been arrested, convicted and/or deported for terrorism related charges. Among them:

Randall Royer, a CAIR employee tasked with outreach and communications, whopled guilty to weapons and explosives charges in 2004. In later grand jury testimony, Royer admitted that his terror cell’s primary goal was to fight with the Taliban against U.S. forces in Afghanistan.

CAIR’s former community relations director, Bassem Khafagi, who was sentenced in September 2003 in the U.S. to 10 months in prison and later deported to Egypt, after pleading guilty to two counts of bank fraud and one count of visa fraud. He had been charged with funneling money to promote terrorist activities.

Rabih Haddad, a fundraiser for CAIR’s Ann Arbor chapter, who was deported to Lebanon after an immigration judge, found that he presented “a substantial risk to the national security of the United States.” The U.S. Treasury Department said Haddad had been a member of Makhtab Al-Khidamat, the precursor organization to Al Qaeda.

In 2004, CAIR-Northern Virginia director Abdurahman Alamoudi pleaded guilty to terrorism-related financial and conspiracy charges—resulting in a 23-year federal prison sentence. Among other actions, the U.S. DOJ noted that Alamoudi had helped “in recruiting participants” for a plot to assassinate the then-Saudi Crown Prince.

In 2016, the U.S. Court of Appeals in D.C. ruled that CAIR should be tried for fraud. The case involves hundreds of people who had relied on CAIR for legal aid.

Regarding Nihad Awad, Durns elsewhere recounted that the CAIR founder and executive director in 1994

declared himself to be a Hamas supporter at a forum at Florida’s Barry University. In 1999, at the Islamic Association for Palestine’s Chicago convention (IAP is the Hamas-related precursor of CAIR), Awad praised suicide bombers who “kill themselves for Islam.”

The Dispatch repeatedly quotes Awad, but is silent about his proclivity for a designated terror organization and his praise for murderers, sentiments which surely would tarnish the paper’s carefully cultivated picture of CAIR as the model civil rights organization.