In response to further communication from CAMERA, Yahoo! News has removed the irrelevant images from a Palestinian funeral from three years ago. See below for a detailed update.

Multiple media outlets on Friday published a 2019 photograph of a Palestinian funeral to illustrate coverage of the burial of Israeli terror victim Yehuda Dimentman, murdered by Palestinian gunmen in a fatal shooting attack Thursday night. 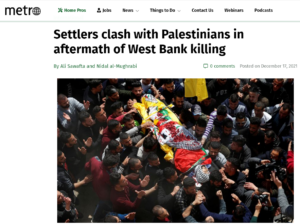 Screenshot from Metro, before the graphic was fixed

The mismatch between the image and the story likely originated with Reuters, which provided both the article covering Dimentman's funeral and the irrelevant three-year-old photos of a Palestinian funeral killed in entirely unrelated circumstances. 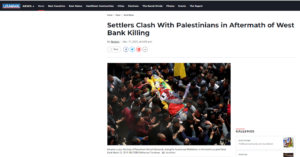 Screenshot of US News before the irrelevant image was replaced

CAMERA yesterday prompted U.S. News and World Report and Metro to commendably and promptly replace the irrelevant image with a photograph of a mourner at Dimentman's funeral. (The new image, at bottom, of the religious male mourner, appears now in both U.S. News and Metro.)

As of this writing, Yahoo! News and Euronews have so far failed to act on CAMERA's requests to replace the unrelated photograph of a Palestinian funeral with an image from Dimentman's burial. 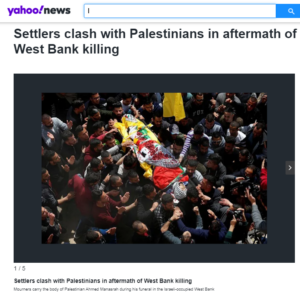 Settlers clash with Palestinians in aftermath of West Bank killing 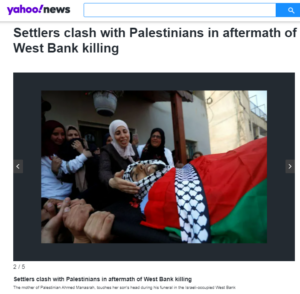 The same "Settlers clash with Palestinians in aftermath of West Bank killing" caption also appears in the rest of the slideshow images, including one of the Palestinian fatality and his mother.

But the scenes in question have absolutely zero connection to any clashes between settlers and Palestinians, either last week or dating back to 2019. Contrary to the caption's erroneous suggestion, the Palestinian fatality is not the result of clashes with settlers.

The Palestinian pictured in the photograph is Ahmed Manasrah, shot dead in March 2019 by an Israeli soldier who mistakenly thought he was throwing stones.

The Reuters article covering Dimentman's funeral noted alleged settler violence against Palestinians, including Palestinian reports about attacks during the burial. But Manasrah was not killed by Israeli settlers, so the circumstances, along with the timing of the event, are completely irrelevant to Reuters' story Friday. 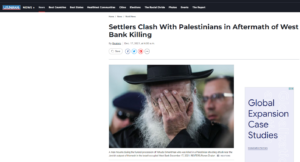 US News' updated coverage, with an Israeli mourner at Dimentman's funeral. The same image now appears on the Metro's page 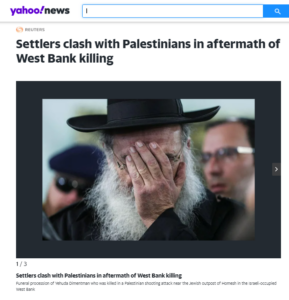 Following additional communication from CAMERA, Yahoo! News editors today commendably deleted the two irrelevant images of a Palestinian funeral from three years ago. All of the slideshow images, including the first one, now depict mourners at Yehuda Dimentman's funeral. Screenshot of the amended page is at left.