A lot can be concealed — or revealed — by a footnote. It all depends on whether the reader bothers to check it.

UN human rights experts* have expressed alarm at the rising rate of violence directed by Israeli settlers towards Palestinians in the occupied Palestinian territory.

“Settler violence has always been an extremely disturbing feature of the Israeli occupation,” said the experts. “But in 2021, we are witnessing the highest recorded levels of violence in recent years and more severe incidents.

The asterisk next to the words “UN human right experts” refers those who bother with it to the following qualification at the bottom of the press release:

Michael Lynk,Special Rapporteur on the situation of human rights in the Palestinian Territory occupied since 1967.Jelena Aparac (Chair-Rapporteur), Ravindran Daniel, Chris Kwaja, Sorcha MacLeod, Working Group on the use of mercenaries.
The Special Rapporteurs are part of what is known as the Special Procedures of the Human Rights Council. Special Procedures, the largest body of independent experts in the UN Human Rights system, is the general name of the Council’s independent fact-finding and monitoring mechanisms that address either specific country situations or thematic issues in all parts of the world. Special Procedures experts work on a voluntary basis; they are not UN staff and do not receive a salary for their work. They are independent from any government or organization and serve in their individual capacity.

In other words, despite a headline shouting that “UN experts” are “alarmed by rising settler violence,” a very careful read indicates that the UN distances itself, albeit practically under the radar, from the so-called experts, noting they are “independent” from the organization. Thus, the press release trumpets the “experts” as the UN’s own even as it very inconspicuously downplays the authors’ association with the organization.

Though the footnote maintains that special rapporteurs are independent of any organization, Lynk has a long history of anti-Israel activity. In 2016, United Nations Watch detailed that Lynk

plays a leadership role in numerous Arab lobby groups, including CEPAL, which promotes “Annual Israeli Apartheid Week” events; signs anti-Israel petitions; calls to prosecute Israel for alleged war crimes; addresses “One State” conferences that seek to eliminate Israel; and argues that “the solution” to “the problem” must go back to Israel’s very creation in 1948, which he calls “the start of ethnic cleansing.”

So much for the “UN experts” touted in the headline.

But that’s not the only deception about alleged rising settler violence achieved by the UN’s burying of key information. Without providing any additional details about the shocking incidents or their circumstances, the same UN press release makes the alarming statement: “Four Palestinians were killed by settlers this year.”

The press release appears to attribute that figure to United Nations Office for the Coordination of Humanitarian Affairs (OCHA). Those determined to hunt down the facts about the four reported fatalities arrive at OCHA’s “Data on casualties.”

OCHA’s secretive database, password protected for those who won’t question their data?

For whatever reason, however, OCHA conceals its data from the public, releasing it only to pre-approved representatives of “humanitarian agencies.” A request from this researcher to OCHA to receive access to the full data went unanswered.

What exactly is OCHA hiding? Releasing details about the four fatalities – their names, dates and locations – would enable independent researchers and journalists to cross-check and verify or discount the information.

Significantly, the tenth paragraph of “Definitions and clarifications,” appearing under the selectively revealed data from the database, states: 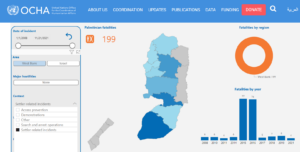 In other words, omitted in the alarmist press release about alleged rising settler violence is the fact that the supposed victims who paid the ultimate price of settler attacks — “four Palestinians were killed by settlers this year” — were possibly assailants, and not the victims depicted by the United Nations.

Indeed, the data that is accessible allows users to select “Settler-related incidents” under “context,” revealing four Palestinians killed. Thus, while OCHA concedes that four Palestinians were killed in incidents involving settlers, including incidents in which Palestinians attacked settlers and were subsequently killed, the UN press release counts these assailants as casualties of allegedly rising settler violence.

It gets worse. Journalists, apparently relying on the press release — (after all, press releases are for the benefit of journalists) — parroted the deceptive figure without undertaking any independent fact-checking.

The Guardian‘s Bethan McKernan and Quique Kierszenbaum, in particular, got carried away, charging: “The UN recorded 410 attacks by settlers against Palestinian civilians and property in the West Bank in the first 10 months of 2021, including four murders, up from 358 in 2020, and 335 in 2019.”

Following CAMERA’s communication with CNN pointing out that OCHA itself acknowledges that its figures include Palestinians killed as they carried out attacks, editors slightly amended the text to state:

According to the UN organization’s database of incidents, at least three Palestinians were shot dead by settlers in 2021.

In addition, a note appended to the bottom of the article now states:

The original article has been updated with new information about violent attacks in the West Bank.

While CNN’s new language is technically correct, it remains grossly misleading as it still fails to note that even according to OCHA, the data includes cases in which settlers killed Palestinian assailants in self-defense, as opposed to Israeli-initiated violence.

CNN’s reference to “at least three” indicates that the media outlet received access to the blocked data and that it is not confident that the fourth was killed by settlers, even in a situation of self-defense on the Israeli’s part.

Without access to OCHA’s details about the alleged victims — who are perhaps assailants, a look at the detailed data of B’Tselem, an anti-settler organization which provides detailed data on both Israeli and Palestinian casualties, is instructive.

B’Tselem’s database, updated through Nov. 30, 2021 — in other words, it covers a longer period of time than the Nov. 10 UN press release — enables researchers to view detailed information of Palestinians killed by Israeli civilians in the West Bank. Significantly, in this time period, B’Tselem lists two — not four —Palestinians killed by Israeli civilians.

33 years old resident of Ras Karkar, Ramallah and al-Bira District, killed on February 5, 2021, in Sde Ephraim farm, Ramallah and al-Bira District, live ammunition. Additional information: הערה ישנה, עדכון אחרי הגעת דוח רפואי: Fatally shot in the head and back by a settler and a settlement outpost security guard in circumstances unknown to B’Tselem. According to the military, he was unarmed. Israel held his body until 26 March 2021, when it was returned to his family.

25 years old resident of Beit Ummar, Hebron District, killed on January 5, 2021, in Gush Etzion, Bethlehem District, live ammunition. Additional information: Wounded by a settlement security coordinator’s gunfire at Gush Etzion junction after, according to the military, he had thrown a knife during suspect apprehension procedure. Succumbed to his wounds shortly afterwards. Israel is holding his body.

Thus, B’Tselem’s data points to two Palestinian assailants killed in 2021 – one was trying to break into a settler’s home, the other had attempted to stab the settlement security coordinator – not four victims of settler violence.