In response to communication from CAMERA’s Israel office, Haaretz‘s English edition commendably amended a report which had stated as fact an unverified claim by Church leaders alleging rising Israeli violence against clergy. 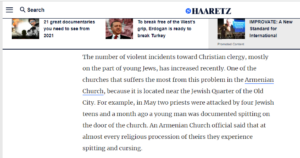 The number of violent incidents toward Christian clergy, mostly on the part of young Jews, has increased recently. [Screenshot of the original text at left.]

This unsubstantiated, vague assertion fails to even specify which time periods are in question or what the alleged figures are.
In contrast, the Hebrew version of the article rightly attributed the unverified claim to the clergymen engaged in the anti-Israel campaign. Referring to the Church leaders behind the campaign, the Hebrew article stated (CAMERA’s translation): “They say the number of violent incidents against clergyman, mostly carried out by Jewish youth, has recently increased.” 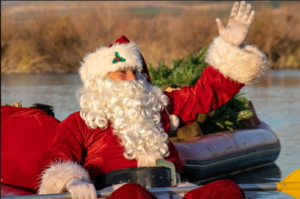 Editors at Haaretz‘s English edition agreed that attribution for the unverified claim was required, and promptly amended the report, which now states: “They say the number of violent incidents toward Christian clergy, mostly on the part of young Jews, has increased recently.”
More broadly, Hasson’s article essentially gives an uncritical platform to the anti-Israel campaign by heads of various Christian denominations in Jerusalem charging a “systematic” Israeli campaign to drive Christians out of Jerusalem and other parts of the Holy Land.
Hasson dedicates just two of the total 18 paragraphs to critics of the anti-Israel campaign, noting the Israel’s Foreign Ministry response that the accusations are “baseless and distort the reality of the Christian community in Israel.” Hasson cites neither details nor data to substantiate the Foreign Ministry’s position. (More on that below.)
In addition, the lengthy article notes that the campaign “drew attention from a number of newspapers around the world, including the British Telegraph, Sunday Times and Times,” but ignores that British politicians, along with the British Jewish community, strongly condemned allegations. (See Jewish Chronicle, “Fury With Archbishop over ‘blinkered’ remarks on Christians in Holy Land.”)

The President of the @BoardofDeputies has responded to an article by the Archbishop of Canterbury in today’s Sunday Times – https://t.co/mNfJNikSpm pic.twitter.com/5AWCPDW1GM

— Board of Deputies of British Jews (@BoardofDeputies) December 19, 2021

Marie van der Zyl, president of the Board of Deputies of British Jews, wrote to Archbishop of Canterbury Justin Welby about his Times piece:

I was especially troubled by your description of “the first Christmas”, which allows for the possibility of comparison to current events. In particular, I noted your reference to “the backdrop of a genocide of infants”, a clear reference to the narrative of the “Massacre of the Innocents”, as recounted in the Gospel of Matthew. I found this reference troubling because of the potential linkage which could be made between Christianity, Jews and the killing of children in any current context.

This is particularly distressing because I know that you have advocated for policies that support Jewish communal concerns. I fear that rather than encouraging reasoned dialogue on the issues you raise, this may in fact divide communities.

Indeed, Welby himself admitted deep into his column (“Let us pray for the Christians being driven from the Holy Land”), “In Israel, the overall number of Christians has risen.” As CAMERA Christian media analyst Dexter Van Zile noted, “there are more Christians living in Israel today than there were in the 1940s, prior to the War for Independence.”

In a press release published yesterday to mark Christmas, Israel’s Central Bureau of Statistics (CBS) noted that the country’s 182,000-strong Christian population increased by 1.4 percent in 2020.

These data points are extremely relevant to any news coverage about campaigns alleging that Israel is driving out Christians. The official figures revealing the population’s growth unmask the counterfactual nature of the “Christians being driven out by Israel” demonization campaign. Haaretz, however, failed to mention the most salient fact that Israel’s Christian population is growing, not diminishing.

The CBS press release also contains an interesting figure which belies the baseless, alarmist claim by Greek Orthodox Patriarch of Jerusalem, Theopilos III, who initiated the campaign. He alleged: “at no time in human history has the future of the Christian communities been shakier.”

Israel’s Christians, apparently, did not receive the Patriarch’s memo about their unprecedented, dire situation and their imperiled future. The CBS found: “84% of Christians are satisfied with their life: 24% answered ‘very satisfied’ and 60% were ‘satisfied’.”