AP’s “Today in History” item egregiously whitewashes as “guerrillas” the Abu Nidal terrorists who in 1985 carried out simultaneous deadly attacks against crowds of passengers at the El Al counters in the Rome and Vienna airports. In today’s history feature, AP sanitizes the perpetrators of the mass-casualty terror attack:

In 1985, Palestinian guerrillas opened fire inside the Rome and Vienna airports; 19 victims were killed, plus four attackers who were slain by police and security personnel. (Emphasis added.) 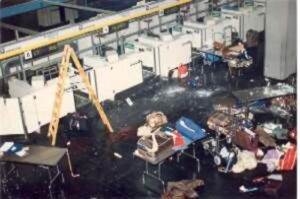 The Abu Nidal gunmen who attacked crowds of passengers are terrorists, not “guerrillas.” They targeted civilians for political purposes. As Israel’s Shin Bet detailed at the time:

At 09:10 a.m. on Dec. 27, 1985 four terrorists attacked El-Al’s ticket counters at Leonardo da Vinci-Fiumicino Airport in Rome. The terrorists opened machine gun fire from three directions and threw hand grenades at El-Al passengers from the bar opposite the airline’s counters. Approximately 60 people were in the area of the bar at the time. The counters opened half an hour before and were crowded with passengers. Dozens of passengers also filled the adjacent Trans World Airlines (TWA) counters, which handled two other flights.

13 people were killed in the attack, and 76 were injured. Three of the perpetrators were killed by Israeli security staff, who returned fire towards the sources of the shooting. One terrorist was captured wounded. The incident took place over 15-20 seconds overall.

On the same day, Dec. 27, 1985, El-Al’s ticket counters at Vienna International Airport were also attacked by terrorists. Three passengers (two Austrians and one Israeli) were killed, and 44 were injured in this attack.

133 outbound passengers were registered to the El-Al flight from Vienna to Tel Aviv. At the time of the attack, 09:10 a.m., approximately 60 El-Al passengers were in the terminal. Three terrorists ascended a staircase, threw four or five hand grenades from above into the terminal, and then shot bursts of gunfire.

In contrast to today’s sanitizing of the Palestinian terrorists from the 1985 Rome and Vienna airport attacks, just a few years ago AP competently reported on the 2016 deadly attack at Istanbul’s airport, where passengers were similarly slaughtered: “The deadly terror attack at Turkey’s largest airport has posed an all-too-familiar question to security officials . .  “

Similarly, about a 1983 bombing in the Paris airport, AP had accurately reported: “In 1983, Armenian terrorists set off a bomb at the Turkish Airlines check-in counter at Paris’ Orly Airport, killing seven people and wounding 55″ (“Brussels shows vulnerability of airports to terror attacks”). (Emphases added.)
Here’s how AP referred to Abu Nidal in a 2003 story: “mastermind of some of the 20th century’s worst terror attacks – against Westerners, Jews and fellow Palestinians” and “one of the world’s most wanted men before he was supplanted by Osama bin Laden as a synonym for terrorism” (reported in “Terrorist mastermind Abu Nidal lived quietly in Baghdad under assumed name,” Donna Abu-Nasr, July 3, 2003).
The New York Times’ Dec. 28, 1985 headline about the terror attacks in Rome and Vienna accurately referred to the perpetrators: “Airport terrorists kill 13 and wound 113 at Israeli counters in Rome and Vienna.”
CAMERA is in communication with AP about the gross mischaracterization. It appears that a correction is forthcoming. Stay tuned for an update.
Donate Now