A new report from NGO Monitor issues a much-needed challenge and rigorous critique of one of today’s most dangerous libels against the Jewish State: the claim that Israel is an “apartheid” state. The authors, Joshua Kern of 9 Bedford Row and Anne Herzberg of NGO Monitor, expertly demonstrate the real academic and legal analysis absent from those accusations lobbed against Israel.

The report is divided into three parts. First, it reviews what apartheid actually looked like in South Africa. Second, it details the history of the apartheid accusation against Israel. Third, it actually analyzes the international law surrounding the crime of apartheid. In early 2022, a companion report will be issued that will apply the law to the situation in Israel, putting the facts to the legal test.

Each of these parts serves a crucial purpose.

Groups like Human Rights Watch (HRW) try to argue we shouldn’t look to the South African experience as illustrative of what the crime of apartheid involves, since such a comparison would inevitably expose the superficial nature of HRW’s libel against Israel. Kern and Herzberg correctly point out in Part I that not only is the South African experience practically relevant, but also legally relevant, considering the Apartheid Convention expressly refers to it.

Similarly, in Part III, the authors do what Israel’s defamers refuse to do: provide an “objective or measurable standard for what practices amount to apartheid.” As articulated by another legal expert, Professor Eugene Kontorovich of George Mason University’s Antonin Scalia Law School, when it comes to HRW’s “apartheid” libel, “there is no baseline for its accusations.” In other words, what groups like HRW and B’tselem do is distort the facts on the ground and then shape the law to fit those distorted facts. Herzberg and Kern instead perform legal analysis as it is meant to be done. They analyze and determine the scope and meaning of the law based on actual legal principles and only then apply the law to the facts.

This understanding is what really colors Part II’s thorough analysis of how the accusation of “apartheid” against Israel began and has evolved over the decades, as well as how CAMERA’s work as a media watchdog comes into play. 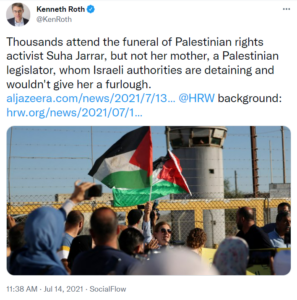 A screenshot of a tweet by Ken Roth, the Human Rights Watch Executive Director, labeling a senior member of the terrorist organization, Popular Front for the Liberation of Palestine (PFLP), as simply a “legislator.”

HRW’s “A Threshold Crossed” report was treated with a degree of deference it entirely did not deserve by the media. CNN, for example, gave Ken Roth, HRW’s Executive Director, a full ten minutes to spread the libel without challenge. This in and of itself is problematic. Roth and HRW have a long history of belittling Judaism and victim-blaming Jews, butchering basic concepts of international law to libel Israel, and whitewashing and even giving jobs to members of Palestinian terrorist organizations.

On matters of international law, HRW itself is well known for inventing standards it applies to Israel and no other country. Take, for example, HRW’s former MENA Executive Director Sarah Leah Whitson, who was an ardent supporter of the BDS movement against Israel while simultaneously actively supporting an Armenian organization that lobbied Congress to support Armenian settlements in Nagorno-Karabakh.

Responsible journalism would, of course, allow for Roth to present his case. But it would also require bringing on someone with a dissenting view, or better yet, an actual legal expert to point out the inconsistencies and errors in HRW’s analysis.

But this is where the media has failed most spectacularly on the “apartheid” slander against Israel. They have replaced actual investigative work – including providing news consumers with true expert analysis to understand the complexities of the news – with simply amplifying accusations that fuel outrage.

In this case, that’s particularly dangerous. The history of antisemitism is filled with blood libels designed to associate Jews with the contemporary idea of evil. The libel that Jews murdered gentile children spread from town to town in medieval days, resulting in the slaughter of Jews. Similarly, the accusation of Jews poisoning wells or causing epidemic diseases resulted in hundreds of Jewish communities being wiped out.

Nowadays, as Kern and Herzberg elaborate with exceptional clarity, there is a decades-old effort to associate Jews with the modern idea of evil: racism. Make no mistake. This effort is part of a deliberate effort to do what Arab armies repeatedly could not: destroy the Jewish State.

Thus, it’s not just that news consumers are left without the knowledge of Roth and HRW’s biases, the many factual errors, and the skewed legal analysis. It’s that media outlets like CNN, at best, are serving as the latest dupes in spreading another iteration of the antisemitic “Zionism as a form of racism” libel. As the NGO Monitor report recounts, the “apartheid” slander has evolved as part and parcel of the “Zionism is racism” slander. It has at times evolved into labeling Jews as fascists in the UN, or even copying the strategy of the antisemitic authors of the Protocols of the Elders of Zion by accusing Zionists of seeking “hegemonism” (i.e., world domination).

Over the last 70+ years, those who would have destroyed the Jewish State in its infancy and left the Jewish people stateless – subject to dhimmi status or the whims of a continent that had just murdered six million of them – have used these types of allegations as a second front. As Faruq al-Qadumi, a senior PLO official, put it in 1974, they “regard [such] diplomatic activities as a part of our activities on the battlefield.” Or, as Palestinian Authority leader Mahmoud Abbas more recently put it, it’s all about the “the internationalization of the conflict.”

With the complicity of an irresponsible media environment, it’s working, too. Amidst a continued surge of antisemitism, the Anti-Defamation League recently reported:

One of the most common strategies of anti-Israel activists in 2020-2021 was to promote the view that any expression of a connection with or support for Israel is racist, thereby implicitly painting many Jewish students as being complicit in the alleged misdeeds of the Israeli government.

These are the consequences of the internationalization of the libel, fueled by media bias and malpractice. Not only is Israel being falsely labeled as an “apartheid” state, but Jews in the diaspora are now being labeled as racist.

Thankfully, there are outstanding expert voices out there still working to correct the record. Everyone should read and internalize Herzberg and Kern’s report and demand more reasoned, objective, and accurate conversations on these issues.