A decade ago, veteran Palestinian negotiator Nabil Shaath candidly expressed his government’s stark opposition to the envisioned two-state solution in which Israel would remain the nation state of the Jewish people with an Arab minority, and the future Palestine would be the national home of the Palestinian people, absorbing Palestinian refugees and their descendants from around the world (Arabic News Broadcast TV, July 13, 2011, translated by MEMRI).

Shaath’s statement was not a slip-up in which he inadvertently revealed his own personal views. It faithfully reflected both the zeitgeist and behavior of his government. As CAMERA’s Ricki Hollander previously wrote:

In his 2004 book The Missing Peace: The Inside Story of the Fight for Middle East Peace, former U.S. Middle East envoy Dennis Ross provided a post-mortem of the failed peace negotiations he mediated in 2000 during President Bill Clinton’s administration. He lamented that then-Palestinian leader and PLO chief Yasir Arafat was unwilling to “give up Palestinian myths,” “compromise or concede” or “generate a fundamental transformation” among his people to prepare them for peace with the Jewish state.

Instead, the Palestinian leader continued to assure his people that accords with Israel were just a first step in a “phased strategy” to replace the Jewish state with a Palestinian one, while presenting a peaceful face to a Western audience. This “phased” strategy is spelled out in the Palestine National Council’s 1974 ten point program, known as the “Phased Plan” for Israel’s destruction, which would first create a Palestinian state on any territory handed over by Israel (Article 2) and then use that state to “complete the liberation of all Palestinian territory.” (Article 8). 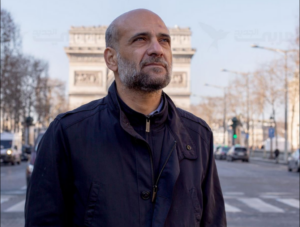 In Joseph Krauss’ fictitious narrative, Ramy represents a new, young generation which has pioneered the novel rejection of the two-state solution, bucking the old leadership’s supposed embrace of that discredited paradigm which failed thanks to U.S. and Israeli (but not Palestinian!) obstructionism.

Thus, Krauss posits that Ramy’s “rights based activism” opposing “Arab dictatorships and Israeli rule over the Palestinians” is “a major departure from the approach of the Palestinian leadership, which includes his father, Nabil Shaath, an 83-year-old veteran peace negotiator.”

The Palestinian-Egyptian BDS activist, writes Krauss, is “part of a new generation of activists, forged by the harsh repression of the 2011 uprisings and the failure of the Mideast peace process, and more focused on human rights than on the ideological and territorial disputes of their parents’ generation.”

Krauss further develops his thesis that BDS supposedly innovated rejection of the two-state solution, throwing off the stymied Palestinian diplomacy of yore:

The Boycott, Divestment and Sanctions movement, which enjoys near-unanimous support among Palestinian civil society groups, holds that any solution has to be based on granting Palestinians equal rights — in one state or two — rather than bargaining over territory.

The Palestinian leadership, which is still dominated by the elder Shaath’s generation, seeks a state alongside Israel in east Jerusalem, the West Bank and Gaza, territories Israel captured in the 1967 war.

Around 60% of Palestinians are younger than 30, with little memory of the peace process launched by the 1993 Oslo accords. The negotiations repeatedly stumbled before grounding to a halt over a decade ago.

AP’s Krauss is apparently counting on his readers’ own poor memory of the peace process, trusting that they won’t remember or won’t know that “negotiations repeatedly stumbled” — as he put it — because Shaath senior and his colleagues repeatedly rejected offers for Palestinian statehood.

By concealing that it was the Palestinian leadership which time and again walked away from the negotiating table, Krauss lends credibility to Ramy Shaath’s placement of blame on Israel and the Americans: “Ramy Shaath participated in the early rounds of talks but gave up on the process and returned to Egypt in 1998, convinced that Israel and the U.S. were not serious and that the Palestinian leadership had no backup plan.”

The notion that the anti-Israel BDS movement is a reaction to the failed but valiant efforts of Palestinian peacemakers to make headway vis-à-vis the obstructionist Israelis and Americans conforms with the “contextualized truth” doctrine of coverage on Israel and the Palestinians. According to that paradigm, Palestinians are the eternal, blameless victims of Israeli. They lack any agency or responsibility whatsoever for their predicaments.

Similarly, Krauss’s comical characterization of BDS “enjoy[ing] near-unanimous support among Palestinian civil society groups” is another symptom of cartoonish “contextualized truth” journalism. Under this distorting prism, Krauss ignores that the precious few — to be precise, we can verify the existence of one: Wasatia — Palestinian civil society organizations in favor or normalization work under very hostile conditions and are subject to violent intimidation on the part of BDS activists. As one Palestinian activist in favor of normalization (from the aforementioned Wasatia) observed:

The anti-normalization campaign in Palestine adopts violent tactics to silence moderate voices. Through threats and violence, anti-normalization activists make it harder for organizations and individuals who are working on peace building projects. … These intimidation tactics aim to shut down interpersonal reconciliation, weakening Palestinian civil society and NGOs.

A journalist free of the constraints of “contextualized truth” reporting might have explored how Ramy’s pro-BDS “human rights” activity is compatible with violent intimidation of civil society groups.

In March 2021, Abbas issued Law-by-Decree No. 7/2021, all but erasing the line between government and civil society. The decree requires that NGO work “conform” with government plans. NGOs are now required to submit their work plans and estimated budgets for PA approval at the start of every year, and PA officials will be able to halt plans before they are begun.

One Palestinian NGO called this “a merger of civil society within the government” that “directly infringes upon the independence of associations.” Another observed that “CSOs will be dealt with as if they were government administrations, reporting to and operating under the orders of the competent ministry.”

Yet instead of speaking out against the government’s assault on civil society, “human rights” activists Ramy Shaath’s favored cause is an ally in that assault on NGOs opposed to government policies.

According to Krauss, BDS advocates who oppose Israel’s ongoing existence are “focused on human rights.” Ramy Shaath’s activity regarding internal Egyptian politics also gets the “human rights” makeover.  “In Egypt, it means campaigning for basic freedoms and the release of tens of thousands of political prisoners,” explains Krauss. He writes that the younger Shaath “took part in the 2011 pro-democracy uprising in Egypt” and recounts that the activist “was never told why exactly Egyptian authorities confined him to a packed and filthy cell for over two and a half years.”

He was arrested in 2019 together with several Egyptian activists and businessmen on suspicion of assisting a terrorist group, the outlawed Muslim Brotherhood, in the case known as Al-Amal (Hope) Cell.

He also faced charges of disseminating false news about political and economic conditions in Egypt.

Ramy Shaath was arrested in July 2019 at his home in Cairo and accused of having links to the Muslim Brotherhood, which the Egyptian government designated as a terrorist organization in 2013.

Strikingly, the word “terror,” or any derivative of it, does not appear in Krauss’ story. Nor does the journalist mention the Muslim Brotherhood. Instead, the article suggests that the Egyptian authorities arrested Ramy because of his opposition to President Trump’s “Peace to Prosperity” plan or possibly due to his BDS activity:

“My very vocal opposition to Donald Trump’s ‘deal of the century’ in Palestine, I think, was the detrimental factor in the Egyptian authorities’ decision to arrest me,” he said.

Egypt accused him of being a member of an outlawed group, without saying which one, and he was never formally charged. Egyptian officials have declined to comment on his case.

Tahani Mustafa, an analyst with the Crisis Group, an international think tank, says the BDS movement’s calls for freedom and equality transcend the Palestinian context and threaten Arab rulers.

“These are very threatening concepts for these sorts of regimes, where subjects like human rights are severely repressed,” she said.

By failing to report Egypt’s accusation of Shaath’s involvement with the Muslim Brotherhood, AP burnishes Shaath’s image of a human rights campaigner who “sees wider struggle for rights.”

In conclusion, the younger Palestinian generation’s embrace of BDS carries on the previous generation’s rejection of the two-state solution, a steadfast position which has long prevented the establishment of a Palestinian state alongside the Jewish state of Israel.

But Krauss isn’t totally wrong when he states Ramy’s activism is “a major departure from the approach of the Palestinian leadership.” While Ramy wraps his rejection in the soothing cloak of human rights work, his father favored false motions of diplomacy. The methods are different, but the goal is the same.