The Los Angeles Times’ Noga Tarnopolsky applies a sliding scale when it comes to Israeli and Palestinians extremists and hard-liners. According to Lexis-Nexis searches, the Jerusalem-based correspondent has yet to identify any Palestinian politicians, policies, or parties as hard-line, despite the fact that the Gaza Strip is ruled by Hamas, a designated terror group. 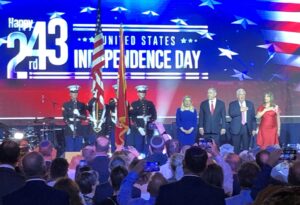 On the other hand, Tarnopolsky regularly finds hard-line or extremist Israeli politicians, policies or parties. Earlier this month, at the U.S. Embassy’s Independence Day celebration in Jerusalem she even found “some of the most far-right Jewish settlers that Israel has to offer,” as she wrote together with Tracey Wilkinson (who reported from Washington, DC) in the July 8 article entitled “The provocations of Trump’s ambassador to Israel are upending decades of U.S. diplomacy.” About the July 2 celebration at the Jerusalem Convention Center, Wilkinson and Tarnopolsky wrote:

Joining in a toast that extolled what Friedman called the biblical connection of Jerusalem to the birth of the United States were Prime Minister Benjamin Netanyahu and, making a rare appearance at an official U.S. event, some of the most far-right Jewish settlers that Israel has to offer. The scores of Palestinians who were typically guests in years past were nowhere in sight.

This CAMERA researcher attended the July 2 event, and saw plenty of activists and representatives of Israel’s right-wing but did not see any “of the most far-right Jewish settlers that Israel has to offer.” Members of this most extreme group would likely be affiliated or identified with the Jewish Power party, an ideological heir of Meir Kahane’s racist Kach party. The most extreme settlers that Israel has to offer would be those who advocate violence (including price tag attacks against property or Israeli forces), incite violence, or take part in violence. The most far-right elements have been involved in deadly attacks including the horrific fatal attack against the Dawabsheh family.

Since this author did not sight anyone like that, CAMERA asked The Los Angeles Times to identify which “most far-right Jewish settlers” had attended the event. Were Itamar Ben-Gvir, Baruch Marzel, Michael Ben-Ari in attendance? If not, who exactly among Israel’s most extreme far-right settlers was there?  Though The Times acknowledged CAMERA’s email, editors have yet to provide the names of the “most far-right Jewish settlers” who allegedly attended the official U.S. event.

Ironically, in contrast, the authors blandly refer to Hanan Ashrawi as a “veteran Palestinian politician” while she herself has on numerous occasions justified violent attacks and therefore makes a good match for Israel’s most extreme far-right settlers.