Last December, the Forward gaslit Jews with the claim that “‘From The River To The Sea’ Doesn’t Mean What You Think It Means,” an opinion piece by University of Arizona professor Maha Nassar. In January, the publication gave space to Ariel Gold, an activist with the pro-Iran, pro-Maduro group Code Pink, to advocate for housing discrimination against Jews. This month, the publication once again defies all credible expectations, hitting yet another new low with justifications for Palestinian Authority payments to terrorists who murder Jews. (“Does The Palestinian Authority ‘Pay To Slay’ Jews? Here’s How We Palestinians See It,” July 10.)

In the second paragraph, author Muhammad Shehada claims “Pay to Slay” is a “canard” that has been debunked by the Washington Post. This is grossly dishonest. The Post fact-check to which he refers took issue only with the claimed total amount of the payments, $350 million, that Israeli Prime Minister Benjamin Netanyahu asserted in a speech – but the Post’s piece acknowledges, without caveat, that such payments are in fact being made: “the State Department, by law, already deducts from its Palestinian aid budget a figure that represents the amount of money the Palestinian Authority pays to people convicted of terrorism. The exact number is classified ….” 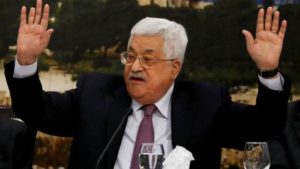 The same Post article continues, “in the Palestinian Authority’s budget, one can find $350 million in annual payments to Palestinian prisoners, ‘martyrs’ and injured, but can one with certainty say they are all terrorists?”

Inarguably, the Palestinian Authority is paying $350 million to prisoners. It can reasonably be argued that not all of them are terrorists, and certainly not all have committed murder. But it’s also inarguable that at least some have. The Post continues:

Yet at the same time, Palestinians acknowledge making payments to the families of suicide bombers and people convicted of heinous attacks. Hakim Awad — the then-18-year-old militant mentioned by Netanyahu who murdered five family members in a West Bank settlement — receives about $14,000 a year.

Yet even if one accepts Palestinian complaints about due process, there is little doubt that the system allows people to be rewarded for what many Americans would call terrorism…. 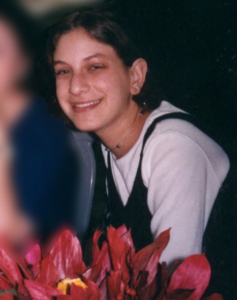 Malki Roth, one of the victims of the Sbarro bombing.

Payments continue to the family of the suicide bomber who killed 15 people, including four Americans, at a Sbarro cafe in Jerusalem in 2002, and to the bomb maker, other documents show.

The Post further explains that in the case of so-called “martyrs,” those who were killed, families get the payments – even if those families are not living in either the West Bank or Gaza: “Note: Payments for families in the Palestinian diaspora are about double the level for families inside.”

As a New York Times tech reporter learned the hard way, pay-to-slay is not, as Shehada would have it, a canard. In April of 2018, after an article about Facebook and “fake news” called such payments a “conspiracy theory,” the Times printed the following correction:

An article on Sunday about Campbell Brown’s role as Facebook’s head of news partnerships erroneously included a reference to Palestinian actions as an example of the sort of far-right conspiracy stories that have plagued Facebook. In fact, Palestinian officials have acknowledged providing payments to the families of Palestinians killed while carrying out attacks on Israelis or convicted of terrorist acts and imprisoned in Israel; that is not a conspiracy theory.

Shehada is certainly entitled to his own opinion, but, as the saying goes, not to his own facts. So why would the Forward allow him to make such an unfounded assertion in its pages?

Shehada’s claim that these payments are “welfare payments” has also been disproven. Sander Gerber and Yossi Kuperwasser wrote in the Washington Examiner in January of this year:

That means that in 2018, prisoners received, on average, $14,285 – more than the average salary of a civil servant. Families of those killed received on average $4,800, while actual welfare recipients received only on average $1,813 per family. (While the Washington Post took issue with Kuperwasser’s 2017 figures, the Post’s own estimate for payments to prisoners in 2017 is somewhat lower and for payments to families somewhat higher than Gerber and Kuperwasser’s 2018 figures. The Post, however, does not include general welfare payments for comparison.)

In 2013, it was reported in the Guardian – hardly a hasbara mouthpiece – that:

The law of the prisoner narrowly delineates just who is entitled to receive an official salary. In a recent interview, Ministry of Prisoners spokesman Amr Nasser read aloud that definition:

A detainee is each and every person who is in an Occupation prison based on his or her participation in the resistance to Occupation.

This means crimes against Israel or Israelis. Nasser was careful to explain:

It does not include common-law thieves and burglars. They are not included and are not part of the mandate of the ministry.

Under a sliding scale, carefully articulated in the law of the prisoner, the more serious the act of terrorism, the longer the prison sentence, and consequently, the higher the salary. Incarceration for up to three years fetches a salary of almost $400 per month. Prisoners behind bars for between three and five years will be paid about $560 monthly – a compensation level already higher than that for many ordinary West Bank jobs. Sentences of ten to 15 years fetch salaries of about $1,690 per month. Still worse acts of terrorism against civilians, punished with sentences between 15 and 20 years, earn almost $2,000 per month.

These are the best salaries in the Palestinian territories.

The Washington Post further reports, “the World Bank said in a 2007 report that the martyrs fund did ‘not seem justified from a welfare or fiscal perspective,’ that the prisoners fund was ‘the most generous PA program’….”

The Post fact-check that Shehada cites also confirms that “payments increase with the length of incarceration,” in other words, with the severity of the crime. Since the Post’s article is based in part on documents provided by the PLO itself, Shehada’s claim that “neither Greenblatt nor Netanyahu have provided evidence to back their claim that the PA rewards Palestinians for ‘murdering Jews,’ with an increase in the reward concordant to the number of Jews killed,” is specious.

Despite his opening claim that pay-to-slay is a “canard,” later in the piece, Shehada grudgingly admits that it’s possible that some of these payments might be going to terrorists, but justifies them anyway by repeating the previously-debunked claim that the high conviction rates in Israeli military courts are proof that they are “kangaroo courts.” CAMERA has already addressed this issue. In both US military courts and US civilian criminal courts, the conviction rate is also above 90 percent. This is because unlike litigants in civil cases, a criminal prosecutor may only bring charges when there is substantial evidence to support a conviction.

As CAMERA wrote previously, in Israeli military courts, the prosecutor’s obligation is even more stringent than in American civilian or military courts. In the Israeli military system in the West Bank, a defendant who is acquitted is entitled to both damages and attorney’s fees. Such an award, of course, would be paid from the public purse, and would be in addition to the waste of public resources in the form of the prosecutor’s own time spent on a failed prosecution. For this reason, IDF prosecutors only bring indictments in cases in which they have a high chance of success. Colonel Maurice Hirsch, the former IDF Head of Military Prosecutions in Judea and Samaria, told CAMERA that during the time that he was in charge of the military prosecutors’ office, his instruction to his prosecutors was, “if you have any doubt, don’t bring an indictment.”

Nor does Israel imprison “Palestinian nonviolent activists,” as Shehada claims, unless you consider stone-throwing “nonviolent.” Even a child throwing a rock can kill another child.

Even as he propagates these falsehoods, however, Shehada makes some noteworthy admissions. He notes that:

Official records show that back in 1964, the Palestinian Liberation Organization created a “Martyrs Fund” to aid and compensate all Palestinians killed, detained, or wounded by Israel as casualties of the conflict and the struggle for independence.

Moreover, he notes, “locally, Palestinian prisoners and martyrs are usually seen as either victims or heroes who paid great personal sacrifices in pursuit of their freedom and dignity.” The fact that such people are viewed as heroes is, of course, the crux of the problem.

Only a few days after writing this piece, Shehada wrote, also in the Forward and in reference to Hamas official Fathi Hammad’s call to kill diaspora Jews, that “it’s crucial for us to denounce and protest such anti-Semitic language whenever it crops up in our struggle for freedom and dignity. We must keep our struggle from getting polluted by such poisonous and dehumanizing notions.” Yet, he minimizes and justifies the morally reprehensible pay-to-slay program, which puts a bounty on the head of every Israeli. And the Forward gives him the platform to do so in a putatively Jewish publication.