Dec. 21 Update: NY Times Publishes Correction, LA Times Runs Follow Up Article
Dec. 16 — Weeks after many news media outlets attributed the Nov. 12 fire at a mosque in the West Bank village of Mughayer to Jewish arsonists, an Israeli firefighters’ investigation concluded a few days ago reveals the cause was actually an electrical malfunction. CAMERA followed up with media outlets that had initially reported as fact that the mosque was attacked. Several media outlets took commendable steps to set the record straight and update news consumers with the new information, while others have done nothing to clarify their unfounded reports.
On Dec. 11, Chaim Levinson reported in Haaretz about the Israeli investigation (“Mosque blaze was electrical fire, not arson, firefighters say“):

Israeli firefighters have determined that a fire at a mosque in early November was an electrical fire, rather than an act of arson as was previously believed.

Overnight on November 12, Palestinians in the village of Mughayer, close to Ramallah, noticed that the village Mosque had gone up in flames. Locals claimed that the mosque had been set ablaze by arsonists from a nearby Jewish settlement. Both Israeli police and firefighters arrived on the scene to investigate.

Firefighters found no traces of flammable materials or liquids, nor was any racist graffiti found at the scene. The electric fire is believed to have been caused by a space heater. The second floor of the mosque suffered extensive damage.

Associated Press was among the many media outlets which over the last few weeks reported as fact that the mosque fire was arson. In addition to a Nov. 12 news article (“an attack Wednesday on a mosque in a West Bank village ignited a fire that destroyed its first floor”), multiple AP photographs that day showing damage from the fire were accompanied by captions referring to damage in a mosque “following an attack in the West Bank village of Mughayer, north of Ramallah. . . ” Among those captions were the following:
One of the unfounded AP photo captions about an “attack” on the mosque even appeared on the Haaretz site alongside Levinson’s article about the investigation concluding that there was no attack.
Following communication from CAMERA’s Israel office, Haaretz editors commendably fixed the caption immediately. It now refers to “a fire-damaged mosque.”
Associated Press also commendably set the record straight following correspondence with CAMERA. Editors fixed the captions, removing the phrase which had stated as fact that the damage was due to an attack. The captions now attribute the damage to a “mosque fire” instead of to an “attack.” In addition to noting the Palestinian mayor’s claim of arson, the revised accurate captions also now cite the Israeli findings that the fire was accidental.
In addition, the Associated Press commendably published an article yesterday detailing the findings of the Israeli investigations. The Dec. 15 AP article reports:

The fire department said Monday that a blaze last month at a West Bank mosque most likely resulted from an electrical problem, not arson.
The November 12 fire destroyed the first floor of the mosque in the village of Mughayer near Ramallah, and Palestinian residents accused Jewish settlers of setting the blaze. . .
Fire Services spokesman Asaf Abras said that fire investigators, working with police and the Shin Bet security service, believe the fire was an accident.
Abras says investigators found no combustible materials or graffiti at the site. Such items would point to settler vandalism.

AFP Fails to Correct, Update
Agence-France Presse, whose captions were even more problematic than AP’s, has not responded to CAMERA requests to set the record straight. Its unsubstantiated captions refer to “a mosque which was set ablaze by Israeli settlers” and further claim that “Israeli settlers torched the West Bank mosque in an apparent revenge attack.”
In addition to the problematic photo captions, AFP also had published several articles referring to the “mosque attack” and stating as fact that “suspected Jewish extremists torched a West Bank mosque.”
Unfortunately, AFP has a history of failing to set the record straight.
New York Times Publishes Follow Up
The New York Times had referred to the mosque fire in two stories. The initial article, on Nov. 13, carefully noted “a mosque in a village in the West Bank was damaged overnight in what was said to be an arson attack.” (Emphasis added.)
A subsequent article, on the other hand, (“In Jerusalem’s ‘War of Neighbors,’ the Differences Are Not Negotiable,” Nov. 18) stated as fact that arson was at fault for the fire. The report stated that Mahmoud Abbas: “also mentioned a recent arson at a West Bank mosque (a firebomb was thrown at an old synagogue in an Arab-Israeli town on the same day).”
In response to communication from CAMERA, The Times published a commendable follow up article Dec. 14 (“Arson Ruled Out in Fire at West Bank Mosque, Israeli Police Say“):

A fire at a West Bank mosque last month was most likely caused by an electrical fault and not the result of arson, Israel’s police said on Sunday.

At the time, Palestinian officials charged that the mosque fire, in the Palestinian village of Mughayer, near Ramallah, was the work of Jewish extremists.

The police said that a joint investigation carried out by the Israeli police, fire service and Shin Bet security agency, with the help of Palestinian Authority investigators, ruled out arson because no evidence of flammable liquids and no Hebrew hate graffiti typical of attacks by Jewish extremists were found at the scene.

Instead, it concluded that the most likely cause was an electrical fault in the area of a heater, which appeared to have been moved from its original place by the time the investigators arrived.

The Times has not yet published a clarification for the Nov. 18 report which had definitively stated that an arson was at fault for the fire.
Los Angeles Times: No Update, Clarification
As of this writing, The Los Angeles Times has also not followed up on CAMERA’s calls to publish information about the Israeli investigation or to clarify the earlier problematic report citing “the torching this month of a mosque outside the West Bank city of Ramallah.”
No Follow Up From Reuters
Reuters, which had originally covered the mosque fire citing the allegations of arson, has also not published a follow up story about the Israeli investigation. Of particular note, was this tweet by Reuters correspondent Noah Browning in which he equated the blood-soaked religious books from the Har Nof massacre with the burnt Korans from the mosque fire: 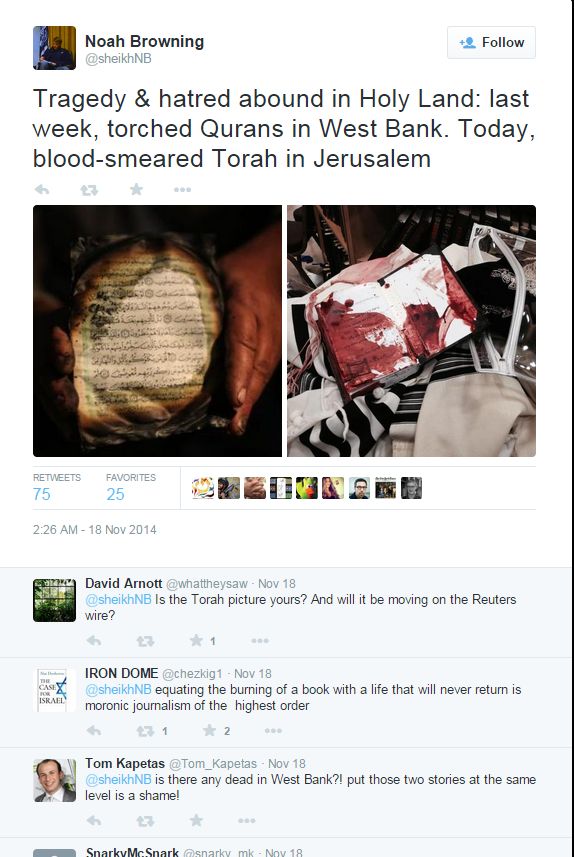 A tweet posted by Reuters correspondent Noah Browning in the aftermath of the synagogue bloodbath revealed an appalling callousness to the loss of Jewish lives, as well as a shocking obtuseness in his understanding of events . . .
Perhaps Browning believed he was revealing an unconventional but clever insight by comparing a damaged Quran, whose burning he unquestioningly attributed to Jews, with a prayer book soaked in blood shed by Palestinian terrorists. But what his outrageous moral equation actually revealed was his own cold-hearted disdain both for Jewish lives and for journalistic integrity.

In the wake of the Haaretz report about the Israeli findings ruling out arson, this writer tweeted Browning:
As of this writing, there is no update from Reuters and no further response from Browning.