CAMERA Arabic has prompted a CNN Arabic correction of an article which referred to the Western Wall, the holiest site for Jewish prayer, by its Muslim name, “Al Buraq” wall.  As noted earlier this week on CAMERA’s Snapshots blog, the May 2 CNN Arabic article (“Founder of the ‘Ali Baba’ group to visit Israel and meet Netanyahu“) noted the visit of Ali Baba CEO Jack Ma to the holy Jewish site, but referred to its by its Islamic name, stating:  “Activists on social networking photographed Ma, standing by the Wall of Al-Buraq in Jerusalem during his visit to Israel.” 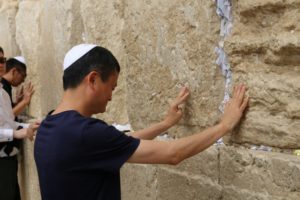 Use of an Islamic name in context of a visit intended to honor the site’s special status in Judaism (indeed, Ma is pictured with a kippa) is clearly inappropriate and misleading. Furthermore, not only does CNN in English not use the term “Al-Buraq” wall to refer to the Western Wall, but CAMERA Arabic has confirmed that CNN Arabic has not used this misleading term in the past.

CNN editors agreed that the Islamic terminology was problematic, and commendably changed it to correctly refer to the “Western Wall in Jerusalem.”