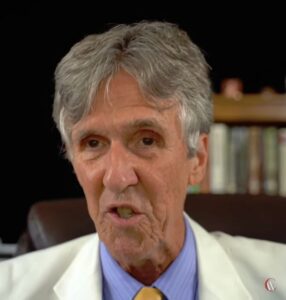 E. Michael Jones, a well-known Catholic antisemite who resides in South Bend, Indiana, has spent the past few days giving advice to the leaders of Iran, telling them that they should not regard U.S. President Donald Trump as their enemy, but that their real problem is with Israel and Jews who control American foreign policy in the United States.

He offered this advice in two recent appearances on Iran’s PressTV.

Jones’s cozying up to the mullahs should come as no surprise. Over the years, he has established himself as a booster for the ayatollahs who have murdered thousands of Iranian citizens since the 1979 revolution in that country.

Speaking at a conference in Tehran in February 2013, during which he portrayed Jews as having a corrupt influence on American society, Jones declared, “Iran is the leader of the free world.” He also described the shootings of Jews at synagogues in Pittsburgh, Pennsylvania and Poway, California as a response to the role “the Jews” have played in undermining the moral order. The Christian moral order, Jones says, has been “overridden by an operating system or by software that you would call ‘The Jews.’”

Like Alex Awad, Jones has portrayed American foreign policy as under the malign control of American Jews.

Jones is at it again, repeatedly blaming “three rich Jews” for the Trump Administration’s decision to kill Qassem Soleimani, the leader of the Islamic Revolutionary Guard Corps who was responsible for the death of thousands of his fellow Muslims in places like Lebanon, Syria, Iraq, Afghanistan and Yemen. (The Trump Administration made the decision to kill Soleimani after an Iranian-backed militia killed a U.S. citizen in a rocket attack on Dec. 27, 2019 and attacked the U.S. Embassy in Iraq on Dec. 31, 2019.)

On two separate appearances on Iran’s PressTV, Jones sent a message to the Iranian Revolutionary Guard that Israel — not President Donald Trump  — is the enemy they should be worried about.

“You don’t want to play into the hands of your enemies,” he said during his Jan. 8, 2020 appearance. “And I’m talking about the Israelis.”

Jones started giving advice to Iranian elites during his Jan. 6, 2020 appearance on PressTV during which he declared that “the people who control the mainstream media” wanted to “precipitate the United States into a war with Iran.” The immediate cause of the confrontation Jones declared, is the Trump Administration’s rejection of the nuclear deal with Iran, which was negotiated and agreed to under the Obama Administration.

“It got rejected because of the money that came from three rich Jews,” said Jones. “Three rich American Jews, Sheldon Adelson,  Paul Singer, Bernard Marcus, the three main contributors to the Republican party.” (As the text below reveals, the phrase “three rich Jews” is akin to a verbal tic for Jones.)

“Israel is going to hold America’s coat while America goes and beats up on Iran,” Jones said. “This is not what should happen, OK? That’s what the media wants to happen.”

By portraying the U.S. media as promoting further conflict and tension between the U.S. and Iran, Jones is simply ignoring reality. The New York Times and the Washington Post, for example, published multiple articles that warned of the prospect of a wider war in the Middle East as a result of Soleimani’s killing. Numerous television broadcasts portrayed Soleimani as a hero to the Iranian people. Large swaths of the American media have been inveterately critical of President Trump and increased their criticism of his presidency in light of Soleimani’s death.

After describing how he was treated well by Iranians on his last visit to the country even as people chanted “Death to America” in the street, Jones continued to inveigh against Jews and Israel. “There are people, the Israel lobby, the rich Jews I mentioned, they want America to get into a war with Iran for Israel. Israel is the cause of the mess that we are in right now.”

“Israel is the cause of this mess,” he said. “Israel should be held responsible for what happens.”

He also blamed Israel for America’s 2003 invasion of Iraq and declared “Probably no Jew died in this war.” (They did.) This is rhetoric redolent of 1920s Germany, where antisemites falsely claimed that Jews did not serve in the German military during World War I.

During his appearance, Jones warned Iranian decision makers against overreacting to Soleimani’s death and advised waiting until President Trump is removed from office as a result of a recent vote for impeachment against him in the U.S. House of Representatives. Trump could be removed from office by the U.S. Senate because of his role in the “murder” of Soleimani, Jones said.

“The Jews want Iran to attack America,” Jones said. “I don’t know how many times I have to say this. That’s the main thing I would say to the Iranian people.”

During this interview, Jones spoke as if there was an alliance between himself, a Christian, and the Iranians against the evil machinations of Jews and Israel. He invoked the three magi who visited the infant Jesus in Bethlehem to cement the alliance and buttress Iranian self-esteem.

“My German ancestors were chasing pigs through the forests of Germany when the Iranians were visiting Jesus Christ,” he said. “We celebrated that today, the Feast of the Epiphany. Three Iranians, three Persians, showed up. The first three human beings who were not Hebrew to worship Jesus showed up there. We’re talking about a civilization that is ancient, one of the most ancient in the world.”

Jones’ second interview took place just as PressTV reported that Iran had attacked a number of military bases in Iraq with missiles (which ultimately caused no casualties). During this interview, when he addressed himself directly to the Islamic Revolutionary Guard, Jones said Iranians should not blame the American people for the Trump Administration’s decision to pull out of the nuclear deal.

“That was three rich Jews who control the Republican party,” he said. “They wanted it. They got what they wanted and that was not the will of the American people.”

Iran should not attack U.S. targets, Jones warned, because that will only help the Jews achieve their plans.

“You don’t want to pay into the hands of your enemies,” he said. “And I’m talking about the Israelis. I mean the whole point of this is to get America to fight Israel’s wars. That’s what’s been going on for 20 years now. That was the whole point of the neoconservative takeover. Do you want to do that? . . . I’m talking about you, the Revolutionary Guard now. Do you want to propel America into another war in the favor of Israel?”

It’s time to call Jones what he is: The Ayatollah’s man in South Bend.