In response to communication from CAMERA, CBC acknowledged initial confusion about the find's location and agreed that the article should be clarified to identify "once and for all where this cave is located." On Friday, March 26, the article was amended to clearly state: "The roughly 80 new pieces are believed to belong to a set of parchment fragments found in a site in southern Israel known as the 'Cave of Horror' …"

"These are the things you are to do: Speak the truth to one another, render true and perfect justice in your gates. And do not contrive evil against one another, and do not love perjury, because all those are things that I hate—declares the Lord” (Zechariah 8, 16-17). These verses imploring truth-telling were inscribed on the biblical scroll fragments found recently in southern Israel, in the Cave of Horror where Jewish refugees hid nearly 2000 years ago. Ironically, the Canadian Broadcasting Corporation has contorted itself in a dizzying pretzel to conceal the truth about these same fragments: specifically, the ancient Jewish finds were discovered in Israel, not the disputed West Bank.

The Cave of Horror is located within Israel's pre-1967 armistice lines. In 1961, years before the West Bank changed hands from Jordan to Israel in 1967 Israeli researchers published about their survey of the site located in Israel's Nahal Hever.

The roughly 80 new pieces are believed to belong to a set of parchment fragments found in a site in southern Israel known as the "Cave of Horror" — named for the 40 human skeletons found there during excavations in the 1960s — that also bear a Greek rendition of the Twelve Minor Prophets, a book in the Hebrew Bible. The cave is located in a remote canyon around 40 kilometres (25 miles) south of Jerusalem.

The next day, however, the CBC changed the accurate headline to falsely state that the scrolls were found in the West Bank. CBC's March 17 headline erred: "New Dead Sea scrolls found in desert cave in West Bank." In addition, editors removed the information from the article itself that the Cave of Horror is "in southern Israel." Moreover, at the same time, most egregiously, editors appended the following "correction," which was nothing but a falsehood:

A previous version of this story incorrectly said the new fragments had been found in Israel. In fact they were found in a cave in the West Bank.

Similarly, on March 17 CBC also posted this erroneous "correction" on its correction page:

We amended this story, posted on March 16, about the discovery of new Dead Sea scrolls. A previous version said the new fragments had been found in Israel. In fact, the archeological site was located in the West Bank, a territory occupied by Israel.

Still, there was no statement either in the headline or the accompanying article, as there had been initially, that the find was in Israel. Moreover, the text of the article was amended to give additional geographic information, all without stating the most elementary fact:

The cave is located in a remote canyon around 40 kilometres south of Jerusalem, just west of the Dead Sea and south of the West Bank.

Readers were left to their own assumptions to puzzle out what country is 40 kilometers south of Jerusalem, just west of the Dead Sea and south of the West Bank.

Also on March 18, editors again amended the corrections page, overriding the previous version which had falsely claimed that the discovery was made in the West Bank. Editors amended that "correction" to obtusely state:

Weamended this story, posted on March 16, about the discovery of new Dead Sea scrolls to clarify where the scrolls were found. 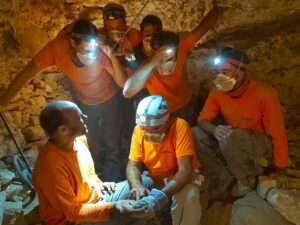 Unbelievably, editors were not yet done with their obfuscating "corrections" which confounded rather than clarified. Thus, on March 19, the correction appended at the bottom of the article was worked over yet again to delete the fact that "A previous version of this story said the new fragments had been found in Israel but was later incorrectly updated to say they were found in the West Bank." The March 19 appended correction, which remains as of this writing, elliptically states:

This story has been amended to clarify where the scrolls were found. They were found just west of the Dead Sea and south of the West Bank.

In other words, the more recent correction is even less informative and less transparent than its lacking predecessor, concealing from readers that the article had previously, and wrongly, reported that the scrolls were found in the West Bank.

Yesterday, CAMERA contacted CBC to request that editors reinstate the information that the Cave of Horror is in southern Israel.

With this troubling saga, CBC demonstrates neither the truthfulness championed by Zechariah the prophet nor the quality, precision and clarity promised by CBC's Standards and Practices.

While CBC contorts itself to avoid stating that the scrolls were found in Israel, Al Hurra yesterday commendably corrected its erroneous reporting on the identical point. The Arabic-language American media outlet initially erred in its March 16 article : “Israel announced the discovery of a 2000 years old manuscript in the West Bank desert." Similarly, the following paragraph erroneously stated: "The remnants of two manuscripts were found in a West Bank desert cave."

Yesterday, in response to communication from CAMERA Arabic, editors commendably revised those passages to correctly refer to the discovery in the "Judean desert in Israel" and manuscripts "found in a cave known as the Cave of Horror." Moreover, editors commendably appended the straightforward correction to the bottom of the article (screenshot at left):

Previously, we noted that the cave is located in the West Bank, but following communication with the Israel Antiquities Authority spokeswoman, Yuli Schwartz, it turned out to be in Israel.

Schwartz has told al-Hurra that "the newly found documents were located inside Israeli territory, namely near the Hever wadi.”