Ayelet Gundar-Goshen, an Israeli novelist, journalist and clinical psychologist, appeared from Tel Aviv with CNN’s Chief International Correspondent Christiane Amanpour in a May 31, 2019 broadcast of the series, “Amanpour,” peddling the notion that Israelis suffer from Post Traumatic Stress Disorder (PTSD), which Prime Minister Benjamin Netanyahu cynically manipulates to hold onto power. Gundar-Goshen further claims that Israeli fears and anxieties – understandable in the past – are no longer justifiable and prevent a peace agreement with the Palestinians.

Amanpour also discussed Gundar-Goshen’s most recent novel The Liar, translated into English from the Hebrew version, The Liar and the City, dealing with the Israeli psyche as related to her PTSD claims. Gundar-Goshen, who has a master’s degree in psychology from Tel Aviv University, has worked as a journalist and news editor at the Israeli newspaper Yedioth Ahronoth.

An indication of the detached-from-reality nature of this discussion is that it contains no mention of Hamas or Hezbollah or dangers posed by the Palestinians under the so-called “moderate Palestinian leader” Mahmoud Abbas. 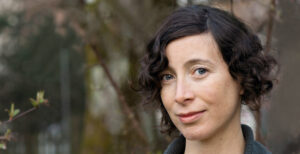 Beyond this, there is a  huge problem with Gundar-Goshen’s PTSD claim: According to the Mayo Clinic, for example, the medical definition of PTSD includes symptoms such as “hopelessness about the future” and “difficulty experiencing positive emotions.” But polling data consistently shows Israelis to be among the most positive and happy people in the world. For example, Gallup polling in 2019 shows that Israel is the 13th happiest country in the world, ahead of Luxembourg, the United Kingdom, Ireland, Germany, Belgium, the United States and 137 other countries; the same Gallup poll in 2018 had similar results.

The program’s transcript is available as is the video.

Amanpour’s opening statement indicated that Netanyahu might be targeted in the discussion:

“… the betting is that Israelis will reelect Netanyahu for a fourth consecutive term. That’s despite him facing indictment for multiple counts of bribery and fraud… let’s dive into the psyche of the Israeli people right now …”

I think if I had to see Israel as a patient, then I would say this patient suffers from severe Post Traumatic Stress Disorder (PTSD). I mean, you have a nation that suffered a severe trauma, not just talking about the trauma of the Holocaust, I’m talking about the complex trauma of 2,000 years of exile.

And then, even though the situation changed and the trauma is no longer present at the moment, we still feel that the trauma is here right now. So, it is if the past is occurring again and again, even though the real situation is very much different than what it used to be. We’re no longer in existential threat as we were in Second World War but we still feel that we suffer from this threat. And this shapes the whole way we act…

… it’s a very simple narrative [Netanyahu’s], you know, it’s like the kids’ stories that I read to my little kids. You have the ultimate good being the Israelis, you have the ultimate bad being the Palestinians, this story views the Palestinians as a sort of reincarnation of previous trauma, so that we had king pharaoh and then we had Hitler and now, we have them. And it’s a very compelling story but this is not – this is not reality.

Reality is much more complex than that. And in reality, the Israeli people, I mean, we’re still a victim right now but we are victims of our own anxieties and of our own fear. I think we are now the victims of the fact that we don’t try to initiate a peace process that even the word peace is, today, considered as a naive word. We don’t even say the word, peace, anymore. We say an agreement. So, I think Netanyahu did a very good job in delegitimizing the Israeli left and the idea that you could actually try to negotiate and to solve this conflict rather than to relive it again and again and again.

Why is there no peace?

If it’s not a mass case of PTSD among Israelis that is preventing peace with the Palestinians, might there be some other cause? Why, for example, have the Palestinians rejected statehood at least three times?

It’s certainly not unreasonable for Israelis to be highly pessimistic about the chances for genuine peace with a society (the Palestinians) whose people are incited from cradle to grave to hate and harm Jews. It’s a society that honors and rewards those who injure and kill Jewish civilians.

Indeed, the Israelis are fully aware of the attitudes of the Palestinian leadership. For example, Abbas’ 2015 declaration:

Mr. Abbas, the Palestinian Authority president, said the following on Palestinian television on Sept. 16: “We welcome every drop of blood spilled in Jerusalem. This is pure blood, clean blood, blood on its way to Allah. With the help of Allah, every martyr [murderer of Jews] will be in heaven, and every wounded will get his reward.” (Wall Street Journal, Oct. 18, 2015)

This declaration was apparently triggered by a false rumor that Israeli officials planned to enter the Al-Aqsa Mosque located on Israel’s Temple Mount. Accordingly, Gundar-Goshen seems to fail to factor in the pervasive Islamist mindset of the Palestinian dominant culture.

Additionally, there are the Hamas Gaza Strip Palestinian rulers (even more extreme than the Abbas government) who build terror tunnels and routinely carry out and allow rocket attacks upon Israeli civilians. More recently, on essentially a daily basis, arson balloons that drop fireballs are being launched upon Israeli communities at the Gaza border, aiming to injure Israelis and destroy property. The charter of Hamas still calls for the destruction of Israel and the murder of all Jews. And there’s the terrorist entity Hezbollah also building terror tunnels, committing attacks upon Israel while taking its cue from its patron, the fanatical Iranian leadership which poses an existential threat to Israel.

Amanpour is a veteran at misleading viewers about Israel. In 2014, Amanpour misled viewers about Israel during coverage of the memorial service for former South African President Nelson Mandela. In 2016, Amanpour used the passing of Israeli leader Shimon Peres to malign Israeli policies. Also in 2016, Amanpour presented as reliable the false claims of a fringe political group that holds Israel entirely responsible for the conflict with the Palestinians.

CNN’s God’s Warriors, hosted by Amanpour, was a 2007 three-part series that examined the growing role of religious fundamentalism in today’s world. In the first part, Amanpour falsely equated Jewish and Christian religious fervency with Muslims endorsing “martyrdom,” or suicide-killing. The series emphasized the alleged sins of the Jews and slurred Christians.

A long list of Amanpour’s broadcasts misreporting about Israel is found on CAMERA’s Amanpour page.

If one is to take Gundar-Goshen’s psychological credentials seriously, her false diagnosis of societal Israeli PTSD amounts to medical malpractice.

The lessons from the history of the Arab conflict with Israel have not been learned by either Gundar-Goshen or Amanpour. They fail to realize that there is no peace because Palestinian leaders have created a culture dedicated to Israel’s destruction. This dedication, mainly based on Islamist theology, is energized by continuous incitement from those leaders, along with mosques, media and schools.

Amanpour’s penchant for misleading viewers about Israel and the Middle East amounts to journalistic malpractice and viewers seeking to become informed about the Middle East should beware of her presentations.