France 24 recently published on its Arabic website an edited AFP report (“Thousands of Palestinians commemorate the 71st anniversary to the Nakba”) about the May 15 protests in the Gaza Strip, along the fence separating that territory from Israel.

In its report, France 24, a state-owned news network, inaccurately characterized hundreds of thousands of those who left Israel in 1948 as having been “expelled,” ignoring that the vast majority fled, often at the urging of their own leaders. It reads (translation and emphasis by CAMERA Arabic):

“The Palestinians commemorate on the May 15th of every year the Nakba of 1948, when hundreds of thousands of Palestinians were expelled from their homes during the war that preceded the establishment of Israel”.

The original version of the report by AFP, though, uses a different term, stating that the Palestinians “were made to emigrate/ were displaced” ( هجر in Arabic): 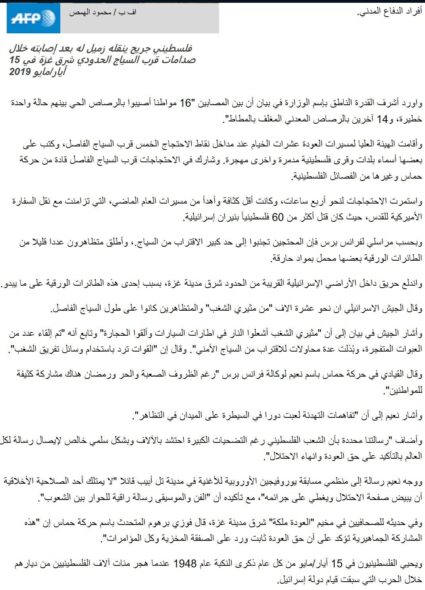 Despite repeated attempts to contact editors of France 24’s Arabic website through various channels, no response has come from the network, which has left the error it introduced uncorrected. By contrast, Reuters Arabic commendably fixed nearly identical wording last February, after that had falsely referred to Palestinian refugees as having been “expelled.” The updated language states that the refugees “either fled or were forced to flee.”