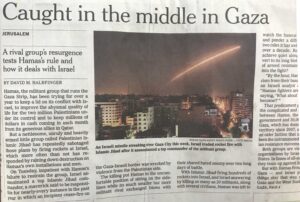 An Agence France Presse photograph appearing on the Nov. 15 front-page of the International New York Times reportedly shows an Israeli missile flying over Gaza City. The caption reads: “An Israeli missile streaking over Gaza City this week. Israel traded rocket fire with Islamic Jihad after it assassinated a top commander of the militant group.” The photograph was taken during Israel’s “Operation Black Belt” earlier this month, when over a two day period, Islamic Jihad launched more than 450 rockets and mortar shells at Israel over a two-day period, and Israel responded with scores of air strikes against Islamic Jihad targets.

Israeli missile expert Uzi Rubin, however, questions the AFP and New York Times captions, maintaining that the projectile most resembles a Palestinian rocket, and not an Israeli missile, from the Iron Dome or otherwise. Dubbed “the father of Israeli missile defense,” he is the former head of Israel’s Missile Defense Organization. In a July 2014 article about Palestinian rockets, The Times turned to Rubin as an expert source, referring to him as a “retired Israeli general and pre-eminent weapons expert.” The paper earlier cited Rubin, identifying him as “founder of Israel’s antimissile program,” in a 2013 article about the effectiveness of the Iron Dome.

Rubin reported to CAMERA that the path of the projectile in the front-page photograph resembles that of an inaccurate Palestinian artillery rocket, and not an Israeli missile. He concludes that barring any contrary information, the rocket appears to be a Palestinian rocket fired towards Israel.

Rubin qualified that it is impossible to know which way the camera lens is facing, and if it is facing eastward it theoretically could be a missile from Israel. On the other hand, if the direction is north or south, the rocket is originating from the Gaza Strip. But, regardless of the direction, he said that the rocket’s path does not resemble that of an Iron Dome missile.

CAMERA has called upon both the AFP and The New York Times to investigate and verify the projectile’s origin. Furthermore, if it is indeed a defensive Israeli missile fired from the Iron Dome, The Times cut key information from the AFP caption that the reported Israelis missile was defensive, referring only to an “Israeli missile.”