The failure last week of Blue and White leader Benny Gantz to form a coalition, coupled with the indictment one day later of sitting Prime Minister Benjamin Netanyahu, plunged Israel into deeper political chaos, with unprecedented looming third elections on the horizon. “This is a hard one for people to sort of keep track of,” MSNBC host Ali Velshi rightly noted in his November 22 show. Indeed, analysis of the complex legal and political situation require expertise and deep familiarity with Israel and its governance.

Velshi turned to NBC news correspondent Cal Perry to provide that insight, brandishing the reporter’s credentials as someone “who’s done extensive reporting from the Middle East.” But far from revealing insight and understanding about the Israeli political system, Perry’s statements reveal utter ignorance.

The former CNN and Al Jazeera English journalist completely disqualified himself as a knowledgeable observer of Israeli politics when he opened with his repeated references to Israel’s constitution. He asserts:

history: no formal constitution; some functions of a constitution are filled by the Declaration of Establishment (1948), the Basic Laws, and the Law of Return (as amended)
amendments: proposed by Government of Israel ministers or by the Knesset; passage requires a majority vote of Knesset members and subject to Supreme Court judicial review; 11 of the 13 Basic Laws have been amended at least once, latest in 2018 (2018) 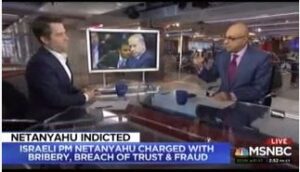 A basic law explicitly states that an indicted prime minister may continue to serve in his post. According to Clause 18 of the Basic Law: The Government, the prime minister must step down only following conviction, involving the exhaustion of the legal appeal process, at the level of the Supreme Court. Thus, contrary to Perry’s claim, there is no legal crisis – constitutional or otherwise on that very clear point. There is, however, a different legal question that Israeli jurists are now exploring: Can a caretaker prime minister like Netanyahu continue to serve and can the President task him to form a new government? This is a much more narrow legal question which applies in the unique scenario in which Israel now finds itself.

Regarding the prohibition against the continued service of indicted ministers, that law originates in a Supreme Court 1993 ruling – not any non-existent Constitution – which compelled then Minister Arye Dery and Deputy Minister Rafael Pinhasi to step down following their indictments.

Perry further muddles the facts by claiming: “The idea here as you have said is as long as he stays in office he can avoid these charges.” This is inaccurate. As was demonstrated Thursday, staying in office does not mean that Netanyahu can avoid the charges. Rather, according to the basic law, he, like all Knesset members is entitled to appeal to the Knesset Committee for immunity from the charges. If the committee approves the request, then the full Knesset votes whether or not to grant immunity. Complicating matters, however, is the fact that that committee was dissolved with the elections in April and due to the failure to form a new government, it has yet to be reestablished.

Reflecting just how out of touch with the unique, unprecedented reality of this September’s elections, analyst Perry insists that Israeli Arabs don’t vote and have no means to influence the political process, when in fact September’s elections clearly demonstrated that the opposite is true. Velshi asks:

For most Palestinians who live in the occupied territories, Benny Gantz versus Benjamin Netanyahu doesn’t really make much of a difference. But according to the last census in 2013 in Israel Israeli Arabs account for 21 percent of Israel’s population. Some of them vote. They elect members to the Knesset. Is there any influence they can have in the next election to move that issue forward?

At this, Perry again steps into his alternate universe:

I don’t think so. And part of the problem here is intimidation. That is a community that has been intimidated against when it comes to voting day. We have heard accusations that the opposition party is putting cameras in these neighborhoods to monitor Israeli Arabs as they vote which has, at times kept people from voting. 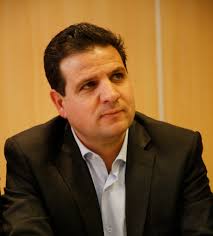 In reality, reports about activists affiliated with Likud (the ruling party, not the opposition party) placing cameras in voting stations located in Arab turns prompted an unprecedented Arab turnout for the elections. Indeed, as Haaretz reported on election day Sept. 17, the increased Arab interest in voting had the potential to greatly influence the election outcome, keeping Netanyahu out of office  (“Israeli election 2019: Israeli Arab Vote Turnout Up, Activists Say, Citing ‘Wild Intimidation’ Factor“):

The Arab turnout in this do-over election could be a decisive factor in the final outcome: Because Arab citizens overwhelming vote for Arab-led and Jewish left-wing parties, the more Arab citizens come out and vote, the harder it will be for Prime Minister Benjamin Netanyahu to form a ruling coalition. …

[Thabet] Abu Rass [codirecter of the Abraham Initiatives] attributed increased turnout to a confluence of factors, chiefly the reunification of the Joint List and recent overtures made by Zionist parties to Arab voters. As an example, he cited Kahol Lavan, the centrist party running neck and neck with Netanyahu’s Likud, and its “strong campaign with very inclusive messaging for Arab voters.”

But no less critical a factor in getting the Arab vote out has have been the “incitement and provocations of Netanyahu against this minority group,” noted Abu Rass.

Indeed, the anticipated high Arab voter turnout came to fruition. The next day, Haaretz reported an increased turnout of 10 percent  in the Arab public compared to the previous election in April (“Israel Election Results: Arab Leaders Hail High Turnout as Victory Over Netanyahu“):

The voter turnout in Arab communities rose to 60 percent in this election compared with 50 percent in the April ballot, partial results of Israel’s ballot indicate. (Live election results – click here)

The Joint List, made up of four Arab-majority parties, is emerging as the third-largest party in the Knesset according to the figures. Ninety-one percent of the vote has already been counted, Israel’s Central Elections Committee said Wednesday.

Leaders of the Joint List, heralded the result as a victory over Prime Minister Benjamin Netanyahu.

“I want to thank our public, this was a great achievement for us, the Arab public responded, went out and delivered a great vote of confidence to the Joint List, and I believe we will end up with 13 seats and send that inciter Netanyahu home,” said Joint List chairman Ayman Odeh.

The Arab population’s impressive election turnout, and its 13 seats, contributed to Netanyahu’s inability to form a government. While Cal Perry doesn’t appreciate this accomplishment, Ayman Odeh sure does.

Even when it comes to issues closer to home, like U.S. aid to Israel, Perry’s grasp of the facts is tenuous. Closing the broadcast, Perry asserts that “we are funding what most of the world views as an illegal occupation.” In fact, the vast bulk of American aid to Israel primarily funds the American arms industry. Moreover, restrictions in many cases ensure that U.S. aid is used only within Israel’s pre-1967 lines. According to Congressional Research Service:

In some instances, U.S. assistance to Israel may be used only in areas subject to the administration of Israel prior to June 1967 (see “Loan Guarantees”). For example, U.S. State Department-provided Migration and Refugee (MRA) assistance (see below), per agreement between the State Department and United Israel Appeal, may only be used for absorption centers, ulpanim (intensive Hebrew-language schools with particular focus on immigrants to Israel), or youth aliyah (relocation to Israel) institutions located within Israel’s pre-June 1967 area of control. In addition, according to agreements between the U.S. and Israeli governments, programs funded by certain U.S.-Israeli binational foundations, such as the U.S.-Israel Binational Science Foundation (see below), “may not be conducted in geographic areas which came under the administration of the Government of Israel after June 5, 1967, and may not relate to subjects primarily pertinent to such areas.”

Finally, Perry reveals his unfitness as an informed objective observer when he holds only President Trump and Prime Minister Netanyahu accountable for the lack of progress of a peace plan, completely ignoring the role of Palestinian leader Mahmoud Abbas, who has flatly refused to engage in any peace talks in recent years. Perry states:

It feels like we are going to wait another century for the deal of the century. We just had the president of the United States flip the U.S.’s position on settlements which is a nonstarter for the Palestinians. The other thing is that Benjamin Netanyahu is no longer an address for a viable peace plan. A peace plan is only as strong as the leaders who sign it. And the Palestinians view Benjamin Netanyahu as the Israeli Donald Trump, as somebody who is a nationalist, as somebody who is for settlements, somebody who is for the occupation. And they view the Americans and specifically the administration as funding that occupation in the face of this corruption. So what Palestinians see is the American government going around the world saying we are not going to stand for corruption in the Ukraine, for example, but when it comes to Israel, nothing has stopped our aid to that country. (Emphases added.)

As for Abbas’s leadership record, he last stood for elections all the way back in 2005 though he was elected only for a four-year term; he rejected peace offers made by a previous Israeli prime minister during a different U.S. presidency, rejectionism unrelated to either Netanyahu or Trump; Abbas and his cronies are up to their eyeballs in alleged cases of corruption of their own; a significant part of Palestinian territory is under the control of his Hamas rivals; he has engaged in vitriolic antisemitic rhetoric; and Israelis see him as someone who supports terrorism, with his payments of hundreds of millions of dollars a year to terrorists and their families. But Perry only sees what Palestinians see, leaving all other factors out of the equation.

With research by Shlomi Ben-Meir