“We at CNN advocate for facts and for truth,” David Zaslav, the newly installed head of Warner Brothers, CNN’s parent company, said just two months ago.

Zaslav’s pro-truth sentiments echoed earlier statements by John Malone, a board member in the Discovery-TimeWarner conglomerate which controls CNN.

“I would like to see CNN evolve back to the kind of journalism that it started with, and actually have journalists, which would be unique and refreshing,” he told NBC last November. “I do believe good journalism could have a role in this future portfolio that Discovery-TimeWarner’s going to represent.”

Unfortunately, however, longtime CNN host Fareed Zakaria apparently failed to get the memo from his new bosses directing CNN content towards fact-based journalism.

On the Sunday (June 26) broadcast of the eponymous “Fareed Zakaria GPS,” CNN’s veteran journalist fabricated: “Israel is also one of those countries that has famously not really condemned the Russian aggression in Ukraine.”

MSNBC has previously corrected the identical error, clarifying on May 5: “During Monday’s show, an NBC News correspondent made an unscripted comment that Israel had not condemned Russia over Ukraine. This was incorrect. Israel has condemned Russia at the U.N.” 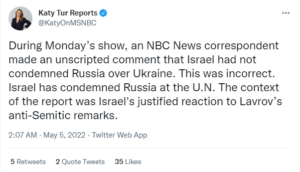 On Monday, CAMERA contacted senior CNN editors pointing out the error, providing the details of the Israeli votes in favor of General Assembly resolutions condemning Russia, and noting MSNBC’s correction of the blatant falsehood. As of this writing, we find no indication that CNN has corrected the record in any way, indicating that the network regards the new bosses’ calls for fact-based journalism as mere suggestion, as opposed to actual policy.

Stay tuned for any updates on this item.