The White House targeted pillars of Palestinian society and politics: recognizing Israel’s annexation of Jerusalem, pressuring the Palestinian Authority to cut welfare payments to the families of political prisoners, and eliminating funding for the United Nations Relief and Works Agency for Palestine Refugees. 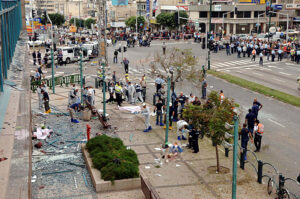 The aftermath of a Palestinian bombing attack next to a shopping center in Netanya, 2005 (GPO Photo by Moshe Milner)

The American Taylor Force Act targets Palestinian Authority payments to the family of prisoners convicted of violent crimes against Israelis, not “political prisoners,” which refers to those held for their beliefs or political activity like participation in legal, non-violent demonstrations.
The act prohibits US funding of PA or PA-affiliated organizations unless they:

The first point refers to the fact that the Palestinian Authority grants higher payments to prisoners who received longer sentences. The more violent the crime, the longer the incarceration.

And because payments are based largely on the length of the prison sentence, critics say the most heinous crimes are the most rewarded. . . .
Under the current system, the Palestinian Authority pays larger stipends to prisoners who have spent longer times in prison, with little regard for their families’ economic welfare. For example, someone who has spent 35 years in prison could earn thousands of dollars a month; someone in prison for four years might receive hundreds.

Western nations do not regard convicted, incarcerated terrorists as political prisoners, as the European Council definition makes clear.
From Venezuela, to Burma, to Iran, to Russia, Foreign Policy has applied the term to refer to citizens arrested by their own government for non-violent anti-government activities. Palestinians who carry out terror attacks against Israeli citizens are not protesting their own (Palestinian) government with non-violent activity.
Undoubtedly, it is in the interest of the Palestinian government to whitewash the terrorists for whom it pays out hundreds of millions of dollars as “political prisoners.” According to a Palestinian source, Salem Barahmeh’s Palestinian Institute for Public Diplomacy is reportedly PLO-affiliated and “has been working on amplifying the positive image of Palestine,” and thus his interest in adopting the propagandistic terminology is apparent. (The Institute’s reported PLO affiliation is not disclosed on Barahmeh’s FP piece.)
While Foreign Policy is free to publish a wide variety of opinions, including those that justify payments to terrorists and their families, it should not deceive readers about the reason that the prisoners in question are incarcerated, depicting them as “political prisoners” — which the public widely understands as those imprisoned for non-violent activity opposing their government — as opposed to convicted terrorists who carried out lethal attacks.
Separately, CAMERA prompted a revision of Barahmeh’s reference to the “displacement of entire Palestinian communities,” purportedly enabled by the Trump administration. According to the United Nations, Israel last month demolished a large part of the Khirbet Humsa encampment in the Jordan Valley — not the entire encampment. The UN statement reported: “Three quarters of the community’s population lost their shelters, making this the largest forced displacement incident in over four years.”
If that was the “largest forced displacement incident” in years, according to the UN, and it did not involve an “entire Palestinian communit[y],” then which entire Palestinian communities have been displaced, according to Barahmeh? (Incidentally, the residents of Khirbet Humsa received donated replacement shelters days if not hours after the demolition early this month. So, any “displacement” was extremely short-lived.)
In response to communication from CAMERA, Foreign Policy amended Barahmeh’s unfounded reference to the displacement of multiple “entire Palestinian communities” (in plural). The piece now refers to a singular “entire Palestinian community.” Contrary to common journalistic practice, editors did not append a note to the article alerting readers to the change.
Donate Now