During an otherwise informative segment on Israeli Chief of Staff Lt. Gen. Aviv Kochavi’s July 19th trip to the North African nation, the only video footage that the Arabic-language French public broadcaster supplied was of a small-scale anti-Israel demonstration in which Moroccan participants carried signs denouncing the guest as a “war criminal” and a “child killer.”

The footage did not include a single frame of Kochavi meeting his counterparts, disembarking from his plane or otherwise sojourning in Morocco. The insignificant demonstrations were not noted in the straightforward narration by broadcaster Jaafar Aroum, who reported:

Israeli Chief of Staff Aviv Kochavi arrived in Morocco Monday night on a formal visit, the first of its kind to the kingdom. He spoke with high-ranking military officials as part of the increasing cooperation between the two countries, according to military sources. Last November, Israeli Defense Minister Benny Gantz signed a memorandum of understanding with Rabat establishing security relations with Morocco specifically stipulating intelligence services collaboration, industrial relations development, weapons purchases and joint training.

By running footage only of anti-Israel protests in a report about a state visit while absurdly withholding any footage of the prominent visitor and his meetings, the taxpayer-funded France24 Arabic yet again fails to uphold impartiality.

Last June, a member of the station’s “fact checking desk,” delegitimized Israel on the air, citing “the Israeli entity”. 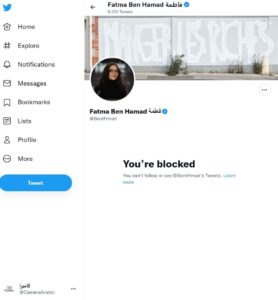 In retaliation for CAMERA Arabic’s release of her name-calling segment with English and French subtitles, Ben Hamad blocked the organization on Twitter.

The Arabic version of this post is available at CAMERA Arabic.