During the month of heightened Palestinian-Israeli tensions starting in mid-April, a period which included Jerusalem riots, attacks against Israeli civilians, the killing of Al Jazeera journalist Shireen Abu Akleh and violence at her funeral, the Arabic-language subsidiary of French public broadcaster France24 churned out a wealth of content, much of it failing to meet basic journalistic standards of accuracy and impartiality.

Owned and operated by the French government via its France Media Monde company, France24’s Arabic platform produced dozens of flawed news items from April 15 to May 15, available on its website and YouTube channel. The most problematic material originated in Arabic, with reports translated into Arabic from France24’s English or French content demonstrating greater restraint.

Adopting Palestinian and Arab nationalist perspectives at odds with well established facts, France24’s Arabic-speaking reporters, hosts and commentators made extensive use of biased terminology and leveled unfounded assertions unseen in the station’s French and English content.

France24’s Arabic problematic record, and the disparity in its Arabic coverage versus French and English content, epitomizes a phenomenon articulated by Saudi diplomat Ambassador Dr. Saud Kateb, who observed in a January 2022 interview:

The problem, I have [repeatedly] said, is that many personas which the foreign channels attract, that the international channels [recruit] for their Arabic subsidiaries, they have agendas, I mean, they have plenty of psychological burdens. Consequently, they largely lack credibility and have specific agendas.

With a deeply partisan agenda weighing heavily on his credibility, Israeli affairs commentator and France24 Arabic regular Khaled Gharabli argued on France24 Arabic that there is no “conclusive scientific evidence” that there was ever a Jewish Temple on top of Temple Mount, despite plenty of historical and archaeological evidence of just that.

In a second news item on the Arabic network, broadcaster Dana Mansour reprised the common Palestinian libel that the 1969 arson attack on Temple Mount was perpetrated by an Israeli “settler” (in fact, culprit Michael Denis Rohan was a mentally unstable Australian Christian tourist.)

Other falsehoods featured in France24’s Arabic coverage of the tumultuous period included the Hamas propaganda claim that the organization holds “four soldiers” in captivity (in fact, there are currently two dead IDF soldiers and two kidnapped mentally ill Israeli civilians in the Gaza Strip); and the unfounded accusation that the 1948 war saw “dozens of massacres” conducted by “Zionist gangs” against Palestinian Arabs. 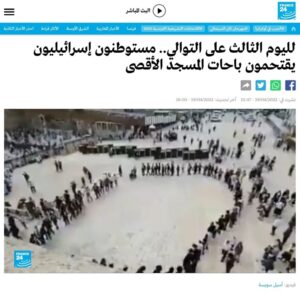 Headline reads: “For the third day in a row, settlers storm al-Aqsa Mosque compounds.” Footage misleadingly feature Jews dancing at the Western Wall plaza, and not on the Temple Mount

Additionally, more than a dozen France24 Arabic items –  most of them by Jerusalem correspondent Laila Odeh – misleadingly referred to nonviolent Jews who visited Jerusalem’s Temple Mount / Noble Sanctuary as “settlers storming the al-Aqsa Mosque.” Odeh also labeled Israel’s internationally recognized territory either “occupied” or “the 1948 territories” four times during the month in question. Her colleagues, including Gaza correspondent Maha Abu al-Kas, called Jewish communities inside the Green Line “settlements” three times, amounting to a total of seven instances during one short month in which France’s public broadcaster deemed Israel in its entirety as illegitimate.In face of multiple requests by CAMERA Arabic for accountability and coverage more in line with France24’s English and French (imperfect although definitely superior) practices, as well as for compliance with the “rigor” and “review” principles articulated in station’s mission statement, France24 Arabic editors almost always fail to deliver.

In terms of responsiveness to public requests for adherence to professional standards and redress of factual errors, France24 Arabic trails far behind the Arabic platforms of both the British and German public broadcasters, BBC Arabic and Deutsche Welle Arabic, respectively. France24’s dereliction of public duty, together with the fact that French taxpayers are fully funding Arabic content which most of them cannot understand, represents a gross miscarriage of public interest.

Hopefully, greater awareness among French citizens about this ongoing problem will promote increased oversight of France24 Arabic on the part of the station’s general management.