With research by CAMERA Arabic

From Iraq to Kashmir, Syria to Sri Lanka, and Lebanon to Afghanistan, leading news photo agencies Agence France Presse and Associated Press have proven to be very well acquainted with the black and white flag of the Islamic State (ISIS). Why, then, when an IS flag emerged last week at a funeral for a Palestinian fighter killed in Jenin, did the photo services suddenly seem to suffer a bout of amnesia?

Over many years, AFP captions have documented the notorious terror organization’s symbol across the Middle East and beyond, identifying the emblem even when it appeared upside down, discarded, and crumpled. Among AFP’s sightings of the distinctive flag were: “Kashmiri protestors hold an Islamic State flag during clashes with Indian government forces” 2018); “Iraqi members of the Hashed al-Shaabi (Populatr Mobilisation units) carry an upsidedown [sic] Islamic State group flag in the city of al-Qaim” (2017); and “a discarded Islamic State (IS) group flag lying on the ground in the village of Baghouz” in eastern Syria (2019). 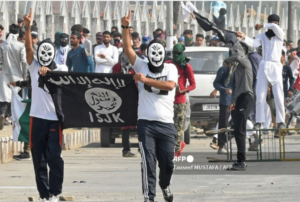 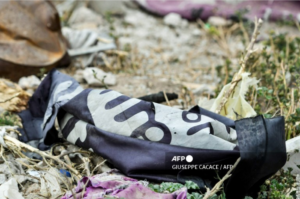 This picture taken on March 24, 2019 shows a discarded Islamic State (IS) group flag lying on the ground in the village of Baghouz in Syria’s eastern Deir Ezzor province near the Iraqi border, a day after IS group’s “caliphate” was declared defeated by the US-backed Kurdish-led Syrian Democratic Forces (SDF). GIUSEPPE CACACE / AFP 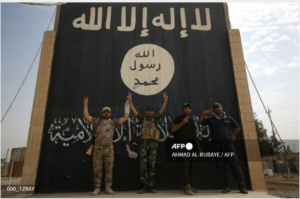 Iraqi forces are seen flashing the sign for victory on November 4, 2017 in the centre of the city of al-Qaim, in Iraq’s western Anbar province near the Syrian border after retaking it from Islamic State (IS) group jihadists a day earlier. Syrian and allied forces converged on holdout Islamic State group fighters in the Syrian border town of Albu Kamal, the jihadists’ very last urban bastion following a string of losses. AHMAD AL-RUBAYE / AFP

In light of the news organization’s demonstrated familiarity with the IS symbol, why didn’t its captions likewise identify the flag for what it is in photographs of a Palestinian funeral Friday? Not only did AFP captions last week merely omit mention of the flag’s presence in the West Bank town of Jenin, they egregiously misrepresented the deadly terror group’s flag as a harmless declaration of Muslim faith, whitewashing it as a “flag showing the seal believed to have been used by Islam’s Prophet Mohamed.” 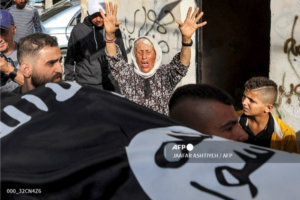 A woman reacts as mourners carry the body of Palestinian Baraa Lahlouh, 24, one of three Palestinians killed during an operation by Israeli forces in Jenin, draped in a flag showing the seal believed to have been used by Islam’s Prophet Mohamed, in the Jenin camp for Palestinian refugees in the occupied West Bank on June 17, 2022. The three men were killed when Israeli forces, who have increased their operations in the area in recent months, opened fire on the vehicle in which the men were travelling. “Fierce clashes” were happening in the area at the time, according to Palestinian news agency Wafa. The Israeli army said in a statement that its troops had been conducting an operation in Jenin to search for weapons at two different locations, had come under fire as they arrived at the first location, and retaliated before identifying a suspicious vehicle on their way to the second location.
JAAFAR ASHTIYEH / AFP 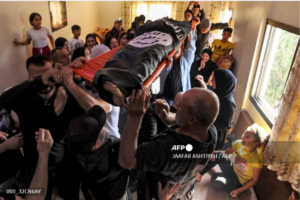 Mourners carry the body of Palestinian Baraa Lahlouh, 24, one of three Palestinians killed during an operation by Israeli forces in Jenin, draped in a flag showing the seal believed to have been used by Islam’s Prophet Mohamed, at his family home in the Jenin camp for Palestinian refugees in the occupied West Bank on June 17, 2022. . . . . JAAFAR ASHTIYEH / AFP

While the writing within the white circle (“Mohammed is the messenger of God”) is indeed the text which is believed to have appeared on Mohamed’s seal, the placement of these words in a white circle on a black background with the words “No god but Allah” on the top is the unique ISIS flag, as AFP has correctly recognized in many countries and on countless occasions in the past.
That composition — “Mohammed is the messenger of God” in a white circle on a black background with “No god but Allah” — is precisely what appears in the Jenin photographs, just as it appeared in the scenes from Iraq, Syria and Kashmir. In Iraq, Syria and Kashmir, AFP knew very well the significance of that symbol, and communicated the information to its news consumers. In Palestinian Jenin, however, the news agency deliberately misled its customers about the flag’s meaning.

Associated Press, for its part, simply ignored the flag’s presence.

Mourners carry the body of Palestinian Bara Lahlouh, 24, at his family home, in the West Bank town of Jenin, Friday, June 17, 2022. Israeli forces shot dead Lahlouh and another two Palestinians and wounded eight others early Friday during a military operation in the occupied West Bank town of Jenin, the Palestinian Health Ministry said. The military said the troops traded fire with militants. (AP Photo/Nasser Nasser)

Like AFP, AP has in the past easily identified its fair share of IS flags in a variety of locations, including Syria, Sri Lanka, Kashmir and Lebanon. 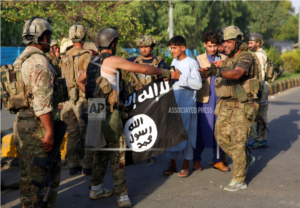 An Afghan security personnel holds the Islamic State group’s flag after an attack in the city of Jalalabad, east of Kabul, Afghanistan, Monday, Aug. 3, 2020. An Islamic State group attack on the prison in eastern Afghanistan holding hundreds of its members raged on Monday after killing people in fighting overnight, a local official said. (AP Photo/Rahmat Gul) 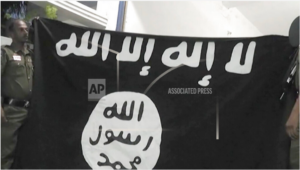 In this Friday, April 26, 2019, image made from video, officers hold up an Islamic State group flag in Arabic that reads: “There is no God, but Allah” and “Allah, Prophet, Muhammad” during a raid on a house in Sainthamaruthu, Sri Lanka. Militants linked to Easter suicide bombings opened fire and set off explosives during a raid by Sri Lankan security forces on the house in the country’s east, leaving behind a grisly discovery Saturday: 15 bodies, including six children. (AP Photo) 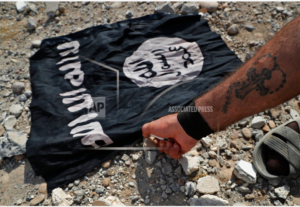 A fighter of Christian Syriac militia that battles the Islamic State group under the banner of the U.S.-backed Syrian Democratic Forces, burns an IS flag on the front line on the western side of Raqqa, northeast Syria, Monday, July 17, 2017. U.S.-backed Syrian fighters fought Islamic State militants in the heart of Raqqa, the extremists’ self-styled capital, as scores of civilians fled areas controlled by the group. (AP Photo/Hussein Malla) 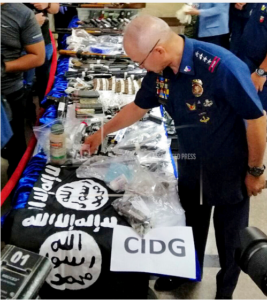 FILE – In this Feb. 1, 2019 file photo, a flag of the Islamic State group and some of the weapons they used in battle, are on display in the Popular Mobilization Forces War Museum in Baghdad, Iraq. U.S. and Iraqi officials say IS fighters facing defeat in Syria are slipping across the border into Iraq, where they are destabilizing the country’s fragile security. Hundreds — likely more than 1,000 — IS fighters have crossed the open, desert border in the past six months. (AP Photo/Khalid Mohammed, File)

It’s not the first time, by the way, that the flag of a terror organization plainly visible in an Associated Press photograph of a Palestinian scene did not warrant mention in the accompanying caption. Just last month, CAMERA’s Israel office prompted correction of an AP caption which ignored the appearance of Hamas’ flag at the top of the Temple Mount, Judaism’s holiest site and the third most sacred site in Islam.

CAMERA has reached out to both news organizations to request clarifications noting the presence of the IS flag at the Jenin funeral. As of this writing, neither news organization has corrected.

When it comes to news coverage of the Palestinian arena, the facile effacement of a flag which represents mass brutalization, enslavement, murder and terror across so many countries, targeting Muslims and non-Muslims alike, is astounding.

Clarity about the terror group which has inflicted deep suffering across broad swathes of humanity doesn’t hold a candle when it comes to the paramount cause of providing favorable coverage of Palestinians.