More than 70 million people throughout the world have been displaced by wars, violent disputes and persecution, according to data from the UN High Commissioner for Refugees issued in advance of the first Global Refugee Forum, which opens Monday morning in Geneva.

According to the statistics, some 26 million people, half of them younger than 18, have fled their native lands and cannot return, including 5.5 million Palestinians. Of the other refugees, more than two-thirds are from only five countries: Syria (6.7 million); Afghanistan (2.7 million); South Sudan (2.3 million); Myanmar (1.1 million); and Somalia (900,000). (Emphasis added.)

Haaretz‘s claim that, according to the UN, 5.5 million Palestinians have allegedly “fled their native lands,” is based on a gross misrepresentation of the UN High Commissioner for Refugees (UNHCR) data. Indeed, twice, the UNHCR data mentions “Palestine refugees,” and twice – significantly – the UN agency specifies that these people are refugees “under UNRWA’s mandate,” referring to the United Nations Relief Works Agency for Palestinian Refugees, a UN body which handles only one group of refugees in the world: Palestinian. The rest of the refugees in the entire world are refugees “under UNHCR’s mandate,” as noted in the UN data.

While the UNHCR report does not spell out the significance of the distinction, the distinction is nevertheless critical. By completely dropping the distinction, Haaretz egregiously distorts the data, thereby confounding the descendants of millions of children, grand-children, and great-grandchildren of Palestinian refugees with those who “fled their native lands.” 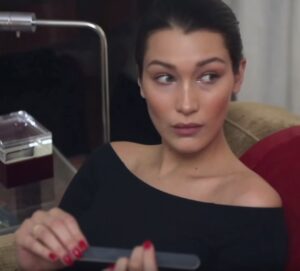 American model Bella Hadid, born in Washington DC, falls under UNRWA’s mandate for “Palestinian refugees,” but is not a refugee under UNHCR’s mandate (Photo by Doug Inglish, Love Magazine/Wikimedia)

“Refugees are people fleeing conflict or persecution,” explains the UNHCR. But UNRWA’s unique mandate, which applies only to Palestinian refugees, ensures that the descendants of 1948 and 1967 Palestinian refugees, unlike all other refugees in the world, continue to receive refugee status for perpetuity, without regard to need or citizenship elsewhere. Thus, according to the UN agency devoted to a singular group of refugees, “Persons who meet UNRWA’s Palestine refugee criteria” are:

These are persons whose normal place of residence was Palestine during the period 1 June 1946 to 15 May 1948, and who lost both home and means of livelihood as a result of the 1948 conflict. Palestine Refugees, and descendants of Palestine refugee males, including legally adopted children, are eligible to register for UNRWA services.

Moreover, when it comes to displaced populations around the world (excluding Palestinian refugees), the UNHCR distinguishes between “displaced,” who were displaced from their displaced from homes but remained in the same country, and “refugees,” who were forced out of their countries. Out of the original estimated 750,000 Palestinian refugees displaced from their homes, the majority remained within the West Bank or Gaza. If UNHCR’s definition were to have been applied to Palestinians in 1948, the majority would have been considered “displaced,” and not “refugees.”

CAMERA contacted Haaretz to request correction of the false assertion that 5.5 million Palestinians fled their native lands, but as of this writing the media outlet has failed to set the record straight.