(This article was originally posted on CAMERA’s campus blog on November 15, 2019.)

Oberlin College of late has had a raft of bad publicity over a multi-million dollar verdict against it for defamation, as well as over its hiring, and then after outside pressure, firing, a professor who posted antisemitic conspiracy theories on Facebook. One might think at this point that the school would be trying to rehabilitate its image. Instead, this semester Oberlin is cementing its reputation as a school gone-off-the-rails by featuring speaker Eli Valley in a major campus talk, to be followed days later by Norman Finkelstein.

Eli Valley is a cartoonist who, like some few Jews throughout history and to this day, uses his Jewish heritage as a cover for his own virulent antisemitism. In 2015, he published a cartoon that depicted the leader of Hillel saying, “Hillel provides a safe space to nurture core Jewish values: monotheism, belief in Israel, and cannibalism.” The same cartoon featured then-director of the ADL Abraham Foxman saying, “anti-cannibalism is antisemitism.” More recently, one of Valley’s cartoons showed Jewish Republicans hoping to “make America Judenrein” (i.e., Jew-free). Another featured Israeli Prime Minister Benjamin Netanyahu saying the charoset at the Passover Seder “symbolizes the unbreakable alliance between Zionists and neo-Nazis across the world.” Yet another put a Gaza Palestinian trying to breach the border with Israel in the place of a Jew in the Warsaw Ghetto, with Israelis taking the role of Nazis.

It’s no wonder that his work has been called “disgusting,” (Alan Dershowitz), “one of the most anti-semitic things I’ve ever seen,” (Meghan McCain), and “Grotesque. … Wretched,” (Bret Stephens). Valley embraces these epithets, and the Oberlin student groups who are bringing him use them as a badge of honor to advertise the talk. Last spring, when Valley was invited to Stanford University, a Stanford law student wrote in the student paper, “elevating Mr. Valley’s work has nothing to do with peace in the Middle East, and everything to do with the free-form hatred that gloms onto Jews and the Jewish State alike. It is so far over the line, so feral and despicable, that words fail.” 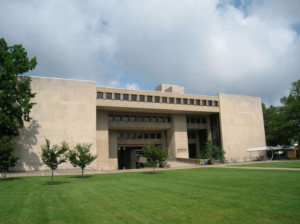 Comparisons of Israel to Nazis and depictions of Jews as bloodthirsty, such as those found in Valley’s work, are considered antisemitic according to the Working definition developed by the International Holocaust Remembrance Alliance and adopted by the United States Department of Education. Even by this standard, however, Valley’s images are particularly heinous.

Valley’s talk is scheduled to be held on Tuesday in the largest lecture hall on Oberlin’s campus. By allowing its flagship Nancy Dye Hall to be used as the venue, the College demonstrates that it embraces this hateful speaker.

But bringing Valley to campus, it appears, is not enough for Oberlin’s “Jewish Voice for Peace” and Students for a Free Palestine. He is to be followed, two days later, by Norman Finkelstein. Finkelstein was denied tenure at DePaul University for his failure to “respect and defend the free inquiry of associates.” He is also well-known for his work “accusing Jews of exploiting the Holocaust for monetary gain” and for his support for the terror group Hezbollah. He’s called Israel “a Sparta-like society consumed by revenge, the thirst for blood.” Just a few weeks ago, Finkelstein called an IDF veteran a “concentration camp guard,” and called Israelis “biped bloodhounds drinking the blood of one million [Palestinian] children.” This is literally the medieval blood libel that historically incited pogroms in which Jews were murdered.

Meanwhile, a person connected with the school has attempted to bring Hen Mazzig, a gay Mizrachi Israeli Jew who speaks frequently on college campuses, delivering a pro-Israel perspective, to Oberlin. This person was unable to get any sponsorship for the event. 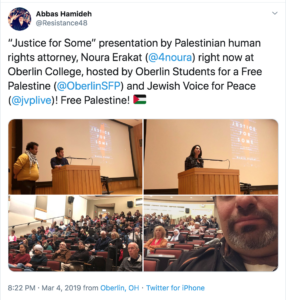 In recent semesters, Oberlin has featured antisemitic speaker Ali Abunimah and anti-Israel propagandist Noura Erakat. Erakat was accompanied to Oberlin by Abbas Hamideh, whose twitter handle, @Resistance48, embodies his opposition to Israel’s existence and embrace of violence to achieve that goal. Hamideh is described by the ADL as “a Cleveland, OH-based activist for issues related to Palestinians who has a record of praising terrorist groups including Hamas and Hezbollah, equating Zionists with Nazis, and denying Israel’s right to exist.”

For years, the school has ignored complaints from its own alumni about the imbalance of anti-Israel events and speakers and the resulting indoctrination. Oberlin should serve as a warning of what can happen in a place where only one point of view is permitted, and all opposing perspectives are silenced. It is becoming a caricature of the liberal institution it once was, and a bastion of intolerance where the oldest hatred, antisemitism, flourishes. 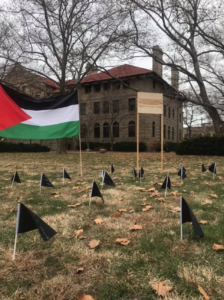 UPDATE: Shortly after this article was published on CAMERA’s campus blog, students at Oberlin create a memorial for Palestinian Islamic Jihad terrorists. The Algemeiner reported:

Oberlin Students for a Free Palestine shared in a Facebook post on Thursday that it had installed a display in “commemoration of the 34 Palestinians killed by Israeli rocket fire this last week” in Wilder Bowl, a central outdoor space on campus where students often congregate.