A recent column in the Forward by Peter Beinart continues the publication’s pattern of printing grossly inaccurate factual claims in its opinion section. (“The Problem With Settlements Is Not That They Are Illegal. It’s That They Are Immoral,” November 19, 2019.) Once again, the Forward has forgotten that, while their contributors are certainly entitled to their own opinions, they are not entitled to their own facts.

In fact, according to the Israeli Central Bureau of Statistics, 900 Israeli Arabs live in Israeli communities in Judea and Samaria. Adalah, the Legal Center for Arab Minority Rights in Israel, has stated that, “the establishment of a town for Jews only is forbidden by [Israeli] law.” As Beinart himself points out, Israelis who live in the settlements are subject to Israeli law. Any attempt, therefore, to create a “Jewish-only” settlement in the territories would be contrary to law.

Indeed, Lt. Col. (res) Maurice Hirsch, the Head of Legal Strategies for Palestinian Media Watch, confirmed to CAMERA that, “there is no law that prevents non-Jewish Israelis from purchasing or renting a home in Judea and Samaria. Even if there were such a clause in a contract [i.e., a restrictive covenant], it would be unenforceable.”

In contrast, Beinart ignores that the Palestinian Authority (PA) jails Palestinian Arabs who sell land to Jews, and insists on a future state that is Jew-free. He ignores, too, that Jews were ethnically cleansed from this land in 1948, and that some of these settlements include people returning to the land from which they or their families had been ethnically cleansed. In fact, it is Beinart who is supporting segregation, by validating the idea that Jews should be barred from residing in a certain location. 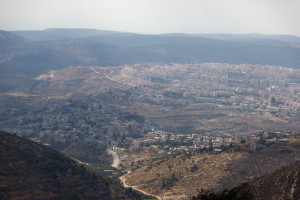 This is so even despite his pretense that “morally, the issue is not whether Jews have the right to live in the West Bank. It’s whether Jews have the right to live there under a different law than their Palestinian neighbors.” He then cites issues such as water and discrimination. But if Beinart really believed that the issue was not with the existence of settlements, but with water, discrimination, and the manner in which they are governed, he would not agitate against settlements altogether, he would just advocate on those specific issues. He doesn’t.

Moreover, the reason that Palestinians and Israelis live under different sets of laws in the West Bank is because, on the one hand, Palestinian leaders have refused to create a state there, and on the other, Israel has not applied its sovereignty there. Is Beinart advocating that Israel do so, and create a one-state solution? If so, he should state this clearly, rather than obfuscating with the baseless Jim Crow claim – an inflammatory claim that seems intentionally designed to further divide the African American and Jewish American communities. He should also be honest about what such a state has the potential to look like.

Similarly, Beinart’s assertion that “almost 40% of the land on which settlements reside was once owned by individual Palestinians,” is based on an old Peace Now report that CAMERA debunked over a decade ago. (He also relies on Wikipedia.)

His claim that, “Palestinians are Israeli subjects: Permanently barred because of their ethnicity and religion from citizenship in the country in which they live,” while hyperbolic and propagandistic, is at least more suited to the realm of opinion. It ignores, however, that Palestinians have had ample opportunities for self-determination – but their leaders have rejected those opportunities time, after time, after time. If PA officials do not like seeking Israeli permission to travel, they should stop paying for terror and sit down with Israelis to negotiate borders. His claim that “the PA is not a government; it is Israel’s subcontractor,” echoes Hamas’s anti-Fatah propaganda and is nonsensical in light of PA refusal to cooperate with Israel on water issues, which causes the “constant shortage of water” of which he complains, PA penalties for land sales to Jews, and PA refusal to negotiate with Israel.

The Forward has also compiled, “Understanding Israeli Settlements: A Reading Guide,” which included, in addition to this piece, two other opinion pieces the Forward published that opposed Secretary Pompeo’s announcement and one that, while thoughtful, didn’t come down on either side.  Contrary to what Editor-in-Chief Jodi Rudoren described on a recent Facebook live chat as a “vigorous and raucous opinion debate,” on this issue at least, it’s an echo chamber.

Even so, publishing opinion pieces that represents only one side of an issue is one thing. Allowing the authors to make false statements is another thing entirely.