In response to communication from CAMERA’s Israel office, Haaretz‘s English edition today commendably amended two reports which whitewashed the crimes of Pakistani terrorist Aafia Siddiqui as “alleged,” when in fact she was convicted of attempted murder in 2010.

Both articles were attributed to Reuters, though the news agency in fact had explicitly noted Siddiqui’s conviction, and did not use the “alleged” qualification.

Dubbed the “Lady Al-Qaida,” Aafia Siddiqui, 42, is a Pakistan-born, U.S.-educated neuroscientist who was sentenced to 86 years in a U.S. prison in 2010. She allegedly attempted to shoot Americans who were questioning her in Afghanistan.

The second article, a Jan. 15 piece with a byline indicating both Reuters and AP, reports (“All Hostages Released Unharmed After Texas Synagogue Standoff, Captor Dead“):

Dubbed the “Lady Al-Qaida,” Aafia Siddiqui, 42, is a Pakistan-born, U.S.-educated neuroscientist who was sentenced to 86 years in a U.S. prison in 2010. She allegedly attempted to shoot Americans who were questioning her in Afghanistan.

In its article about the hostages’ escape, Reuters, on the other hand, clearly states that she was convicted of murder:

A U.S. official briefed on the matter told ABC News the hostage-taker had claimed to be the brother of Pakistani neuroscientist Aafia Siddiqui, who is serving an 86-year U.S. prison sentence for her 2010 conviction for shooting at soldiers and FBI agents, and that he demanded she be freed.

Aafia Siddiqui, who is serving an 86-year federal prison sentence on a 2010 conviction for shooting at soldiers and FBI agents . . . 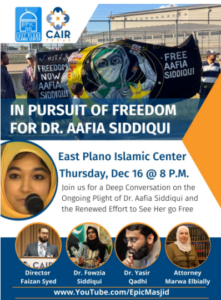 Language which whitewashes Siddiqui’s conviction plays into the hands of organizations like the Council on American-Islamic Relations, which has maintained her innocence and campaigned for her release.
To its credit, Haaretz quickly amended both reports, which now accurately state that Siddiqui “was sentenced to 86 years in a U.S. prison in 2010 for shooting at Americans who were questioning her in Afghanistan.”
Separately, on Jan. 18, Haaretz published an informative Op-Ed about Siddiqui by Kunwar Khuldune Shahid (“The Al Qaeda Operative, Antisemite and Pakistani National Hero Who Inspired the Texas Synagogue Terrorist“):

Siddiqui’s links to Al-Qaida and Jaish-e-Muhammad, a terrorist group with ties to al-Qa’ida and the Taliban, have been well established by Afghan, Pakistani and U.S. intelligence. When she was first detained in Afghanistan, she was said to be carrying plans for a “mass casualty attack” at U.S. sites, including the Brooklyn Bridge, the Statue of Liberty and the Empire State Building, documents related to weaponizing the Ebola virus as a weapon, and instructions on how to make chemical weapons. …
While domestic Islamist parties have rallied for her release over the past 14 years, Siddiqui’s name doesn’t only resonate in Pakistan. Vows to avenge Siddiqui, and offers to exchange prisoners with her, have come from major global jihadist outfits, including the Taliban, Al-Qaida, and ISIS, with attacks being orchestrated as a persuasive tactic towards this aim. Indeed, 57 people have already been killed over the years by jihadis seeking Siddiqui’s release. …
In addition to jihadists, radical Islamist preachers, even in the West, have rallied behind Siddiqui as a symbol of the West’s alleged victimization of Muslims. Even nominally non-Islamist Muslim representative groups, like the Council on American Islamic Relations (CAIR), have designated advocacy days for Siddiqui and not for any of the many other Muslims, including women, being denied fundamental rights in American prisons. …

In a letter to Barack Obama, she wrote that Jews are “cruel, ungrateful, backstabbing… [which is] why ‘holocausts’  keep happening to them repeatedly.” She even cited Quranic verses asking Muslims to “not take Jews and Christians as allies,” while deriding Pakistan for allying with the U.S. to capture the 1993 World Trade Center bomber Ramzi Yousef. Almost laughably, Siddiqui’s trial lawyer claimed her client was “not antisemitic but pro-Palestinian.”

So how did the so-called ‘representative’ and certainly high-profile Muslim organization CAIR respond to the synagogue attack?
While it condemned it, they obviously did so without calling it out as a jihadist attack. Instead, CAIR’s statement makes it appear as though a deliberate attack on a synagogue in the name of a prominent antisemitic jihad sympathizer (if not jihadist) is incomprehensible, even when synagogues, from Paris to Istanbul, Djerba to Copenhagen, have been consistent targets of Islamist terror. CAIR, hence, is also unlikely to address its own antisemitic or jihadist roots, which prompted even the UAE to list it as a terrorist group.

Populist leaders in the Muslim world who push an Islamist narrative studded with antisemitic tropes, like Turkey’s Recep Tayyip Erdogan and Pakistan’s Imran Khan (who likes to equate caricatures of Muhammad with the Holocaust) do so in the name of “protecting” Muslims. Groups like CAIR in the West are their back-up. Meanwhile, jihadist attacks on Jews will continue to be glorified as “resistance” – to Jewish plots or Zionist imperialism – across the globe.