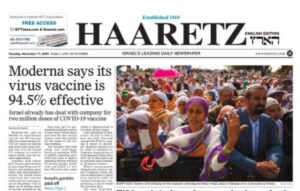 CAMERA’s Israel office today prompted correction of a Haaretz caption which falsely depicted a mass violation of coronavirus restrictions on the part of Ethiopian Jews. The caption accompanied the page-one six-column color photograph in Haaretz‘s English print edition yesterday showing a large, tightly-packed crowd of Ethiopian Jews celebrating the Sigd holiday. There was not a single mask in sight. The caption for what was arguably the most prominent item in that day’s paper stated:

HAPPY SIGD: Members of the Ethiopian Jewish community celebrating the holiday of Sigd, unique to Ethiopian Jewry, in Jerusalem on Monday.

Could it be that in the midst of the coronavirus crisis, a massive crowd of Ethiopian Jews gathered, in violation of the law and without taking any of the necessary safety precautions?

Yesterday, CAMERA contacted Haaretz editors, questioning whether the image was indeed from this year, pointing to Jerusalem Post images of this year’s Sigd event mask-wearing and social distancing at a sparsely populated event in the Jerusalem neighborhood of Armon Hanatziv.

In response to communication from CAMERA, on page 4 today Haaretz ran a photograph by Nir Pour showing this year’s socially-distanced Sigd celebration. Today’s caption notes that the scaled-down ceremony was held in compliance with coronavirus regulations and clarified that yesterday’s photograph was from 2018. The accompanying caption stated:

Members of the Ethiopian Jewish community celebrating a socially distanced and coronvirus-responsible Sigd festival at the Armon Hantaziv promenade in Jerusalem on Monday. The holiday, unique to Ethiopian Jewry, was officially recognized by the State of Israel in 2008. Monday’s scaled-back ceremony was attended by Kessim (religious leaders) as well as political leaders, including Aliya and Integration Minister Pnina Tamano-Shata — the first Ethiopian-born woman to serve in the Knesset. The photograph which erroneously appeared on Page 1 of yesterday’s newspaper was taken in 2018. 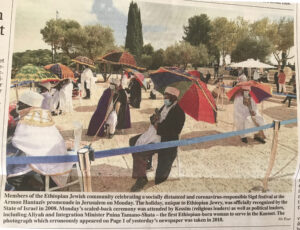 While CAMERA commends Haaretz‘s correction, along with the publication today of a photograph showing this year’s socially-distanced celebration, it is regretful that the page-four clarification appeared much less prominently than the page-one error. Indeed, this CAMERA researcher, who was searching for the correction, missed in until a Haaretz editor specified the page on which it appeared.