In a November 10th Tech News Briefing, “Zoom Tackles Tricky Role of Policing Its Service,” Wall Street Journal tech reporter Aaron Tilley discusses situations in which Zoom was called on to police content on its platform. In one example, he described “things relating to Palestinian rights” and “activists calling it ‘censorship’ to block their events around Palestinians.” 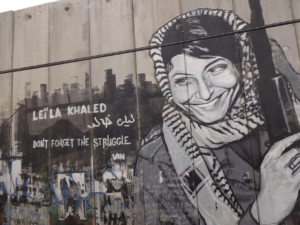 In fact, the event in question, which was cancelled by Zoom, was scheduled to feature a speaker who is best known for airplane hijackings. As the Jerusalem Post noted, Leila Khaled was a member of the Popular Front for the Liberation of Palestine – a group which was designated as a terror organization by the US in 1997. She hijacked an El Al Flight 1970 as well as a TWA Flight in 1969.

As the journalist Jonathan Tobin has pointed out, Khaled would likely be barred from entering the US to give such a talk in person. The event organizers seemed to be attempting to use the proliferation of Zoom events as a back door.

In addition, Zoom reportedly shut down three other events that were supportive of the original, cancelled event with Khaled.

Calling these “events around Palestinians” leaves out information that’s crucial for listeners to understand why Zoom made the decision that it did.

CAMERA has contacted the reporter seeking a correction.

November 25 Update: After contact from CAMERA, the Wall Street Journal has declined to correct this omission.