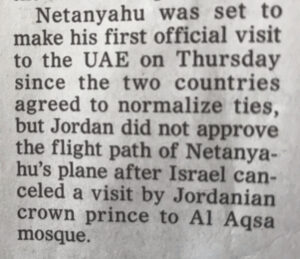 CAMERA’s Israel office today prompted correction after Haaretz‘s English edition erroneously reported that Israel cancelled the Jordanian crown prince’s planned visit to the Al Aqsa mosque. A blatant example of what CAMERA calls “Haaretz, Lost in Translation,” the English edition’s reporting was diametrically opposed to the parallel Hebrew edition, which correctly reported that it was Jordan that cancelled the trip to Jerusalem’s Temple Mount.

Netanyahu was set to make his first ofiicial visit to the UAE on Thursday since the two countries agreed to normalize ties, but Jordan did not approve the flight path of Netanyahu’s plane after Israel canceled a visit by Jordanian crown prince to Al Aqsa mosque.

The digital version of the same article had different wording. Its formulation was ambiguous and the grammar was not at all clear as to which side cancelled the visit: Jordan or Israel. The digital article reported:

Jordanian Foreign Minister Ayman al-Safadi told CNN that Jordan is “angry” with Israelafter it canceled a visit by Jordanian Crown Prince Hussein bin Abdullah to Jerusalem’s Al-Aqsa mosque compound on Wednesday over a dispute regarding security arrangements at the site. Prince Hussein was meant to bring 50 security guards.

The previous day Jordanian crown prince Hussein cancelled his planned visit to the Temple Mount because of a disagreement over the security arrangements during the visit to the site. 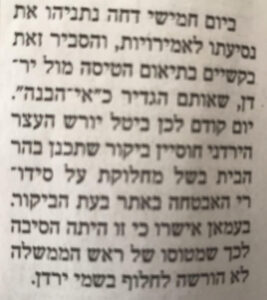 In response to communication from CAMERA, Haaretz yesterday amended the digital article so that it now clearly states that Jordan cancelled the trip:

Moreover, Haaretz published the following correction today on page 2 of the print edition: