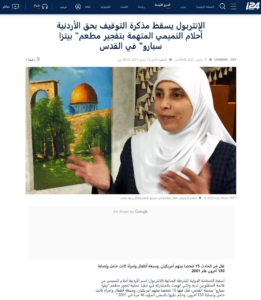 i-24’s headline before the correction

The accompanying article also described Tamimi as merely “accused of participation” in the August 2001 attack.

However, Tamimi is not just “accused” of participation in the Sbarro bombing; an Israeli court found her guilty of assisting the attack. Furthermore, she herself regularly boasts about her role in the attack, which killed 15 innocent civilians, including seven children and a pregnant woman. Another civilian victim remains in a coma to this day.

In addition, the body now reads that “An Israeli court convicted her for involvement in carrying out” the bombing attack. Regrettably, the article still fails to note that Tamimi herself admitted to her heinous deeds on several occasions and takes great pride in them even today, almost 20 years later.

To read this article in Arabic, visit CAMERA Arabic.