Contradicting its own previous coverage as well as the actual geography, Haaretz erroneously reported last week that construction in the area known as E-1, between Jerusalem and Ma’aleh Adumim to the east, would divide the West Bank in two. The Oct. 4 article, “Israel Holds Hearing on E1 Construction Plan Without Palestinian Objectors” errs: “Criticism of the E1 plans stems from the fact that construction in the area will cut off the north of the West Bank from the south, hindering the creation of a future Palestinian state.” (Emphasis added.) 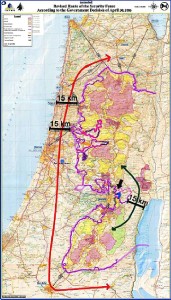 While critics maintain that E1 construction would cut off the north of the West Bank from the south, a look at the map (at left) demonstrates that the claim is inaccurate, and hardly a fact. As CAMERA’s Ricki Hollander and Gilead Ini detailed in 2012, those who charge that Israeli building west of Ma’aleh Adumim severs north-south contiguity disregard the fact that the northern and southern parts of the West Bank are connected by land east of Ma’aleh Adumim that is at its narrowest point about 15 km wide (about the same width as the narrowest point from the Mediterranean to the Green Line).

Indeed, in a December 2012 correction, The New York Times clarified the identical issue:

An earlier version of this article referred imprecisely to the effect of planned Israeli development in the area known as E1 on access to the cities of Ramallah and Bethlehem from Jerusalem, and on the West Bank. Such development would limit access to Ramallah and Bethlehem to only narrow corridors far from the Old City and downtown Jerusalem. It would also create a large block of Israeli settlements in the center of the West Bank; it would not divide the West Bank in two.

After the New York Times’ editorial page lashed out at Israel over its construction plans in an area called E-1, the paper issued a correction on Sunday morning, stating that the expansion would neither cut off Ramallah and Bethlehem from Jerusalem, nor divide the West Bank.

Q. The world is saying that building in the area will cut the two parts of the West Bank off from each other. Is that correct?

A. Yes and no. Since Palestinians are forbidden to enter Jerusalem, the traffic from the northern part of the West Bank to the southern part goes through Azariya, Wadi Nar and Abu Dis. This is a terrible and extremely hilly access route, which runs though populated areas and routinely has traffic jams. In normal transportation planning, it would be necessary to build a new road, part of which would go through E-1. In the past, Israel had an alternative plan: Highway 80, which was supposed to bypass Ma’aleh Adumim to the east in a huge ring and would link the northern and southern parts of the West Bank. 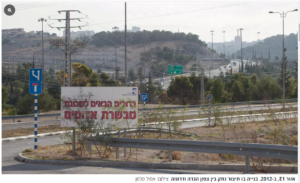 A photo caption in the Hebrew edition (at left) also contains the erroneous statement that E1 construction would divide the West Bank. The Hebrew article itself is more cautious, attributing the claim to critics (although a comment noting the 15 kilometers to the east which allow for contiguity would have been informative).

Separately, Haaretz‘s Oct. 4 English digital article inexplicably links the words “the creation of a future Palestinian state” to Gideon Levy’s Op-Ed (“Say it With Me: Bennett Is Creating an Apartheid State“).

CAMERA communicated with editors concerning the contiguity fallacy and the news article’s link to Levy’s irrelevant and vitriolic “Apartheid will be Israel’s middle name” Op-Ed. Haaretz declined to address the issues.