Bush had angered Shamir and American Jews the year before when he blasted illegal Israeli settlements in “the West Bank and East Jerusalem”… (“Bush Sr. Was a Republican Realist Who Clashed With Israel While Saving the World,” in print on Dec. 2, and online here)

Shalev’s reference to “illegal Israeli settlements” was bizarre and misleading, given that the President had never designated them as such. Nor is it generally Haaretz practice to refer to settlements (aside from small outposts deemed illegal by the Israeli government) as “illegal.” Yet the characterization of the settlements as “illegal” was even more puzzling and problematic in the Hebrew version of Shalev’s article as it appeared within the quotation marks, as if Bush himself had actually referred at some point to “illegal settlements in the West Bank and East Jerusalem.”

Extensive searches do not term up any indication at all that president Bush called the settlements “illegal.” To the contrary, James Baker, Bush’s secretary of state, stated during a July 20, 1991 press conference in  Jedah, Saudi Arabia:

Our particular opposition today to settlement activity is that it constitutes an obstacle to peace. In the past, the position of the United States has been that it was, in fact, illegal.

In response to a reporter’s question – “But that’s not this administration?” – Baker answered: “That is not our policy. No.” 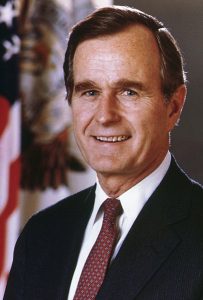 In other words, the Bush administration’s position was that settlements impede the peace process, but they are not contrary to international law per se. In fact, that was the position of all U.S administrations after Jimmy Carter, from Reagan to Obama.

CAMERA has prompted corrections on this point at numerous media outlets, including The New York Times, The Washington Post, The Boston Globe, Times of London, Times of Israel, ABC News and Associated Press. And that’s only a partial list.

In response to communication from CAMERA, Haaretz English edition editors have removed the erroneous reference to “illegal.” The amended text now states:

In addition, editors commendably appended a correction to the bottom of the article, alerting readers to the change. The correction states:

The article previously stated incorrectly that President George H.W. Bush referred to Israeli settlements in the West Bank as “illegal.”

For the Hebrew version of this post by Shlomi Ben-Meir, please see Presspectiva.

This article was updated to reflect the fact that Haaretz commendably appended a correction to the bottom of the article alerting readers to the change. In addition, Haaretz’s Hebrew edition has also corrected.